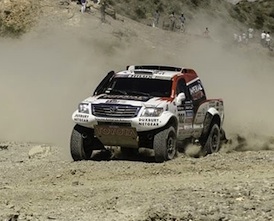 Giniel de Villiers and Dirk von Zitzewitz moved up to fifth place in the overall Dakar Rally standings after finishing day five of the event in second place.

The Hilux pair narrowly missed out on their first stage win, completing the Chilecito to Tucumán route just four minutes behind Nani Roma in the MINI.

De Villiers and von Zitzewitz were among the fastest pairs to come through a hard-to-negotiate dune section, in which all the top duos struggled to find the right way. Although they lost time to two punctures in the opening section and a brake problem in the final 50 kilometres, Toyota Imperial duo climbed one position in the overall rankings.

They are now fifth after five special stages, less than ten minutes behind the third-placed car. As such, they are still within striking distance of the podium. And yet the prospects did not look great prior to the start of the fifth special stage – minor technical problems with the hydraulic systems had seen them drop well back on the first four days.

After the day’s racing, de Villiers said: “An intense day. We had two flat tyres that we had to change in the first section today, and lost time as a result. However, Dirk produced a real stroke of genius today and got us through the tricky section, in which everyone was looking for the right route, as fast as anyone.

“We could have made up even more time and probably won the stage if we had not had a brake problem towards the end. Our brakes were only working at about ten per cent for the last 50 kilometres. That is not particularly sexy when you’re driving off-road. All in all, however, it was a good day for us.”

Von Witzewitz added: “This Dakar has been the most eventful for a long time. When you consider what we had to battle with, and then look at the result, it brings about mixed feelings. The good thing is that we are back in a position, from which we can challenge for a place on the podium. Unfortunately we have repeatedly had to overcome minor technical problems – that does not feel so great.

“However, we have still significantly reduced the gap to the opposition, because Giniel was simply brilliant today. I also contributed a little to today’s success, quickly finding a way out of a tricky navigational situation, in which all the top teams failed to find a waypoint. Only Michel Périn did a better job of getting Roma out of there. I am proud to say that both Giniel and I produced a very good display today.”

Read our other Dakar reports here.