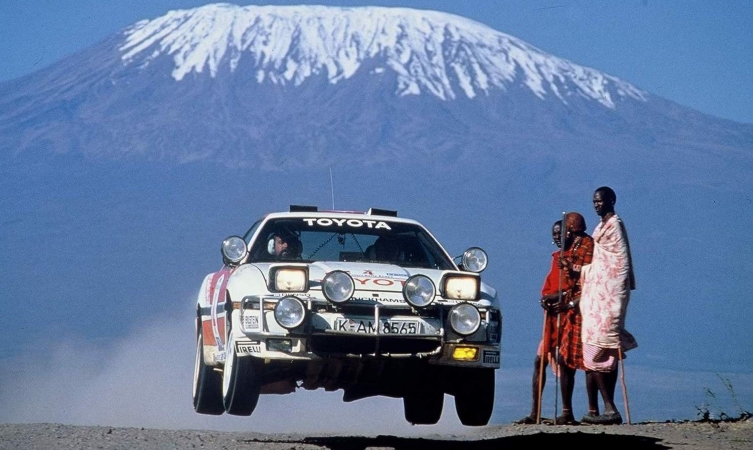 To chart the history of the Toyota Supra, an iconic model that wears what is arguably Toyota’s most famous sports car nameplate, you have to look back 40 years to the latter part of the 20th century.

Toyota originally revealed the Supra name in April 1978, selected as a new suffix designation for a longer, wider and more powerful spin-off of the second-generation Celica coupé (above). The model was additionally identified by its A40 chassis code.

Designed and developed in an effort to compete in the popular grand tourer market in Japanese and North American markets – ruled almost exclusively by Datsun’s Z-cars at the time – the new A40 Celica Supra (named Celica XX in its domestic market) replaced the Celica’s four-cylinder engine range with a silky smooth six-cylinder engine that offered a more luxurious character. And so began the history of the Toyota Supra…

The next step in the history of the Toyota Supra came with the introduction of the A60 Celica XX, launched in Japan in July 1981. Now based on the sharp-suited, third-generation Celica platform, this new model focused on sporting prowess and was sold as the Celica Supra in all export markets.

The new Celica Supra became available in the European market for the first time in August 1982, and enjoyed an additional air of exclusivity in the UK due to its limited supply of just 100 cars per month.

Even though it was identical to the regular Celica coupé from the B-pillar backwards, the Supra’s hallmark long wheelbase and stretched front-end again allowed Toyota to equip its range-topping sports car with a straight-six powerplant, particularly its new 2.8-litre 5M-GE flagship twin-cam engine. Other identifying marks of the second-generation Celica Supra included retractable headlights, a more aggressive flare to the wheel arches and, importantly for enthusiasts, independent rear suspension.

In contrast to the first-generation Celica Supra, whose greatest motorsport achievement was as a pace car in the 1979 US Grand Prix, the A60 enjoyed a fuller career on the track. In the British Saloon Car Championship (forerunner of the BTCC), driver Win Percy saw great success campaigning a Celica and Corolla, so naturally moved to the Celica Supra for 1983.

Percy won the ninth round of the 1984 series outright, fending off Andy Rouse’s 3.5-litre Rover, before bike racing legend Barry Sheene took charge of Percy’s car for the 1985 BSCC season. The same year, Per Eklund was declared Group A champion in the Ulster Rally with his identically liveried, though not works-prepared, Celica Supra.

Toyota ended production of the A60 Celica Supra in December 1985, briefly overlapping the new fourth-generation Celica launched in August. From this point onwards, Celica and Supra diverged to become independent models on different platforms; Celica made the significant shift to front-wheel drive and Supra continued to refine the role of rear-wheel drive grand tourer in the expanding Toyota line-up.

The new A70 Supra – dropping the XX designation from now on – launched in February 1986 with an all-new coupé body that was fractionally shorter than the outgoing Celica Supra. Its elegant bodywork covered a chassis that again narrowed the gap between outright sports car and comfortable cruiser. All four corners benefited from double wishbone suspension – the upper arms being made from forged aluminium to reduce weight – while the suspension links were attached to subframes to minimise vibrations entering the cabin.

In total, four straight-six engines ranging in capacity from 2.0- to 3.0-litre were available in the third-generation Supra, dependent on market. Topping the range was the gutsy 2954cc 7M-GTE turbocharged and intercooled twin-cam engine, delivering 230bhp in the most powerful Japanese 3.0GT Turbo.

The same 7M-GTE unit was later uprated to 270bhp for the limited edition 3.0GT Turbo A. As well as being the fastest Japanese car of the time, this special edition homologated the Supra to compete in Japanese Group A racing, European touring car championships and Group A rallying, where it enjoyed a brief career within the WRC before the high-profile arrival of the four-wheel drive ST165 Celica GT-Four in 1988.

Toyota Supra: brand on the run

The 7M-GTE’s naturally aspirated relative was the launch engine for Supra sales in the UK, which started in July 1986 with a competitive pricing strategy to bring it in line with its rivals despite expensive importation costs. A rear spoiler was fitted to European versions as standard, so the only options were metallic paint, leather upholstery and an automatic gearbox.

But it was the Supra’s superb refinement that stood out to contemporary testers, being virtually unmatched for long-distance motorway cruising while simultaneously receiving praise for the important areas of performance, handling and ride. Indeed, Toyota was on a roll in the UK with its sporting triumvirate of Celica, MR2 and Supra winning an unprecedented one-two-three in What Car? magazine’s Best Coupe award in 1987.

Though Japanese and American buyers had enjoyed turbocharged versions of the Supra for some time, the UK didn’t receive a Turbo version until August 1989, soon after the car’s midlife facelift.

Powered by the same engine as the domestic 3.0GT Turbo, it enticed buyers with 15% greater power and 35% more torque (now 254 lb/ft). Toyota’s halo sports car now reached a top speed of 153mph and dashed to 60mph in 6.1sec, a massive 1.9sec faster than the non-turbo car. Befitting of a time when Miami Vice was the must-see TV programme, the new Supra Turbo was also available in an optional White Pack, where all exterior trim and coachwork – even the wheels – were finished in Brilliant White.

The Japanese car industry experienced a period of phenomenal success through the late Eighties and early Nineties, with Toyota’s rival manufacturers launching vehicles such as the Nissan 300ZX, Mazda RX-7, Honda NSX and Mazda MX-5.

In light of the competition, expectation of an imminent launch of the A80 Supra was high but Toyota continued producing the third-generation until 1992 when it was sure it could debut a new vehicle that would better the best of the current crop. But until that happened, domestic market Supras saw the 7M-GTE replaced by Toyota’s new flagship 2.5-litre twin-turbo engine. It came from the new JZ-series that would go on to become the iconic heart and soul of the next-generation car.

The car in front is a Toyota

The highly-anticipated fourth-generation (A80) Supra was finally unveiled at the 1993 Chicago Motor Show after a four years in development under the guidance of chief engineer Isao Tsuzuki, who had also worked on the first Celica and both generations of MR2.

Unlike anything Toyota had produced before, the A80’s proportions and flowing design owed more to the 2000GT of the Sixties than its predecessor. With a long, low bonnet line and high-rise optional rear spoiler it was aerodynamically efficient and clearly aimed at delivering a much higher top speed.

‘Less is more’ was the key concept during development of the A80, manifested in external dimensions that were shorter, lower and wider than the outgoing car, while the extensive use of lightweight materials helped the engineers lose 100kg of mass compared to its predecessor. Even the carpet fibres were hollow to save weight!

Soon after its June 1993 launch in the US, road-testers were dreaming up new superlatives as the fourth-generation Supra trounced ‘Top Gun’ rivals that had been such a cause for concern only a few years previously. Even the 3.6-litre Porsche 911 Turbo could not beat it, while one Australian magazine pitched the car into an unlikely comparison with the Aston Martin DB7, which the Supra duly won on an objective level.

Plaudits continued to flow in when the UK press got hold of the new Supra, which was only available as a turbo version in Europe. Marginally quicker than the contemporary ST185 Celica GT-Four, the new 2JZ-GTE engine was praised for its flexibility, offering 90% of peak torque all the way from 1,300 to 4,500rpm before being cruelly cut short at 156mph, the car’s aerodynamically-enhanced stability making it feel like it was travelling at half that speed. Subsequent tuning of the 2JZ engine within the enthusiast aftermarket revealed it to be such an engineering master class that heavily modified units have been able to reach up to 2041bhp!

From high to low

Even though its front engine, rear-wheel drive format never altered throughout the history of the Toyota Supra, the Mk4 was by far the most successful in motorsport.

The model won its class in the Swiss Mountain Races, competed at the iconic Le Mans 24hr race two years running, charged up Pikes Peak, was competitive in American SCCA racing, and became a dominant force in the All-Japan GT Championships (JGTC) from 1995 all the way through to 2003. Despite these successes, however, times were changing and worldwide vehicle purchasing trends were slowly moving away from sports cars like the Supra.

When the A80 Supra was discontinued in the UK in late 1996 it had notched up 600 sales from a total of 16,000 Supras sold in the UK across all generations. By the end of 1998 the Supra’s four-generation run in North America had also finished, which left the domestic market carrying on with lowered annual production runs until the car was finally axed in July 2002, primarily because it was deemed too expensive to meet forthcoming exhaust emissions targets. From April 1978 to July 2002, total production of the two Celica Supra and strict Supra generations stood at 593,337 units.

For many years, the thought of a fifth-generation Toyota Supra was merely wishful thinking. But a glimmer of hope was ignited with the unveiling of the dramatic – and clearly Supra-inspired – Toyota FT-1 concept in January 2014. A second version of the front-engine, rear-wheel drive sports car was revealed eight months later, the most noticeable difference being a change in colour from bright red to graphite grey.

Further information on a possible production version of the concept was not forthcoming until Toyota released a shadowy teaser image ahead of the 2018 Geneva International Motor Show. The accompanying text informed the world that “a modern racing concept will signal Toyota’s commitment to bringing its most iconic sports car back to the market.”

The excitement surrounding this announcement was incredible. And the actual car was everything that Toyota enthusiasts could have hoped for. Not only did the Toyota GR Supra Racing Concept revive the name and spirit of the most celebrated model in Toyota’s sports car heritage, it demonstrated Toyota’s commitment to bring the Supra back to the market.

Teasing us further, a Toyota Supra prototype was then revealed, albeit still under heavy disguise, and even test-driven in its near-production-ready state. These early indications were very encouraging, with many reporting that the car was everything that enthusiasts hoped it would be.