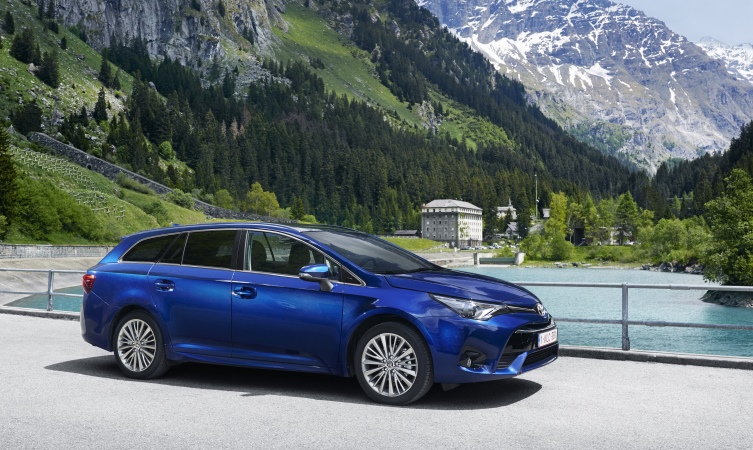 Priced from £19,265 on the road, the Avensis Touring Sports has an impressive new look, upgraded interior and brand new engine options to add to its existing reputation for premium levels of quality, excellent reliability and impressive durability.

Reflecting Toyota’s commitment to ever-greater levels of safety, the 2015 Toyota Avensis Touring Sports is targeting a maximum five-star Euro NCAP safety rating and is equipped with Toyota Safety Sense, a package of active safety technologies designed to keep you and your family safer than ever.

New Euro 6-compliant diesel engines make the 2015 Toyota Avensis Touring Sports both fuel efficient and kinder to the environment, with carbon emissions reduced by as much as 16% over the previous generation Avensis. It’s kinder to your wallet too, with extended service intervals reducing servicing costs by about 20% over three years/36,000 miles.

With four model grades and three engine options, a choice of 12 Avensis Touring Sports models means that there should be a car ideal for you, but if you don’t need quite that much space, then why not take a look at the 2015 Toyota Avensis saloon – you can read our review here.

With dynamic handling, improved ride comfort and a range of responsive engines, the 2015 Toyota Avensis Touring Sports is a rewarding drive in town and out on the open road.

A notable change from its predecessor is the choice of engines: Toyota has introduced two new diesel engines – the 110bhp 1.6-litre D4-D and 141bhp 2.0-litre D4-D – alongside a revised version of the 145bhp 1.8-litre Valvematic petrol engine. The new line-up offers better fuel economy and emissions over the previous generation, and have been tuned for a responsive, engaging drive. A six-speed manual transmission is standard across all engines, with the 1.8-litre petrol also offered with Toyota’s Multidrive S CVT automatic transmission.

The handling characteristics of the 2015 Toyota Avensis Touring Sports have been enhanced by its stiffer bodyshell, optimised suspension settings and fine-tuned electronic power steering. As the Avensis is developed especially for Europe and built right here in Britain, you can be sure that it will deliver the performance and handling that British drivers want.

Quieter, more comfortable and with greater levels of luxury – the 2015 Toyota Avensis offers it all. Improved insulation and noise reduction techniques have created a cabin that is noticeably quieter – for instance, Excel grade models with a Skyview panoramic roof have extra sound insulation in the roof lining.

Across the four model grades – Active, Business Edition, Business Edition Plus and Excel – the interior is elegant and refined, using premium quality materials for the trim and appealing combinations of fabrics including Alcantara and leather upholstery. Toyota has redesigned the front seats to be more supportive and comfortable – essential for drivers who spend most of their day behind the wheel – and even pressing the buttons and switches feels more satisfying!

Equipment levels are high throughout the range. As well as the Toyota Safety Sense active safety package, the entry-level Active model has cruise control, air-conditioning and a Bluetooth-equipped, six-speaker audio system as standard.

Business Edition upgrades the multimedia system to Toyota’s Touch 2 with Go navigation system that has an 8″ touchscreen display and DAB radio, along with features like rain-sensing wipers and automatic dusk-sensing headlights. Business Edition Plus includes leather and Alcantara seats, smart entry and rear privacy glass.

At the top range, the Excel model is fitted with the enhanced Toyota Touch 2 with Go Plus multimedia and navigation system, a 10-speaker audio system, full leather interior, and clever adaptive headlights that shine into corners and junctions to give you a better view of the road ahead.

As a large family estate, the 2015 Toyota Avensis Touring Sports is practical by design. Its spacious boot provides 543 litres of space with the seats up, and that number almost triples to 1,609 litres of space when the rear seats are folded down. All you have to decide is how to fill it!

Inside the cabin, cup holders and numerous cubby holes and storage pockets let you keep everything you need for the daily drive securely stowed while the vehicle is moving.

Like its predecessor, the 2015 Toyota Avensis Touring Sports has achieved the maximum five-star safety rating in official Euro NCAP tests. Its strong construction and passive safety features like SRS airbags create an environment designed to keep occupants safe in the event of an accident.

To avoid a possible collision or lessen the effects of an actual collision, every Avensis Touring Sports model is equipped with Toyota Safety Sense as standard. This suite of active safety technologies includes a Pre-Collision System with Autonomous Emergency Braking, which monitors the road ahead to predict potential collisions, gives visual and audible warnings to the driver and, if necessary, automatically applies the brakes to slow or even stop the vehicle. On Business Edition models upwards, Safety Sense also includes Lane Departure Alert, Automatic High Beam, and Road Sign Assist.

With new diesel engines and improvements to the existing 1.8-litre petrol engine, the Avensis is cheaper to run than ever before.

The new 1.6-litre D4-D desel engine is the most economical of all, achieving up to 67.3mpg on the official combined test cycle. Emissions of as little as 109g/km mean that road tax for the 1.6 D4-D Avensis will cost nothing in the first year and just £20 after that. The 2.0-litre D4-D diesel is close behind, with combined fuel consumption figures of 61.4mpg and costing as little as £30 per annum in road tax from year two.

The 1.8-litre Valvematic petrol engine returns up to 47.1mpg (Multidrive S automatic transmission), with road tax costing from £130 a year.

Servicing costs are kept to a minimum with service intervals extended to 12,500 miles for diesel models, which can save up to 20% on servicing over three years.

The 2015 Toyota Avensis Touring Sports with a 1.8 Valvematic petrol engine and six-speed manual transmission costs from £19,265 on the road for an Active model, rising to £22,495 and £24,295 for Business Edition and Business Edition Plus models respectively. The 1.8 Valvematic is also available with Multidrive S CVT transmission for an extra £1250.

For further information about the 2015 Toyota Avensis Touring Sports, and to arrange a test drive, visit the designated section of the Toyota website.