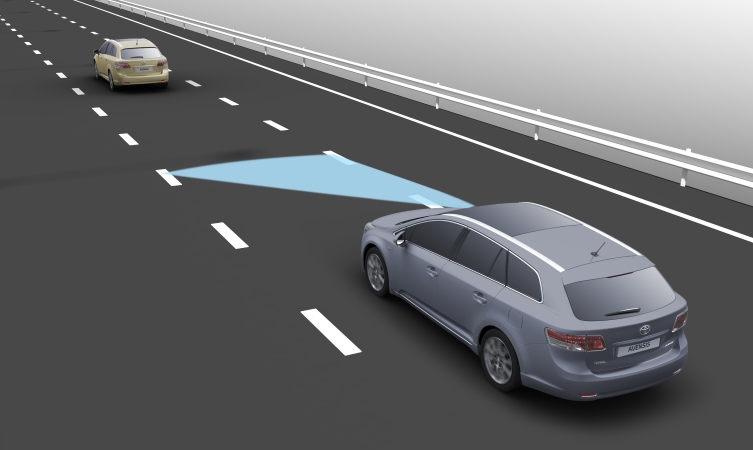 In this post, we take a look at Toyota’s various monitoring systems that keep a close eye on the surroundings when you are parking and driving:

Adaptive Cruise Control (ACC), included as part of the Toyota Safety Sense suite of active safety technologies, adds an extra layer of safety to conventional cruise control, the system by which a car drives at a constant speed set by the driver.

First used in 1997, Toyota added a radar-monitoring system to the cruise control system to create Adaptive Cruise Control which can alter your car’s speed based on the speed of vehicles travelling ahead.

When a slower-moving vehicle is detected, ACC automatically reduces your car’s speed (activating the brakes if necessary) to maintain a safe distance between the two vehicles. If the vehicle in front turns off or speeds up, then ACC will accelerate your car up to its previous cruising speed.

The system uses two cameras mounted behind the rear-view mirror to continually monitor vehicle position in relation to road lane markings. If it detects that the car is drifting out of its lane, LDA triggers an audible and visual warning for the driver to take corrective action.

As part of the Toyota Safety Sense package, Lane Departure Alert is available as standard on the new Prius, Avensis, and Verso. It’s also available as an optional extra on Aygo, Yaris, and Auris models.

Lane Keep Assist (LKA) was introduced in 2004 as an extension of the Lane Departure Warning system. The LKA system activates if it detects that the driver isn’t responding to the lane departure warnings, and will actually apply corrective steering without driver input to maintain a safe course.

Road Sign Assist is one of Toyota’s newest technologies, introduced as part of the Toyota Safety Sense package of active safety systems. It works by identifying road signs such as speed limits, no overtaking warnings, and motorway signage, and displaying them on a multi-information TFT display on the dash. Additionally, RSA sounds a warning light and buzzer if the vehicle exceeds the speed limit.

Road Sign Assist is available on new Prius, Avensis and RAV4 models, as well as optionally fitted to Auris models.

Blind Spot Monitor (BSM) is one of Toyota’s latest safety monitoring systems, using radar sensors to constantly observe the area in the driver’s blind spot for the presence of other vehicles. If the turn indicator is activated, BSM warns the driver by activating an indicator in the door mirror on the appropriate side of the vehicle.

Using the same sensors as Blind Spot Monitor, the Rear Cross Traffic Alert (RCTA) system warns the driver of unseen vehicles approaching from either side that aren’t visible through the rear screen or mirrors, such as when reversing out of a parking space. If a vehicle is detected, RCTA sounds a warning and flashes the warning lights in the door mirrors.

Like Blind Spot Monitor, the RCTA system is available on the new Prius, revolutionary Toyota Mirai and Land Cruiser.

Intelligent Parking Assist (IPA) was introduced in 2006, greatly easing the process of both parallel and rear-to-kerb parking. In both scenarios, the driver activates the IPA system and slowly drives forward so that the system identifies the parking space by means of ultrasonic sensors. IPA then takes control of steering input, reversing the car into the parking space with the driver simply managing the vehicle speed. Watch the video above to see the latest version of the system – Simple Intelligent Parking Assist (SIPA) – in operation in the new Prius.

IPA/SIPA is available on the new Toyota Prius, Auris and Auris Touring Sports models, and Prius+. 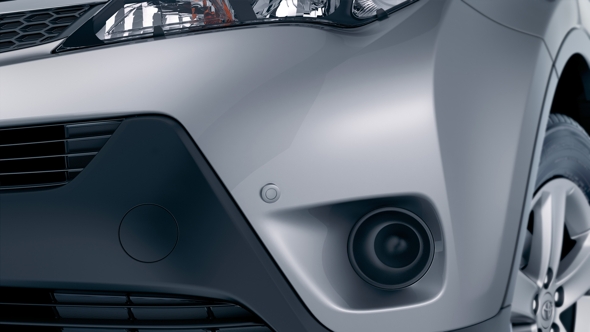 To ease parking the vehicle, Toyota equips many models with ultrasonic parking sensors that use sound waves to detect obstacles, indicating the proximity of the obstacle by means of a beeping alarm. This system can help to prevent low-speed impacts when parking, avoiding potentially costly repairs.

New Prius, Auris, RAV4 and Land Cruiser models are fitted with parking sensors as standard, with the system optionally available on the rest of the range. Dependent on specification, sensors may be fitted to the rear or both front and rear.

As well as parking sensors, Toyota also fits a rear-view camera to a number of models. The view from the camera is displayed on the in-dash display, overlaid with guidance lines that indicate distance. This system aids parking and prevents collisions with unseen objects behind the vehicle.

With the exception of GT86, all Toyota passenger vehicles are fitted with a rear-view camera (optional on Aygo).