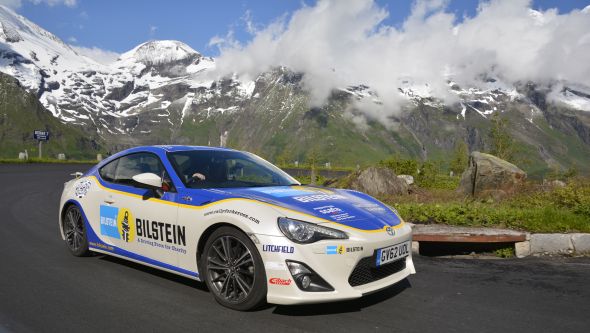 Having recently returned from the gruelling Rally for Heroes challenge that raised over £100,000 for the forces charity SSAFA, we wanted to catch up with James Mortimer to find out how well he and his Toyota GT86 coped with the eight-day and eleven-country driving marathon.

Day one of the rally began at Dunsfold Aerodrome, otherwise known as the Top Gear test track. With its bright graphics and new track-tuned suspension setup, the GT86 was the favourite choice to lead the 60-car convoy around the circuit. A 50mph speed restriction hardly tested the Toyota’s handling, so James managed to coerce the organisers into a few more spirited laps.

“Through the Hammerhead the [chassis] modifications kept the car really flat,” James reported, “and I was able to take a really tight line on all the corners. Perhaps we should challenge Top Gear to test the difference modifications make to the speed of cars around their track.”

After leaving Dunsfold, the convoy brought nearby Guildford town to a standstill as a police escort gave the drivers priority at every junction leading to the M25. A brief stop at Dover Castle allowed further photo opportunities before the group boarded the ferry to France and proceeded to Antwerp for their first overnight stay.

The second day’s drive began somewhat sedately, until the convoy arrived at the German border. “Driving attitudes immediately changed,” James recalled with a smile. “Derestricted autobahns are the best thing in the world and the entire convoy enjoyed the playtime. My GT86 performed faultlessly and reached an indicated 155mph!”

While fun was a pleasant side-effect of this charity event, the true purpose of the trip was brought back into sharp focus during a stop at Bergen-Belsen memorial, site of the infamous prison of war camp. Remembering the 70,000 people that died there between 1941 and 1945 echoed the loss of British service personnel since the beginning of the Afghanistan conflict. From there the group was treated to a military police escort to Hohne for a service in the war cemetery, before alighting in Hannover for the night.

Amazonian-style rain failed to ruin the GT86‘s predictable handling on day three’s motorway blast to the Czech border. Once again the change of scene was dramatic, leaving the group in no doubt that it had crossed into a transforming ex-Eastern bloc country. A stop-off at a Russian sports stadium outside Prague was used by some drivers to test their car’s ability to pull donuts. But it was left to James and his GT86 to demonstrate how it should be done.

Pressing on into day four, the convoy had its sights set on Salzburg and a visit to the engineering marvel and historical monument of the Eagle’s Nest. Powering up the steep incline to the top of this Bavarian mountain presented no problem for the GT86, James once again using the road’s solitary switchback and slippery, rain-soaked surface as an opportunity to highlight the car’s rear-wheel drive performance.

This was an early indication of the sort of challenging mountain passes that made up the memorable driving route for the next couple of days. The trip from Salzburg to Bolzano, Northern Italy, on day five included several enjoyable blasts up and down the Gross Glockner Pass, while day six to Zurich took in the famous Stelvio Pass.

James is still buzzing from this latter drive, commenting: “These roads really are what I live for! If you haven’t been to Switzerland in an amazing car, drop everything you’re doing. Buy a GT86 and get yourself there because this car on these roads is pure driving nirvana. It just doesn’t get any better than this!”

Just as well the latter stretch took in Lake Zurich, its glass-like surface generating a level of calm in preparation for day seven’s attack of a handful of Swiss mountain routes: Susten Pass, Gothard Pass, Furka Pass and Grimsoll Pass.

James revealed that this was one of the best driving days of his life, and a week into this pan-European event it occurred to him just how incredibly comfortable the GT86 had been so far. At no point had he felt the need to get out and stretch his back or legs; in fact, so incorrigible was the car that James frequently felt exactly the opposite.

Day eight’s slog to Luxembourg was enlivened by another police escort, this time to the British Ambassador’s residence, where all 60 cars parked outside and drew enormous attention from the locals.

The following day was an early start in order to be able to catch the midday ferry back to England. Emotions were mixed as some looked forward to getting home, while others were sad that the adventure would soon be over. But a fantastic final meal at Waltham Abbey, Essex, ensured everybody went away satisfied, safe in the knowledge that they had made it back and raised over £100,000 for the forces charity.

James concluded his report by commenting: “This was an incredible trip but what I wasn’t quite prepared for was just how good the GT86 was for the trip. It performed faultlessly, did everything that was asked of it, and didn’t use a drop of oil. I can sincerely say that Toyota has pulled an absolute blinder with this car, and I am totally in love with it.”