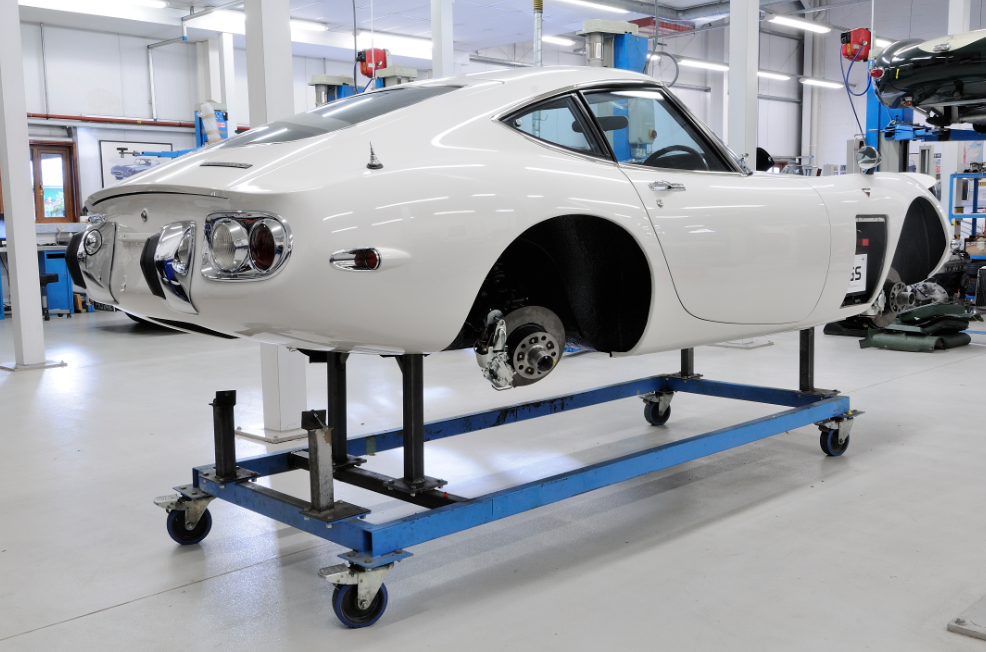 It’s the stuff that dreams are made of. This classic Toyota 2000GT is truly one of a kind. Originally registered in Mozambique, then discovered in Portugal in 2011, it was first listed for sale on eBay. The car’s the only one we can find record of with just one previous owner…

It’s now in the UK having a complete renovation. The work is being done by JD Classics, who say the model is one of the best examples in existence.

While the final price paid for the car remains a secret, a top quality classic Toyota 2000GT is worth more than £500,000, and there’s no doubt that this car will rank among the very best.

Because the car has been stored in a warm and dry climate, there is no major work required to repair the flowing bodywork, or its six cylinder engine.

However, it does require a full overhaul, and so is getting a full engine rebuild, suspension overhaul, repaint and engine bay repaint and detailing. The work will take several months, and is currently in progress – which gave us the perfect opportunity to photograph the car and its components in incredible detail. We’ve listed the project’s major milestones, below.

Crucially, the car’s condition was so good, the body has not been removed from the chassis.

Where possible the original parts are being re-used. In fact, the car was in such a good way that many of the nuts and bolts have been removed, sand-blasted, dipped, re-coated and re-used. Going through this process means the parts are strengthened as well as looking new.

There were signs that the car had been driven fairly hard in the past, so JD Classics made some parts new. There are also some nice historical touches being brought back to life, too. New, period style stickers have been made up to give it an authentic appearance.

We met Piff, the specialist engine builder who’s looking after the 2000GT’s straight six, 2000cc engine. Piff said, “the car looked great when we first got it in. It had clearly had work done to it but had not been finished terrilbly well. It was badly put back together and needed a complete engine rebuild”.

Piff got in touch with a NASCAR company over in America to have six new pistons made for the project. You can see the new piston in the above image, the shiny silver piston head on the bottom right of the image, compared with the original on the left.

The engine project will take around 250 – 300 hours to complete!

The interior is in surprisingly good condition. With the period auto-tune radio and rosewood-veneer dashboard, the interior won’t need much work and will be kept in the original style.

The work is due to take the next few months to complete and we’ve been invited back to see it begin a 200 mile road-test.