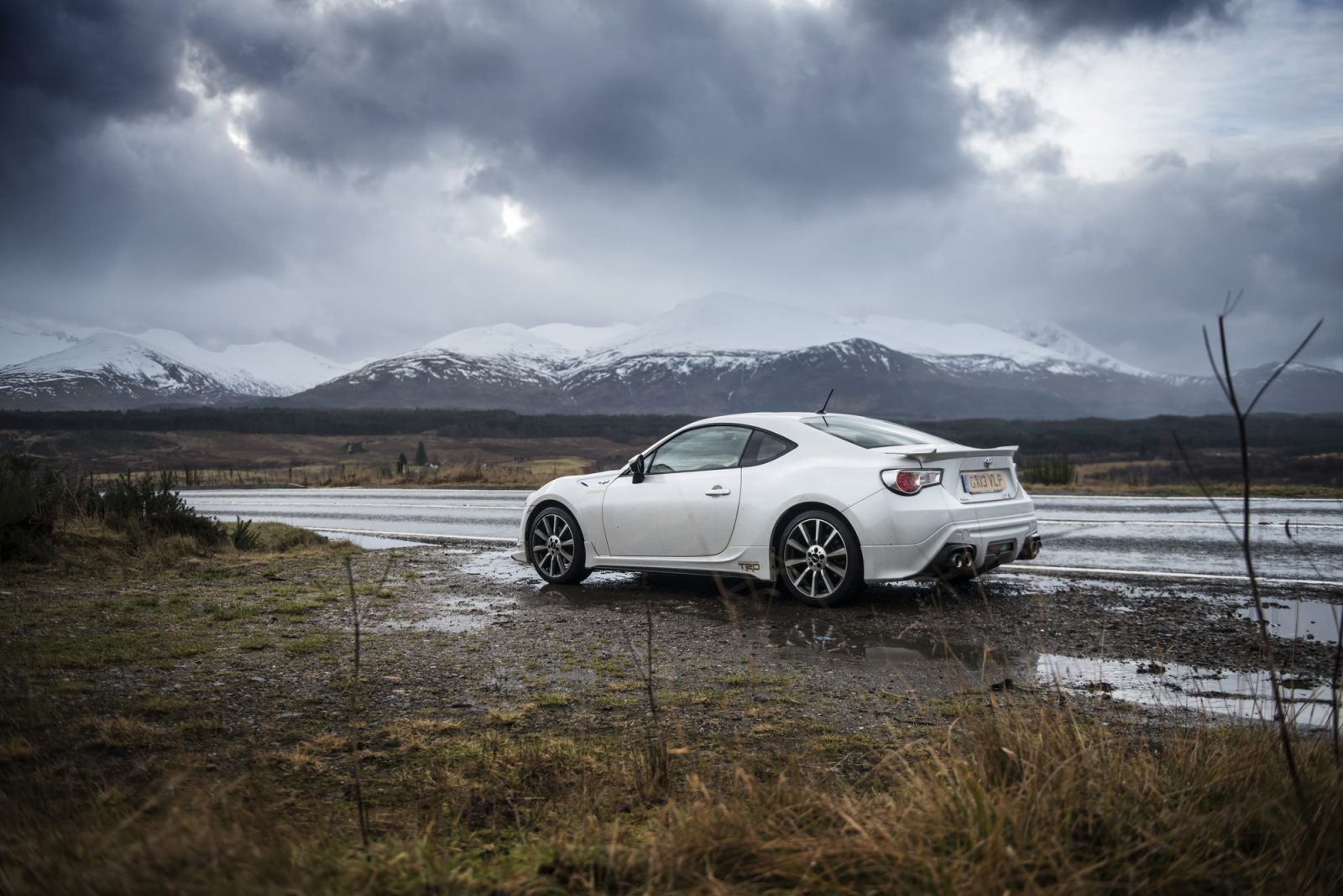 I’m George F. Williams, a freelance automotive photographer who has a passion for cars, driving and travelling and I’ve been a huge fan of the Toyota GT86 ever since I drove it when the car was launched in the UK.

Back then, I drove the car to North Wales for a photoshoot and was amazed by its raw driving experience while still retaining luxuries such as heated seats and the Touch & Go system that make it a car you can drive every day.

So in December I asked Toyota if I could borrow a GT86 on a more-long term basis. I hoped to use it as a subject with which I could practise my photography skills on, as well as finding out what it’s really like to live with. To my amazement they said yes and shortly after I was picking up this lovely GT86 TRD.

The TRD stands for Toyota Racing Development and means the car comes with an aggressive all-round bodykit, quad exhausts with a slightly louder and more raspy noise, 18-inch TRD alloy wheels with Michelin Pilot Sport 3 tyres, a more free-flowing air filter and a lovely TRD gear knob. This car also has the Toyota Touch & Go sat-nav and those heated leather seats. So a very nice spec!

No sooner had I the keys in my hand, I was planning a trip to the Highlands in Scotland to shoot the GT86 and another client’s two cars. This trip would rack up a lot of miles in a short time, so would give me a chance to learn what the car’s like on all sorts of roads.

So what was planned?
Day 1 – Drive from Reigate, Surrey, to Thirsk, Yorkshire, then on to Fort William in the Highlands. 550 miles
Day 2 – Leave the GT86 at the hotel and shoot my client’s cars
Day 3 – Take the GT86 north of Fort William and for a shoot, then heading back to Thirsk in Yorkshire. 450 miles
Day 4 – Drive from Thirsk, Yorkshire, through the Peak District to Nottingham then back home to Reigate. 400 miles

What was it like?
That was about 1400 miles in the days in a variety of weather conditions – rainging from rainy to very rainy. The first day involved a lot of motorway driving in the rain but the car was comfy and relaxing, and the it averaged a surprising 33mpg.

The real fun though was once we drove north from Glasgow, when the roads become very twisty and where I stopped caring about the fuel economy as I was having so much fun!

It was also night time when we got to those roads so I was very glad to have the fantastically bright Xenon lights to give me the best visibility on these potentially dangerous roads. The traction control also was a great help in the wet conditions, giving me the confidence to push on more than I could have done without it.

On day three we woke up to freezing temperatures but luckily no snow at ground level. After a quick breakfast we went out to load the car up with all our kit (of which it did very well, swallowing two photographers’ kit!) and after a surprisingly quick defrost of the car we headed out to take some photos in the Highlands.

The day before we had driven past a locked gate which had a slipway behind it and had thought how amazing a location it’d be if we could get access. So we made it our challenge to get access by going to all the local houses until we found who had the key.

Luckily for us the person in the first house told us a local fisherman had the key to it and where we could find him. Rather nervously, we asked him if we could access the slipway and to our surprise he just handed us the key and said “drop it back when you’re done, lovely car by the way!”. Of course the moment we got back to the slipway the heavens well and truly opened up, but we were determined and shot through the torrential weather. Dedication!

With those photos done we then took the key back and it was time to head south to find the Skyfall location for some photos (which I’d previously visited when shooting the Auris Hybrid Touring Sports last year), then back to Thirsk for some much needed sleep!

Last day was a long one, I was giving a talk to a photographic club in Nottingham area so decided to enjoy the Peak District before heading over there for the 7pm start. The bumpy roads in the Peak District really showed up how good the chassis was allowing me to push on and have fun. After a full day in the Peak District it was time for the talk. At 10pm I’m done with the talk (turns out it’s hard to talk for 2 hours straight!), and we hit the M1 heading home to Surrey.

An amazing four days despite the weather and the GT86 really made it a trip to remember.

Find out more about the Toyota GT86 at toyota.co.uk.

To find out more about George, visit his page on Facebook.