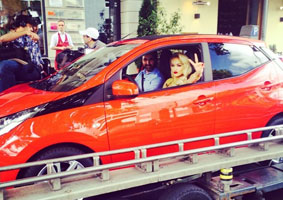 Rita Ora has taken the customisable all-new Toyota Aygo to another level with her co-ordinating lipstick and nail varnish!

Seen here in the new Aygo, the British singer-songwriter and actress managed to stop the traffic in Berlin recently during the filming of a new Toyota Aygo campaign in Germany.

Ora shot to prominence when her debut eponymous album Ora topped the Uk album charts in 2012. Singles from the album R.I.P. and How do we party, also reached number 1 in the singles chart. Since then she’s had a further two number ones.

Hoping for similar success, the all-new Toyota Aygo went on sale this week. Like Ora, the new Aygo knows how to accessorise: the x-shaped front grille, rear bumper insert, front wing garnish and alloy wheels can all be easily changed even after years of ownership.

Similarly, in the cabin the instrument panel, centre console, air vents, gear shift knob and gear lever surround can easily be customised and change to suit your personality.

Customisation packs are also key to Aygo’s character and individuality. The OUTstand pack (£395) lets owners transform the exterior with three elements – the front X, A-pillar x-tension and rear bumper insert, in a choice of three colours.

Yet more can be added with the OUTburst pack (£245), which comprises a front bumper decal, side sills and rear diffuser decal, available in red or chrome.

The cabin can be transformed with the INspire pack (£165) with surrounds for the air vents and gear shift to match any exterior colour; other interior components have a piano black finish.

Owners can also have the double-bubble roof of their Aygo covered in a contrasting coloured decal (£195), and can ramp up the street style with option five-spoke alloys (£499) in silver, glossy black, machined glossy black and white. A twin-spoke alloy (£499) can also be specified in the same finishes, plus a customised centre cap in any of six body colours.