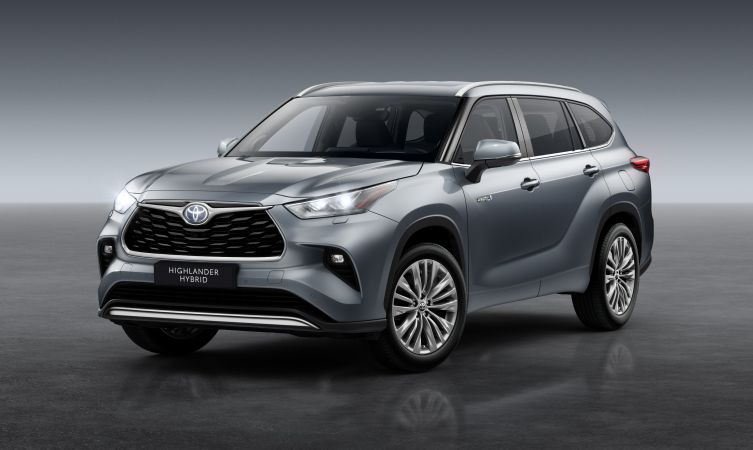 Since its debut in 2000, the Toyota Highlander has helped to create the market for vehicles that combine the versatility and capability of a large sport utility vehicle (SUV) with the practical advantages of a seven-seat passenger car.

Similar in length to a Camry, the Highlander slots into the Toyota SUV range above the RAV4, providing the additional flexibility of seven seats (or generous luggage capacity) for customers who need more space.

Launched at a time when most large SUVs were built like a pickup truck, with a body on a separate frame, the Highlander was a pioneer of car-like unibody construction. Compared with truck-based competitors, it offered improved fuel efficiency, better handling performance, lower noise levels, increased ride comfort and more stylish looks.

Highlander will arrive in the UK in 2021

Those benefits continue to be felt in the current, fourth-generation model, which will arrive in the UK in 2021 as a hybrid-only model. Hybrid powertrains have been a part of the Highlander lineup since 2005, contributing to the more than 15 million hybrid vehicles that Toyota has sold since the first Prius emerged in 1997.

Let’s take a walk through the history of the Highlander, of which more than 3.5 million have been sold worldwide in 20 years.

Toyota revealed the first Highlander at the New York Auto Show in April 2000. The new model was based on a modified Camry platform, promising car-like ride and handling, and joined the similarly sized, truck-based 4Runner in Toyota’s North American lineup. Newer generations of both models continue to be sold there today.

The Highlander was initially built in Japan, where it was sold as the Kluger – a name still used for the model in Australia, where Toyota leads the market in large SUVs. Power came from either a four-cylinder engine or a 220bhp V6; both 2WD and 4WD versions were offered.

The first Highlander Hybrid joined the range in 2005, by which time Toyota was selling more than 130,000 units each year – almost double the annual sales volume that was targeted at launch.

The second-generation Highlander arrived in 2007 with greater interior space. There was more legroom for second and third-row passengers, a higher hip point for more comfortable seating, increased shoulder width and more headroom.

A key feature was the centre-stow seat, which enabled the middle seat in the second row to be switched in and out as needed. When not in use, the seat stowed under the floor between the driver and passenger seats.

Under the skin was a new, more powerful V6 engine that contributed to improved towing capability and a fuel-saving electric power steering system.

In 2009, the first Highlander for the Chinese market came out of Toyota’s joint-venture factory with GAC in Guangzhou. Meanwhile production for other world markets – predominantly North America, but also Australia and Russia – began in Princeton, Indiana, where Highlander continues to be made. Production capacity was recently expanded thanks to a US$700 million investment.

First revealed in 2013, the third-generation Highlander was longer and wider than its predecessor, but with a lower roof line for better aerodynamics. It boasted seating for up to eight – with a one-step sliding-seat function to ease access to the rearmost seats – as well as increased cargo capacity and a new, six-speed automatic transmission.

At a time when some of its rivals were choosing more aggressive styling, the Highlander majored on style, comfort and a premium interior. US customers embraced this approach and sales doubled from 2014-18, outpacing the wider market growth by 25%.

The Muppets took a road trip in Highlander

As part of the build-up to the launch of the third-generation Highlander, a special edition was created in the summer of 2013 for a promotional tie-in with SpongeBob SquarePants. It featured a SpongeBob-yellow makeover, inside and out, and made appearances at events across the US. The fun continued in 2014, when the Muppets took a road trip in the new Highlander for a series of TV commercials. Check out Brooklyn Nine-Nine actor and former NFL star, Terry Crews in this Superbowl ad with the Muppets!

The current Highlander made its debut at the New York show in 2019. The biggest mechanical change was a switch to the GA-K platform, which allows for a lightweight and highly rigid bodyshell and a low centre of gravity, giving the SUV nimble handling and comfortable motorway cruising performance.

Yoshikazu Saeki was the Japan-based chief engineer for the project. He previously oversaw development of the current RAV4, which shares its platform with Highlander and Camry. That combination of technology and experience was to prove invaluable as Saeki’s team sought to develop what he describes as, “a kind of jumbo RAV4”.

Saeki elected not to deconstruct the image of the outgoing Highlander, as was the case with rugged new feel given to the latest RAV4, but to build on the strengths of the previous model.

“The Highlander was already in a unique position,” he expands. “The body wasn’t overly large compared with the competition and it had a very premium feel to it. When developing the new model, the job was therefore to extract more of that essence. Being able to start from a higher point than with Camry or RAV4, building on all our experiences, gave us the leeway to focus on how to turn ‘premium’ and ‘sophisticated’ into tangible things.”

The third row of seats was designed and crash-tested from scratch, however. Careful attention was also paid to the performance of the second row of seats, whose sliding range was increased by 30mm to 180mm on the new Highlander.

The Highlander Hybrid’s powertrain was further developed following its debut in the Camry Hybrid. It features a 2.5-litre Atkinson cycle petrol engine with front and rear electric motors. Total system power is 241bhp and WLTP combined cycle CO2 emissions are 146g/km with 42.8mpg fuel consumption (provisional figures). Connectivity upgrades in the fourth generation include standard Apple CarPlay, Android Auto and a 12.3in touchscreen.

The latest chapter in the history of the Highlander begins in early 2021, when the Highlander Hybrid will go on sale in the UK and Western Europe for the first time. It will extend Toyota’s hybrid SUV line-up in the region, joining the established D-segment RAV4, C-segment Toyota C-HR and the new B-segment Yaris Cross, which will also be introduced next year.

Full specifications of the Highlander for the UK market will be revealed closer to the car’s launch, but you can register to be kept updated by clicking here.