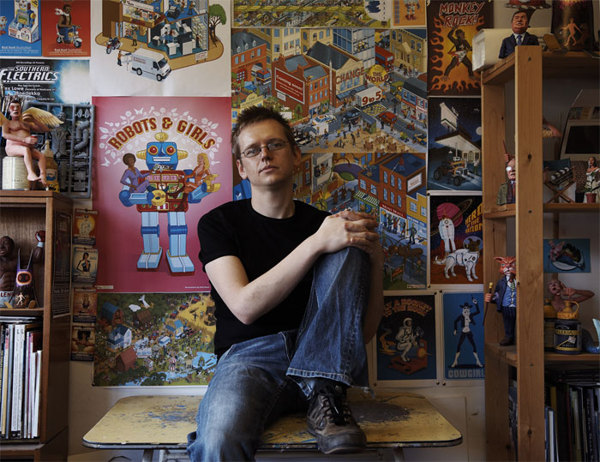 Rod Hunt is the artist behind our Aygo ‘Where’s the X?’ artworks and is also the man responsible for Top Gear’s popular ‘Where’s Stig?’ series of puzzle books.

We caught up with him to talk inspirations, his creative process, comic books and ZX Spectrum games. Oh, and the Aygo too.

1. Rod, let’s begin by talking a little bit about your beginnings. How did you start out in your profession? Where did you train and did you always have a clear idea of the style of artistry that you wanted to create?

I studied at the Cambridge School of Art for a Degree in Illustration. After art school it took me a couple of years to build my portfolio and start gaining clients before I could take the plunge and go full-time. I’ve been at it now for more than 18 years.

I never set out to work in this way, but it’s something that has evolved organically over time. I started creating isometric work at art college when I painted with fat hogs hair brushes and acrylic paint on paper. After graduating I started working towards getting commissions, mostly with magazines and newspapers.

In 2001, I reinvented my work by going completely digital, using Adobe Illustrator to do so. Maxim asked me to create an isometric lingerie shop which helped me to develop my new digital isometric language. This led to more commissions and helped me to refine my style.

In 2006, I designed the cover for the advise book Change the World 9 to 5 and this led me to take on much more complicated scenes and cityscapes.

2. Where do you draw inspiration for your work?

Comics have had a big influence over my work, especially British comic series 2000AD. Comics aside, I’m inspired by the computer games of my youth that I used to play on the ZX Spectrum. In particular, Knight Lore, Batman, Alien 8 & Head Over Heals – the isometric ones especially were favourites.

I grew up with sci-fi films like Star Wars, The Day the Earth Stood Still and Forbidden Planet, and TV shows like Flash Gordon and Star Trek. Their design aesthetic and their visions of the future have definitely stayed with me, and of course the robots were always cool! I owned tin robot toys as a kid.

The American painter Edward Hopper has also been a big influence on me due to his lighting and ability to capture a moment in time.

3. Can you describe your creative process?

Everything starts in an A5 sketchbook. Initially, I make very rough and throwaway compositions to work out the overall page layout and where the text will be placed. At this stage, I purposely draw with a Biro so that I can’t erase anything. I always give myself enough thinking and doodling time at the beginning of a project before producing a finished rough drawing. That’s where the real hard work is done and it’s the foundation of a great piece of work.

Only when I am happy with the very rough compositions and idea do I move onto creating a detailed fully finished pencil rough. I draw with a 2B pencil on heavyweight cartridge paper usually at A3, but some of my detailed map roughs I have to draw at A1. It’s at this point I work out the amount of detail in the piece.

Once the rough drawing is complete, I scan it and use it as a layout guide in Adobe Illustrator. I produce the final artwork drawing on a Wacom Cintiq screen tablet. I tend to use Adobe Illustrator as a straight drawing tool so that I can keep a hands-on feel to my work.

4. How long, on average, does a piece take to complete?

That depends on the amount of detail involved, but it can be anything from a couple of weeks to several months with very large and complicated projects.

The Aygo Where’s the X? piece took around a month from briefing to final artwork.

5. What elements of the Aygo and Toyota more generally influenced the Where’s the X? artwork?

The X from the Aygo’s grill. You might notice that ‘X’ appears as a motif in the artwork’s roads of paths, and many characters are making X shapes with their arms and legs.

Furthermore, there’s lots of references to the other parts of the Aygo Go Fun Yourself advertising campaign, such as the invisible driver.

6.What projects are you working on at the moment?

I’ve recently completed a commission as part of the promotion for a major Hollywood movie out later this year. I can’t say more right now, but it was a very fun project.