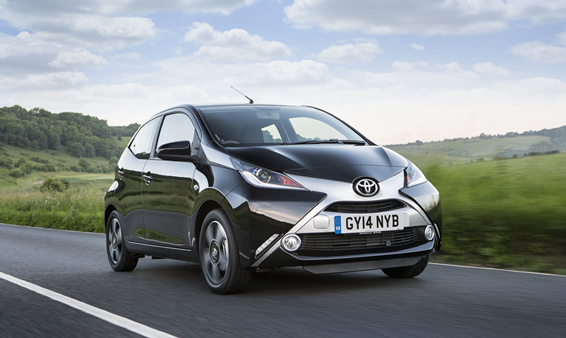 Where Toyotas are concerned, being small is no barrier to benefiting from the latest safety technology. The Aygo city car and Yaris supermini are now available with Toyota Safety Sense, providing a suite of features that can help prevent an accident happening, or reduce the severity of an impact.

Toyota Safety Sense is being rolled out across the range following its introduction earlier this year in the new Avensis and Auris. Aygo and Yaris customers can now specify the package as an option on their new car, adding to the models’ already impressive active and passive safety features.

On Aygo, Toyota Safety Sense provides a laser-controlled Pre-Collision System that warns the driver of an imminent collision with a vehicle ahead (Forward Collision Warning) and readies Pre-Crash Brake Assist to deliver emergency braking as soon as the brake pedal is pressed. Should the driver fail to take action after the warning, the system will initiate Autonomous Emergency Braking to reduce speed by about 19mph, potentially bringing the car to a stop, to prevent a collision or reduce the force of impact.

A Lane Departure Alert function is also included. This monitors lane markings on the road and helps prevent accidents and head-on collisions caused by a vehicle moving out of its lane. If the car starts to deviate from its lane without the turn indicators being used, the system alerts the driver with visual and audible warnings.

The same Toyota Safety Sense features are available for Yaris, together with Automatic High Beam. This detects both the headlights of oncoming vehicles, and the tail lights of vehicles ahead, automatically switching between high and low beams to avoid dazzling other drivers and improving the driver’s night-time vision.

Toyota Safety Sense is available now as an option on all Aygo models apart from x grade, price £375. The package for Yaris (all grades apart from Active) costs £400.