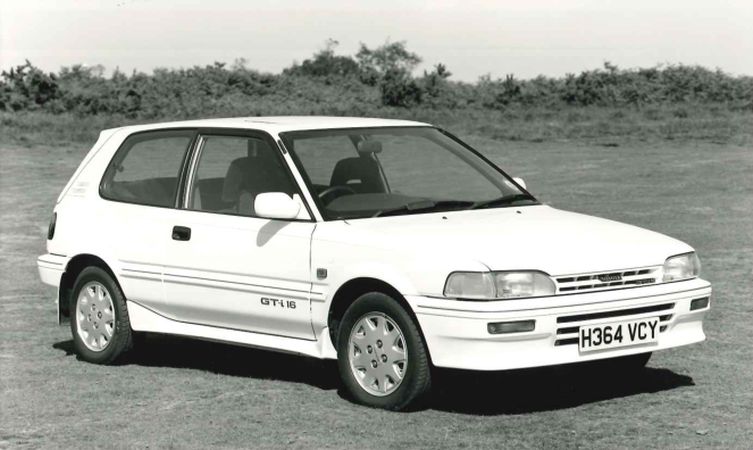 The mid-1980s saw a change in the way cars were perceived. Affluent consumers now demanded high-quality vehicles that did more than simply provide transportation; they wanted a car to satisfy their soul and enhance their lifestyle.

In order to achieve this, newly promoted development leader Akihiko Saito proposed that the next-generation Toyota Corolla not only had to offer exciting performance and ample room for all members of the family but stir delight in users on every sensory level. He wanted people to leave the car feeling that it had provided a high-quality travel experience – a Corolla that exceeded expectations more than any Corolla before it.

The new sixth-generation Corolla was launched in the domestic market in May 1987 with this transliteration: “A new tale in Japanese vehicles has begun. The birth of the all-new Corolla, a new grade Toyota saloon.”

Three mentions of the word ‘new’ within two short sentences hammered home the point that every area of the car had been redesigned, with the expressed purpose of raising the class standards for luxury and quality.

In his instructions to the development team, Saito stated: “I believe that the Corolla must erase the image of family cars of the past. Wouldn’t it be nice if the quietness and ride comfort of the Crown and the attractive appearance of the Mark II were achieved in a vehicle the size of the Corolla?”

To realise such a demanding brief and deliver that feeling of quality time Saito was searching for, the development team focussed on three principle areas: 1) Provide a line-up of characterful body styles to best fit the broad lifestyles of customers; 2) Make the vehicle fun to drive through outstanding performance; and 3) Generate a high level of aesthetic quality that appeals to the senses.

The team made more than 2,000 development proposals and cooperated with more than 100 part manufacturers to improve the overall quality of the new vehicle, even in areas that the customer would never see. In that respect, the quality built into the car went far beyond the level found in contemporary offerings within the family car class.

All body types were designed around a wide and low theme, with the straight lines of previous generations rounded off at the edges in a contemporary style. Meanwhile, the proportions – especially the visual ratio between the cabin and overall length – were relatively traditional, designed to mimic the shape of luxury vehicles by pulling the A- and C-pillars closer together. A strong horizontal shoulder line running from front to rear was also included to create the illusion of length.

In order to determine a design direction for the interior, however, the development team actively sought the advice of sales staff and visited many customers in their homes to hear opinions. It has also been reported that the designers studied the lyrics of charting Japanese songs to try and discover what would be accepted by the buying public.

From this analysis the team was guided in a direction that pursued luxury and comfort that satisfied the human senses of touch and sound. This was evident through the adoption of sumptuous velour and thick-knitted fabric materials, not to mention an unusual – and thankfully optional – maroon interior colour scheme that had apparently gained a reputation in high-grade vehicles of the time.

Ergonomics were also carefully considered during the design process, including the shape of the instruments, their layout and grouping, and the visibility and easy operation of all controls. Touch points around the instrument panel and door trims were wrapped in softer materials with pleasant textures, while meticulous attention was given to the feel of switches.

With regards to sound, levels of noise, vibration and harshness were reduced through extensive sound-proofing and the development of a digitally optimised body structure. Components within that structure were carefully profiled to be more aerodynamic and transfer the minimum amount of unwanted noise. In contrast, other sounds, such as the tone of the engine, were carefully enhanced for added sensory appeal.

At the time, this field of sound manipulation in vehicles was virtually uncharted. In fact, the first research document on the subject had only been published as recently as 1983. Using the system proposed in this document, Toyota’s development team was able to analyse and visualise sound patterns throughout the vehicle. This data was used to engineer methods of reducing the volume of unwanted sounds and enhance pleasing sounds in order to create a more comfortable interior environment.

Efforts were also made to improve ventilation performance, a vital element in maintaining cabin air quality. It was a focus on comfort and convenience that continued in the inclusion of a rake-adjustable steering wheel, height-adjustable seat belt anchors, not to mention height-adjustable front seats with additional lumbar support, more prominent side bolsters and the ability to recline almost totally flat. Numerous storage spaces were dotted throughout the cabin but the power window switches were clustered together centrally for ease of use.

The sixth-generation Corolla was well-received in every world market and remained popular throughout its lifetime. For instance, in March 1989, three years after its release, Corolla set a new monthly sales record in its home market of 44,000 units.

Part of that popularity was down to the sheer variety of models within the Corolla line. At the time of its initial release, the car was available in four body types, including a four-door saloon, two-door coupe, three-door hatchback and five-door hatchback.

Three months later, in August 1987, brand new front-wheel drive estate and van models joined the sixth-generation line-up in Japan (from 1983 to 1987 these versions were previously based on the rear-wheel drive fourth-generation model), while a practical five-door liftback model was launched for Europe.

For the first time in Corolla history, front-wheel drive was applied across the entire range. Even the new four-wheel drive saloon and estate models – another brave diversification for the Corolla range – were derived from the front-wheel drive layout. The composition of the four-wheel drive system differed with each engine and transmission specification. But essentially, cars with manual transmissions adopted a mechanical centre differential lock (below middle), while cars with automatic gearboxes used an hydraulic differential to distribute torque rearwards.

Irrespective of the precise architecture, the surprising success of these quirky four-wheel drive Corolla models is said to have kick-started the subsequent worldwide boom in recreational vehicles.

At the time of its release, a major selling point of the sixth-generation Corolla was its unparalleled engine range – comprising six petrol units and one diesel, expanding in power from 64 to 145PS.

A 1.3-litre 2E petrol engine (above) provided the entry point, followed by the newly developed 1.5-litre 5A engines with either carburettor or fuel injection. Two sporty 1.6-litre 4A units provided the next steps up the ladder, featuring either natural aspiration (below) or supercharged induction, while the solitary diesel offering was a revised 1.8-litre 1C unit carried over from the fifth-generation Corolla. Finally, a 1.5-litre 3E petrol engine was reserved exclusively for the van model.

Four of the seven Corolla engines adopted double overhead cam and four-valve-per-cylinder architecture for high performance. At the time, this was extremely unusual within the family car sector because the mechanisms were traditionally reserved for sports cars and sporty models. However, the potential of this setup for both power and efficiency could not ignored, so the team devised a new High-Mecha Twin Cam system that combined superior performance with reasonable production cost for the two 1.5-litre engines.

A number of issues had to be resolved during the development of these High-Mecha Twin Cam units, including a precise yet durable method of translating cam rotation into the opening and closing of the valves. While conventional DOHC engines used a timing belt to drive both camshafts, Toyota designed the alternative, mechanical system seen below, whereby just one camshaft was driven by a timing belt while the other was turned by a scissor gear.

Prototype engines were subjected to repeated tests lasting several hundred hours at 6,000rpm to perfect the system and deliver the optimal level of performance within the practical application range of a family car. The level of confidence that the team had in these engines was apparent from advertisements in Japan that introduced them as “Engines that go beyond the boundaries of their class.”

A new 1.6-litre version of the High-Mecha engine (above) arrived in the second half of 1987 and was reserved for four-wheel drive models, which were growing in popularity and becoming essential in snowy regions. But the final round of engine refinements was left until the second half of the model period that came online in May 1989. All A-series engines were converted to fuel injection, and a 2.0-litre 2C diesel with superb cold-start characteristics was added to the 4WD line-up to boost that variant’s popularity in cold regions.

A strut type suspension set-up similar to that of the previous generation was applied across all models. However, with revised geometry, shock absorber damping force and component parts, Toyota was able to engineer significant improvements in handling stability and ride comfort.

Integrated into the chassis of some high-grade models was a new Toyota Electronic Modulated Suspension (TEMS) system that could electronically alter the damping force between ‘soft’ and ‘hard’ based on driving conditions or driver preference.

With sporty performance a natural by-product of the sprightly engines and newly resolved handling, front disc brakes were fitted to every model and ventilated discs were installed on higher power variants. In addition, a brake booster was plumbed in to generate increased braking force with only light pedal pressure, and the brake circuits were arranged in an X-shape to ensure that loss of braking performance would be minimised if abnormalities occurred within the brake lines.

Toyota’s continuing efforts to push Corolla upmarket was the envy of the Japanese motoring industry and reached a new high with the sixth-generation model. In 1990, towards the end of its production run, this Corolla series sold an incredible 308,000 units in Japan, establishing a new record in annual sales for a vehicle brand. That record stood for 20 years, until it was broken by the third-generation Prius in 2010.