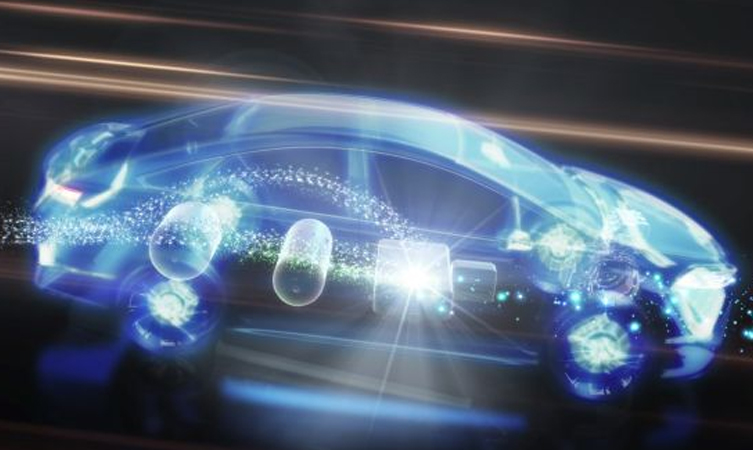 Behold the future, here today. Like it did with hybrid cars in 1997, Toyota is at the forefront of a revolution in vehicle technology. The Mirai is Toyota’s first mass-produced fuel cell vehicle, as close to the ultimate eco-car as we’ve got so far, and a vital step in solving the energy demands and emissions issues that come with traditional petrol and diesel-fuelled vehicles.

What is a fuel cell?

A fuel cell generates electricity by forcing a fuel to react with oxygen. The most commonly-used fuel today is hydrogen, but fuel cells can use almost any hydrocarbon including gas and alcohol. A constant supply of fuel and oxygen is required to sustain the reaction that produces the electricity.

The idea of fuel cells is not a new one – the first examples were designed in the mid-1800s. However, it wasn’t until NASA’s Project Apollo in the 1960s that the idea got off the ground – literally!

What’s fantastic about fuel cells is that the highly efficient process of generating electricity produces no harmful emissions, just lots of pure water making it an environmentally friendly technology. That’s great news if you’re running one inside a spacecraft, but even better here on Earth where fuel cells are a real and viable approach to achieving sustainable mobility. That’s why Toyota is striving to make fuel cell vehicles widely available as soon as possible.

In essence, fuel cell vehicles work by combining the fuel cell’s output with existing and proven hybrid battery technology like those used in the Toyota Prius. Toyota’s world-leading Hybrid Synergy Drive technology underpins its development of fuel cell technology, with the hydrogen fuel cell effectively replacing the internal combustion engine as the main power source. An easy-to-understand explanation of Hybrid Synergy Drive can be found by following this link.

With that understood, let’s explore the functions of the two primary components in a fuel cell vehicle.

Electricity is generated in a fuel cell through a chemical reaction between the hydrogen fuel and oxygen. This happens by supplying hydrogen to the anode, or negative, electrode and ambient air to the cathode, or positive electrode.

The fuel cell as a whole is made up of individual cells within a membrane electrode assembly (MEA) that are sandwiched between separators. The MEA consists of a polymer electrolyte membrane with positive and negative catalyst layers on either side. Each cell produces less than one volt of electricity, so hundreds of cells are connected in series to produce the required output voltage. As a whole, the combined body of cells is called a stack, or more commonly, the fuel cell unit.

Though a fuel cell can use almost any hydrocarbon as its fuel, hydrogen’s advantage is its high energy efficiency. As it can produce electricity without energy-wasting combustion, it’s possible to convert 83 per cent of the energy in a hydrogen molecule into electricity – that’s more than double the energy efficiency of a petrol engine.

The hydrogen fuel is stored in two high-pressure (70MPa/700bar) tanks like the one shown below. It uses an innermost layer made of a special polyamide resin layer that is incredibly strong and superbly resistant to hydrogen permeation. This latter quality is especially important as hydrogen molecules are the smallest known to science and are particularly good at escaping through lesser materials!

Toyota has used other materials and techniques to enable it to increase tank capacity and reduce weight – historically, most fuel cell vehicles have needed four separate tanks to provide a useable range. These include the winding angle, tension, volume and wall thickness of the carbon fibre Toyota uses in the outer shell.

The following step-by-step explanation describes how a fuel cell generates the electricity used to power the vehicle:

1. Hydrogen is supplied to the anode (negative) side of the fuel cell
2. Hydrogen molecules activated by the anode catalyst release electrons
3. The electrons travel from the anode to the cathode (positive) side of the fuel cell, creating an electrical current
4. The hydrogen molecules that released the electrons become hydrogen ions and move through the polymer electrolyte membrane to the cathode side
5. Hydrogen ions bond with ambient oxygen and electrons on the cathode catalyst to form water
6. Electricity produced by the fuel cell is directed to an electric motor to deliver drive to the vehicle
7. Regenerated energy is stored in a secondary battery that supplements power from the fuel cell by providing auxiliary power to the electric motor

Toyota began researching fuel cell technology in 1992, with its development culminating in the practical FCV Concept that debuted at the 2013 Tokyo Motor Show. Producing no emissions other than water by converting hydrogen into electricity, the FCV Concept promised a range of over 300 miles. It could also produce enough power to provide a Japanese home with over a week’s worth of electricity.

The FCV Concept became a production reality with the launch of the Toyota Mirai in November 2014, and the Mirai is set to go on sale in the UK in September 2015 to selected fleet partners who can utilise the existing hydrogen refuelling infrastructure. Wider availability will depend on the Government’s £11m infrastructure investment program.

More information on the revolutionary Toyota Mirai and the technology behind it can be found at the following links: