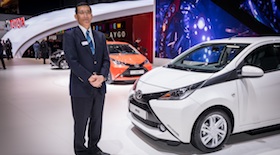 ‘Fun’ is the word that’s buzzing across everyone’s lips at the 2014 Geneva Motor Show.

This year, Europe’s biggest, brightest annual automotive bazaar has been taken over by a bevy of tiny city cars with big personalities – and leading the front of the pack is the new Toyota AYGO.

Sat across from me in a small room behind the Toyota stand, the loud beat of the music blaring from the speakers still faintly audible, the man responsible for the car that is causing such a stir has a wide smile plastered on his face.

“I wanted to put everything I could onto the car now ready for the launch. There was nothing I wanted to hold back or add in later.” David Terai tells me.

The Chief Product Engineer for the new AYGO has been working hard on this car since 2008 – and he’s more than a little excited that it’s finally here.

“The previous generation was very successful so creating a new one was a big challenge for me… a lot of pressure was there!” Toyota knew that by the time it was ready to launch the new AYGO there would a lot more rivals on the market.

In fact there are double the number of city cars available now than there were in 2005 when the original car went on sales, so Terai and his team knew that they would need to make their car stand out.

“The first thing I thought was not follow the European way, but do something different, a little more Japanese, a little more Toyota,” Terai tells us.

“That is how the dramatic new face of the AYGO started life. There are so many different choices in fact that the stand is a riot of different colours – and opting for red and black or orange and white really transforms the character of the car.”

David explains more about the development process behind AYGO in this video.

The bold ‘X’ graphic in the nose contrasts with the bodywork, running up the wings and matching up with the wide rear bumper. Customers will be able to choose a wide variety of colours, different wheel designs and two interior and exterior packs – and if you get bored then every single contrasting panel can be swapped for a new set in less than half an hour at your local dealer.

The changes didn’t stop there though – and Terai is keen to point out that a car need more than just good looks: “My goal was that we needed a striking design, but if you only have good design and average performance then no one will buy the car. I wanted to improve the ride and handling, and the refinement too.”

However Terai was also eager not to make the AYGO feel too grown up and sensible. “We wanted to try and keep the three-cylinder engine note, we call it the fun sound and it’s a definite part of the character,” he tells me.

“I didn’t spend all my time trying to pack it with sound deadening.  It’s not just a town car though, so if I see more AYGOs on the motorway now then I succeeded!” he jokes.

So how do you make a car more fun to drive and more secure at the same time? Well Terai has made a lot of changes underneath. The AYGO platform is carried over from before, but it should feel very different out on the road.

“I wanted to have more precise steering, so I changed the gear ratio, but if you have that precise steering then the car moves around a lot more so it needs to be more stable. To achieve that, the rear stabilizer is thicker we replaced the rear axle and the body is now 20 per cent stiffer than before – in fact it has the same stiffness as the VW up! when we tested it.” Terai certainly sounds happy with the results.

He even tells me that the boot can still fit a German beer case – an important fact for any prospective buyer keen to take their AYGO on a trip to a music festival or camping trip. There will only be one engine on offer at launch, a 1.0-litre petrol with a distinctive three-cylinder hum – and when I ask about the possibility of more different versions of the AYGO later on, Terai is tight lipped.

“It’s my job to come up with those ideas for the future – but I can’t talk about it!”

Find out more about AYGO in this post – or register your interest at Toyota.co.uk.