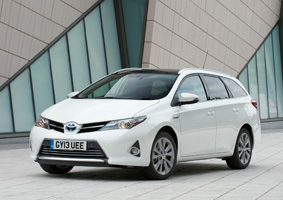 The British-built Auris has helped propel Toyota to an 8.6 per cent year-on-year increase in European sales in the first half of 2014. Total Toyota sales for the period were 427,216 vehicles.

Built exclusively at Toyota Manufacturing UK’s Burnaston plant in Derbyshire and with hybrid engines produced at Deeside in North Wales, the Auris hatchback and Touring Sports wagon amassed 73,718 sales – 18.4 per cent more than in the same period last year. Within that figure, hybrid proved by far the most popular powertrain option, notably for Touring Sports with best-yet monthly figures of 18,379 units in June – one in four of all Auris sales.

Taking all hybrid Toyota models in to account – Auris, Yaris, Prius and Camry versions – the first six months saw a 17 per cent rise in sales to 75,623; Yaris Hybrid similarly posted a 17 per cent increase in sales volume, maintaining its unique position as the only hybrid in the supermini segment. Its performance is set to be strengthened with the launch of the new 2014 Yaris in August, with CO2 emissions brought down to a new low of just 75g/km.

Tony Walker, TMUK Deputy Managing Director, said: “The growing success of Auris, and in particular Auris Hybrid, demonstrates how TMUK’s commitment to quality is helping deliver excellent results for Toyota. Cars and engines built here in Britain are proving a success right across Europe, which is great for Toyota and for British manufacturing.”