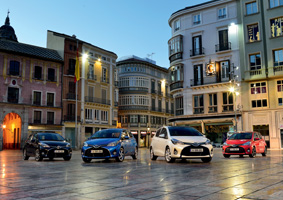 The launch of the new 2014 Yaris is a major milestone in the history of Toyota in Europe. It is the first time the Brussels-based product planning and research and development departments, and the European design studio near Nice have worked together to deliver new designs and changes to a vehicle platform that will be adopted for other Toyota models around the world.

In the past, project management for model changes on the scale as those seen in the Yaris was always done in Japan. While Toyota Europe provided input and given specific tasks to carry out, the schedule was set by Toyota in Japan and they made the decisions. In the case of the 2014 Yaris, this has changed.

“We drafted a blueprint for Yaris to be as competitive as possible,” he said. “For this, we listened to customers and dealers, benchmarked the strongest of our competitors and then added our view on how we see the segment evolving in the coming years.

“Afterwards, the results were adapted to fit other markets such as the US and Japan, but the fact that we began with the most demanding region for this type of vehicle gave us an excellent starting point.”

“We were truly in the driver’s seat,” he said. “Toyota’s A and B-segment chief engineer was key to the process. He trusted us to select the right priorities and more than once had to defend our choices with top management, especially since we were really pushing the boundaries, making this change significantly more than a regular facelift.

“The interior design changes and the platform upgrade in particular go far beyond what is expected from a mid-life upgrade. Hence, in some respects this is almost a new generation model.”

What was the biggest step change for Toyota Europe?

“One of the biggest game-changers was perhaps the fact that body-design engineering was in Europe,” he said. “This is the division that links design and engineering. They take the stylist’s vision and turn it into something that can actually be produced according to Toyota’s strict quality and performance requirements.

Often this requires compromise, but in this project, since the body-designers were also based in our Brussels office, it was easy to discuss things with them. They know the market as well as we do and they have a good understanding of what is important to the European customer. This allowed us to challenge our traditional way of working and find solutions which can meet these technical requirements with the least compromise in styling. Without the benefit of this, there are several elements in the car’s interior and exterior design that would have not made it through to production.”

The 2014 Toyota Yaris is available to order now, with deliveries starting next month.