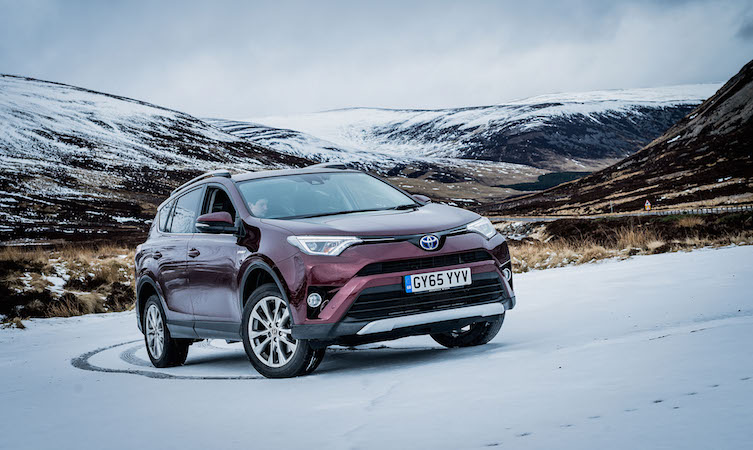 The new RAV4 Hybrid offers something completely different: the benefits of 4×4 capability and control, combined with the exceptional efficiency of Toyota Hybrid drive.

The RAV4 Hybrid is available with E-Four – a new Toyota all-wheel drive system for hybrid models. E-Four all-wheel drive delivers great traction in tricky situations, as well as giving improved handling and a sporty feel in normal driving – so you can be confident you’ll be able to get exactly where you need to safely and have fun on the way.

Learn more: How does the traditional all-wheel drive system of the fourth-generation RAV4 work?

This allows torque (pulling power) to be distributed between the four wheels, improving grip and stability.

This clever system not only delivers improved handling and safety benefits, but also better fuel economy than a traditional four-wheel drive system as there is no need for a weighty central prop shaft to send power to the rear.

How does Toyota E-Four work?

In normal driving, all of the car’s power is sent through the front wheels as this is the most fuel-efficient use of energy – but the RAV4’s electronic control unit (ECU) constantly detects and analyses information such as vehicle speed, accelerator angle and wheel speed to calculate the optimum spread of torque. When it detects a need for more torque at the rear (for instance if the front wheels are slipping), it uses the rear motor to send power to the rear wheels and deliver extra shove.

In total, up to 60% of the car’s total power can be sent to the rear axle. So when you’re pulling away, going up a hill or driving on a low-traction surface such as wet grass, having more power sent to the rear wheels makes it easier to set off in a controlled way.

The E-Four system also ensures that wheel slip is suppressed, giving you confidence even when negotiating slippery or icy roads.

On top of all that, the system can deliver more power to the rear to deliver a sportier drive – giving a smoother, more direct cornering feel. 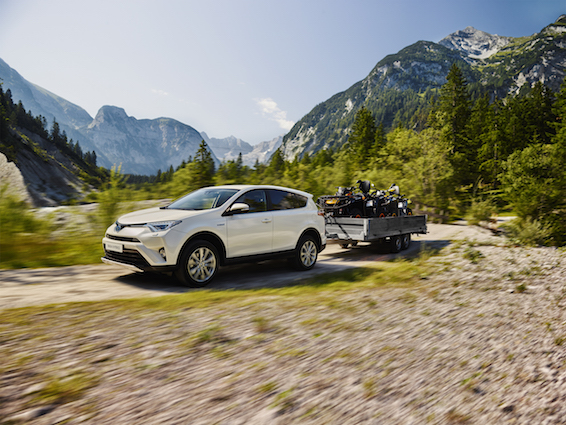 Can you tow with a RAV4 Hybrid?

Yes, you can tow with a RAV4 Hybrid. In fact, towing capacity more than doubles if you opt for an E-Four all-wheel drive model. A RAV4 Hybrid with front-wheel drive can tow up to 800kg, while a model with E-Four AWD can tow 1,650kg.

E-Four is fitted as standard to Toyota RAV4 Hybrid Icon and Excel models, and helps the car achieve low CO2 emissions of 118g/km and a Band C VED rating. Combined cycle fuel economy according to standard UK testing is 55.4mpg.

Find out more about the RAV4 Hybrid at toyota.co.uk.

Read our other posts on RAV4 here.