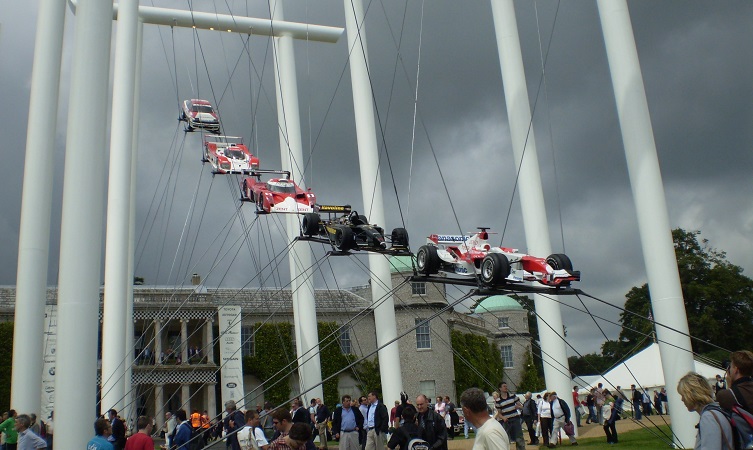 Rod Millen’s first appearance at the Goodwood Festival of Speed in 2002 set a phenomenally high bar in terms of performance. Behind the wheel of a Toyota Celica specially prepared for the Pikes Peak International Hill Climb in the Rocky Mountains, the Kiwi not only set the fastest time of the year (47.40 seconds) but brought a new kind of turbocharged spectacle to the event. Even the Duke of Richmond, event founder, counts this performance as one of the all-time Goodwood Festival of Speed highlights.

Rod Millen’s awesome follow-up to the Celica (see above) was the Tacoma pick-up, once again originally prepared to tackle Pikes Peak International Hill Climb. In its regular visits to the Festival of Speed it has been among the fastest and most dramatic machines up the hill. The best of these times was set in 2003, when its 45.08sec pass put it in Goodwood’s all-time top ten fastest.

There is a rule that contemporary Formula One cars are not allowed to set official timed runs on the 1.16-mile hill climb. According to our unofficial stopwatches, however, Allan McNish’s blast in the Toyota TF102 in 2002 got pretty close to the official record of 41.60sec. Just listen to that V10 engine sing… without doubt one of the Goodwood Festival of Speed highlights.

The Battle of the Toyota Celicas

In 2011 two highly charged four-wheel-drive Celica models using similar underpinnings – Johnny Milner’s sixth-generation and Adrian Smith’s seventh-generation – battled for the fastest time up the hill. Smith’s time of 50.05sec was significantly faster than the competition (see video above)… until Milner’s orange car eclipsed it with a ballistic 48.07sec run that put everybody bar the single-seater drivers in the shade.

For the 2007 Festival of Speed, renowned sculptor Gerry Judah created the central display in honour of Toyota’s 75th anniversary and our 50th anniversary of involvement in international motorsport. The sculpture on the lawn outside of Goodwood House was inspired by traditional Japanese torii gates. Upon them hung five key models from various motorsport disciplines: a TS010 and GT-One Le Mans cars, a Toyota-powered Indycar, the TF107 Formula 1 car and a Celica GT-Four rally machine.

US racing driver Mike Skinner (aka ‘The American’ in the first series of Amazon’s The Grand Tour) has become one of the Goodwood Festival of Speeds highlights himself, after many appearances at the famous event. He showed an incredible, winning commitment during the 2016 shoot-out. Firing up the narrow hill climb at speeds of up to 132mph, the NASCAR Tundra pick-up was slithering around beyond the limits of adhesion. Spectacular!

Leaving the crowds in no doubt about how fast the 2014 World Endurance Championship winning Toyota TS040 Hybrid race car was, British driver Anthony Davidson put on a blisteringly quick – but officially untimed – display during the 2015 event. However, we reckon he completed the course somewhere in the low 40s. See what you think…

In 2019 Formula Drift star Ryan Tuerck put on one of the most spectacular performances ever seen at Goodwood when he careered his Ferrari-engined Toyota GT4586 up the hill climb in a committed, rubber vaporising display of precision driving. In particular, check out the eruption of straw as he grazes the bales at 55 seconds.

We’d love to know what your favourite Toyota moments have been. Leave us a comment below!