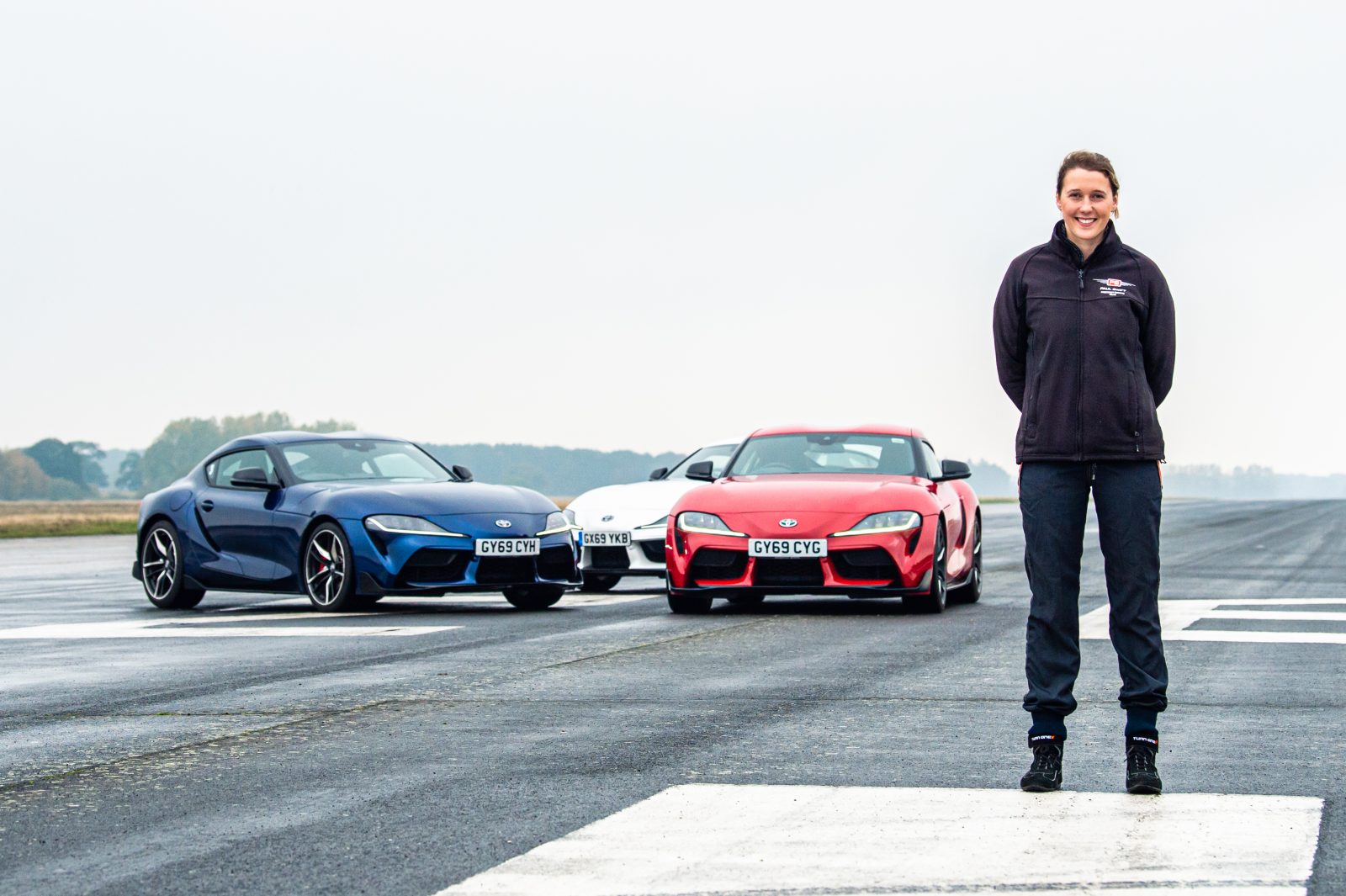 When Gina Walker isn’t working as a mechanic full-time in her father’s garage, she competes in motorsport and performs precision driving displays as part of Paul Swift’s team.

Walker was born into a motorsport-mad family – her mother is 1990 FIA Ladies World Rally Champion Louise Aitken-Walker – and has been around cars her entire life.

It’s fair to say, however, that the Road Arrows displays in the GR Supra threw up a few interesting challenges that even she hadn’t experienced before. We caught up with her after the event to find out more.

TGB Blog: How do you go about planning stunts like this?

Gina Walker: “It’s about thinking strategically. We had a practice day with Paul [Swift – stunt choreographer] where we went through each of the manoeuvres, so we had an idea what it was supposed to look like and what he was kind of wanting from it. Then we worked on the fine-tuning.

Read more How we made the GR Supras trail colourful smoke

“Walking through the manoeuvres before we’d even tried them in a car was really important because then we knew exactly where we were supposed to be and what we were supposed to be doing. When we got into the cars, it was a whole different ball game. You’ve got so many other things to think about, so if you’ve got the manoeuvre clear in your mind, it’s one less thing to consider.”

TGB: How much of a challenge was the precision driving?

Gina Walker: “We had to work very closely with the car next to us. We had to be really aware of our surroundings, keeping the distance and trying to keep everything as precise as possible to try to make the shoot look as spectacular as we could.

“You’re trying to think of everything and get it perfect – your speed, your distance to the next car – and then all of a sudden the pyros would go off and then everything’s blind. You didn’t know where the person is next to you due to all the smoke flooding down the sides of the car, and then when the instruction to ‘split’ was called, you had to shoot off in the assigned direction and trust that everything’s going work as it was planned.”

TGB: Were you nervous during any of the manoeuvres?

Gina Walker: “If you’re not nervous then that’s when mistakes happen and you get a bit complacent, so a little bit of nerves keep you on edge. It was a little scary when all the pyros went off and we were heading into the smoke hoping there was nothing in front of us…”

Read more Behind the scenes of GR Supra Road Arrows

TGB: How do you find working with Paul Swift?

Gina Walker: “Paul is brilliant. He keeps us all calm, and the camaraderie between us all is just brilliant. It brings out the best in us and makes us feel comfortable. When you feel relaxed like that you can just go out and do your job to the best of your ability, because there’s no worry with anything.”

TGB: What were your impressions of GR Supra?

Gina Walker: “I drove a silver GR Supra and I really gelled with it. I wanted to take it home, but I was told I’m wasn’t allowed! It’s really fun; I played around with the Vehicle Stability Control, turning that off, putting the car in Sport mode and using the paddle-shifters. It’s just got all the good stuff. It’s quite smooth, so it was nice to have a little play about, get it sliding and feel confident that it was just going to stay there.”

TGB: How important was it to keep in contact with your fellow drivers?

Gina Walker: “We have the radios in the car and Paul relays instructions to us. We all help each other out with information such as what gear we’re in, what we’re doing, when we’re setting off and setting the exact speed.

“During one manoeuvre Paul shouted over the radio ‘Red One’ to address the main driver in the middle car, I thought that was so cool. I was thinking, ‘Oh my god, it actually is like we are the Red Arrows!’”

TGB: Have you enjoyed this experience?

Gina Walker: “I loved every second of this: a big airfield and a massively powerful car – it was a dream. I really liked the arrow manoeuvre we performed at the end because I was in the GR Supra right at the back, so I could see the whole thing. When the pyro went off it was just amazing and then there was a sunset… to me it looked perfect.”

To learn more about the Toyota GR Supra, or to configure your ideal model, click here.