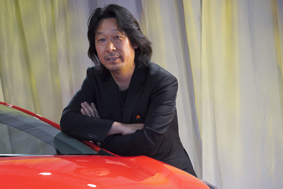 The all-new Toyota Aygo was the big hit among the small cars unveiled at the Geneva motor show. With its radical new X-themed design, vast range of customisation opportunities, clever packaging and ground-breaking use of advanced on-board multimedia systems, it demonstrated how Toyota has gone beyond the qualities that made the original model such a long-lasting success to transform its presence in the city car/A-segment.

The team that delivered new Aygo had clear ambitions about what they wanted to achieve in the new car, one which stands a pathfinder for a new design direction that’s all part of Toyota’s missions to create ”ever better cars” that are fun to own and great to drive. Who better to hear from to understand new Aygo than the people who created it.

Product concept
Chief Engineer David Terai says new Aygo had to be much more than a practical run-about: “My main driver was to create a car that people would fall in love with.

“Traditionally the appeal of cars in the A-segment has come from their practicality and compactness, and their price tag. But all too often they lack desirability, the elements that make you truly want a car. Design is treated as secondary and there aren’t many equipment options to choose from.”

In taking this approach, Terai acknowledges that you won’t be able to please everyone.

“If you aim for an emotional link between customer and design, you have to accept that tastes differ. And in a crowded marketplace, it’s better to have a design that half the people absolutely love, rather than one that nobody objects to. That’s how new Aygo stands out,” he explains.

“Every time you look at your new car parked out front, you want to be reassured about the choice you’ve made. That’s why we didn’t accept any compromise when it came to styling.”

There’s no escaping the impact of new Aygo’s appearance, a look that’s been influenced by the bold shapes and forms of hip Japanese youth culture – tagged “J-Playful” by Toyota. But for all its compact size and appealing look, it’s no less robust – a balance that presented a big challenge to the design team.

“Designing a compact car like this isn’t easy. You want it to be loveable, but at the same time it needs to have proper street credibility. So it should look solid and strong, and have real road presence,” says Nakamura-san, adding that this called for some “tough choices”.

“For example, for the headlights to be narrow enough to sit within the X-graphic, they had to incorporate projector technology. This is exceptional in the A-segment, which tends to favour the cheaper, but larger reflector type. This is a good example of how we rejected compromise to end up with a better car.”

Where the interior’s concerned, there was a major focus on ergonomics, as David Terai explains: “We were mindful of the younger type of customer we see in the segment, so we improved the driving position by reducing the steering angle and lowering the front seat hip pint. We also equipped the driver’s seat with height adjustment, so finding your preferred position at the wheel should be easy.”

Customisation
Such is the wealth of customisation options for new Aygo, you’re unlikely to see two cars that are exactly same. Providing this degree of choice was another key element in defining new Aygo.

David Terai explains: “This was particularly important to me, firstly because customers have become used to a wide choice of colour and execution in many different things they buy and it’s time for the auto industry to catch up.

“Secondly, the ability to create very much your own Aygo is key to achieving the quality of desirability that I wanted for the car. Knowing that your car is somehow unique will make it all the more special to you.”

Engine and gearboxes
New Aygo retains a three-cylinder, 1.0-litre engine that in its past form has earned a string of international awards for its efficient performance. Now that unit, renowned also for its appealing character and distinctive rhythm, has been further developed to achieve even better fuel economy and (UK road tax/VED exempt) sub-100g/km CO2 emissions, but without resorting to technology that pushes up the price.

“We wanted to improve performance as well as economy – in the A-segment running costs are paramount, customers don’t want to spend a fortune on fuel bills,” says Terai-san.

“But at the same time, we didn’t want to resort to costly technology to reduce consumption, as this would have driven the vehicle price up too much. So our challenge was to come up with relatively simple yet clever ways to achieve our targets.”

Cue a long list of improvements to the 998cc engine, ranging from an increase in compression ratio, to a improvements in combustion chamber design and comprehensive measures to reduce friction and weight.

UK market
Full details of the new Aygo UK range and prices will be announced nearer the on-sale date this summer. More details about the new model can be found on Toyota.co.uk.