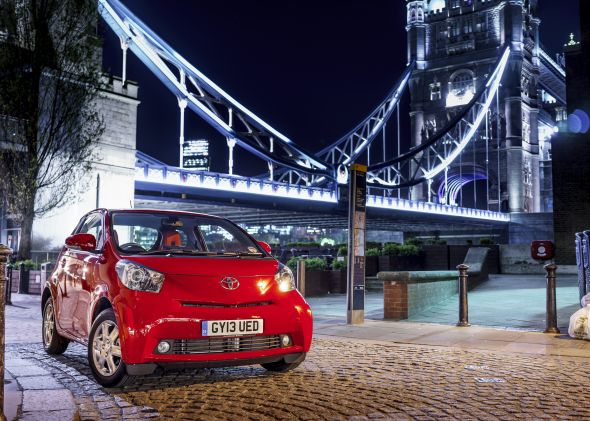 Launched as the world’s smallest four-seater car, the Toyota iQ marked a breakthrough in urban transportation, revolutionising small car design through interlinked engineering solutions. This interlinking process got us thinking about other ways in which we have connected our surroundings. We were inspired to conduct a Toyota iQ review while criss-crossing the Thames on some of London’s most iconic bridges.

The first stop-off on our westward route through the capital was Tower Bridge, arguably the most iconic and recognisable of all London bridges. Stood on two immense piers containing over 70,000 tons of concrete, the bridge appears to be a traditional castle-like structure of solid Cornish granite and Portland stone. But in actual fact, this is a facade that covers the primary construction material underneath – 11,000 tons of steel framework.

Similar strength can be seen in the iQ’s exterior design. Unmistakably Japanese in origin, Toyota speaks of the car’s ‘J-Factor’; in other words, its balance of Japanese originality with global appeal. Stood on wheels placed at the extremity of each corner, the iQ projects a strong stance from the ground up, ensuring that every panel contributes to the overall design. Mathematical formulae were used to emulate organic forms throughout the body, while strong vertical lines define the rear of the car.

Read a full history of the Toyota iQ here

More than just a pretty face, however, iQ’s attractive design conceals one of the strongest and most robust safety structures in the city car class. Created with the expressed aim of achieving class-leading safety in full-frontal, offset, side and rear collisions, iQ delivered on the promise by setting a maximum five-star rating in Euro NCAP crash testing.

Our Toyota iQ review moved upstream towards Westminster Bridge. It’s not so much the seven-arch river crossing that attracts interest but the impressive backdrop along the north bank. Look closely, however, and the gothic detailing evident in the Palace of Westminster can also be found in the wrought iron construction of the bridge, while the predominantly green colour scheme is shared with the leather seats inside the House of Commons.

Similar connections can be drawn with the iQ. Hidden within the interior are seven different types of airbags, all of which were developed specifically for the car’s miniaturised proportions. They include a world-first rear window curtain shield airbag, side airbags that are larger than usual, and the remaining six (there are nine airbags in total) that are smaller than normal.

Seven paint finishes are available, and this Chilli Red example also benefits from a splash of coordinated colour inside the car. Specified from new as part of Toyota’s customisation programme, super-soft red Nappa leather upholstery with platinum fillets and stitching adds an extra air of luxury and tactility to the already well-appointed iQ interior.

Our third destination on our Toyota iQ review tour was one of the quietest but most striking of London’s bridges: Albert Bridge. This crossing is one of only two Thames road bridges in central London never to have been replaced, but it is not its authenticity that has made it a favourite backdrop among Chelsea film-makers. The bridge becomes truly spectacular at night when it is illuminated by the dazzling display of 4,000 jewel-like lights. Yet only during the bridge’s extensive refurbishment in 2010-2011 were these lights switched for energy-saving LEDs.

By the time of the iQ’s launch in Japan in November 2008, Toyota had already adopted a number of measures to save energy and improve fuel efficiency in this innovative new vehicle. LED bulbs were just one of these strategies, notably in the lighting module above the front seats. This pivoting module does much to lend the iQ its calm and elegant interior ambience, while providing one-and-a-half times more light than a conventional unit.

Both Albert Bridge and Hammersmith Bridge, our next stop-off, are ill-suited to the weight and volume of modern-day traffic. Strict limits now stop heavier vehicles from crossing, enforced with narrow width restrictions that actively discourage the ‘Chelsea tractors’ frequently seen in these parts of West London. There are no such restrictions for drivers of the diminutive Toyota iQ, which tips the scales from as little as 845kg and has an overall width of 1,680mm.

Hammersmith Bridge was the first suspension bridge built over the Thames; and while the current bridge is a later design, it still rests on the same pier foundations as the original structure.

Something similar could be said about the iQ’s suspension. It uses the tried and tested pairing of MacPherson strut front and torsion beam rear suspension for optimal packaging but the way this particular setup has been engineered in relation to the body is innovative. As well as fine-tuning the geometry to give the car incredible stability despite its short wheelbase, the front suspension especially has become one of the key countermeasures in overcoming the effects of an impact. Essentially, the suspension members and connections are designed to disperse impact energy into and around the body to protect the car’s occupants.

Of all London bridges, it is perhaps Richmond Bridge, the oldest surviving crossing in Greater London, that has been the most admired, and this is where our Toyota iQ review came to a conclusion. Soon after its unveiling, a 1779 edition of The London Magazine proclaimed Richmond Bridge as “one of the richest landscapes nature and art ever produced by their joint efforts”. Many leading artists of the time, including Constable and Turner, immortalised its five elliptical arches as the subject of their paintings.

The Toyota iQ has also been widely applauded for its design. Soon after its domestic launch it was awarded Japanese Car of the Year for 2008, a landslide result that represented a score more than double that of the car in second position. That same year iQ took centre stage as part of a ground-breaking partnership with the Royal College of Art during the London Design Festival. It was used to exemplify the theme of Intelligent Urban Living and displayed as inspiration for the next generation of designers to think about the radical designs that will change our experience of living in cities.

These events were a fitting reward for Toyota’s development team, which set themselves the target of creating a new kakushin (revolutionary change, or radical innovation) within the city car genre. Even to this day, we believe that no other vehicle represents a better overall solution to the issues of space- and fuel-efficient urban transport than the Toyota iQ.

The details of this article were correct at the time of publication in 2014.