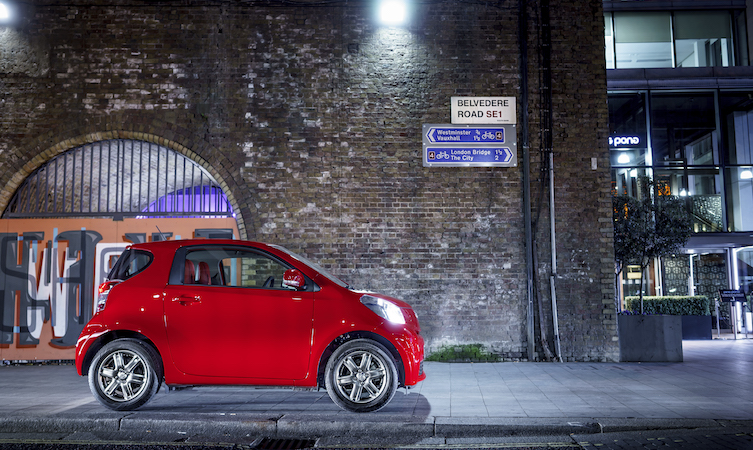 Toyota has never been shy of producing innovative cars, but few have turned heads – or headlines – like the Toyota iQ. This groundbreaking compact city car, less than three metres long, was launched in 2008 to a background of accelerating environmental awareness and the growing problems of urban pollution and congestion. It was these issues, which today form the bedrock of any discussion about the future of motoring, that absolutely shaped the mould-breaking iQ.

The Toyota iQ was created from the ground up and the car’s gestation period was lengthy – almost five years from the initial proposition in 2003 through to the start of production. The design team, led by Chief Engineer Hiroiki Nakajima, was tasked with rethinking the small car to create an ultra-compact and environmentally friendly four-seater that was at home in crowded cities and yet which offered stylish looks, appealing quality and a refined drive. It was a lot to fit into a sub-A-segment model less than three metres long overall. 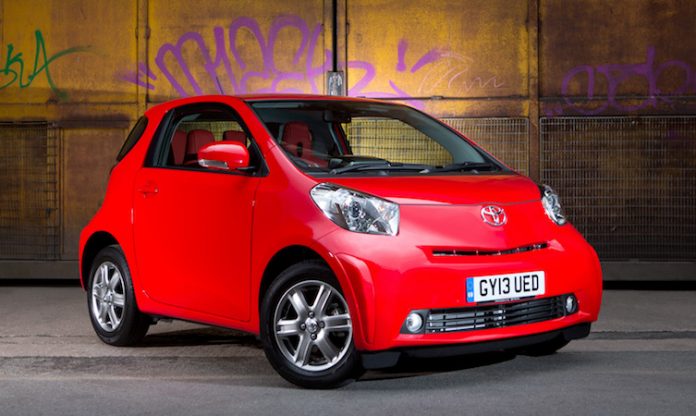 An early development programme focused on taking a revolutionary approach to packaging and miniaturisation. The Japanese design philosophy of ‘kaizen’ – meaning continuous incremental improvement – simply didn’t apply here. Instead, ‘kakushin’ – for revolutionary change or radical innovation – became the driving force behind the project. Every detail, every subset of components had to be rethought, not just in their design but also in how they related to each other and how they could be packaged within the iQ’s footprint. 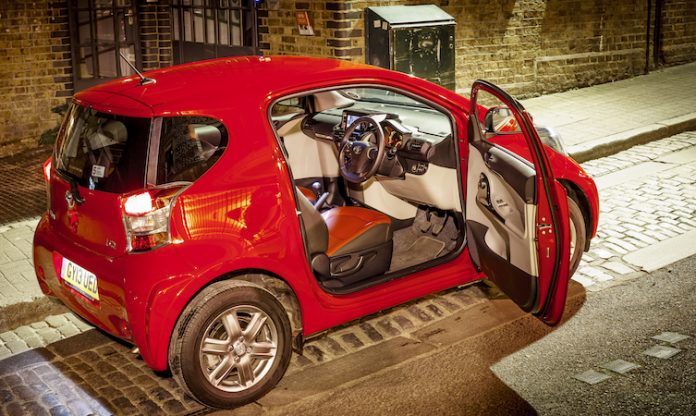 At the same time, designers both in Japan and at Toyota’s ED2 Design Centre in France concentrated on shaping what would become the iQ’s striking exterior styling. Then, after that initial two-year development period, Toyota’s senior management gave the project the go-ahead for production and the iQ concept was revealed at the 2007 Frankfurt Motor Show.

Throughout its inception, development and production, the iQ’s environmental message was clear: that the reduction of fuel consumption, CO2 emissions and pollution was crucial if cars were to continue having a place in the modern world. The iQ was a bold statement of intent. But Toyota’s commitment to reducing the environmental impact of the iQ ranged wider still, and the car’s production facility at the Takaoka Plant in Japan was repurposed to accommodate an innovative new assembly line that maximised energy efficiency.

The iQ was launched at the 2008 Geneva motor show. Here was a sophisticated four-seat city car unlike anything else that was available. With a wheelbase of just 2000mm and an overall length of 2985mm, the iQ was a full 420mm shorter than its Aygo stablemate, and yet it was 65mm wider. 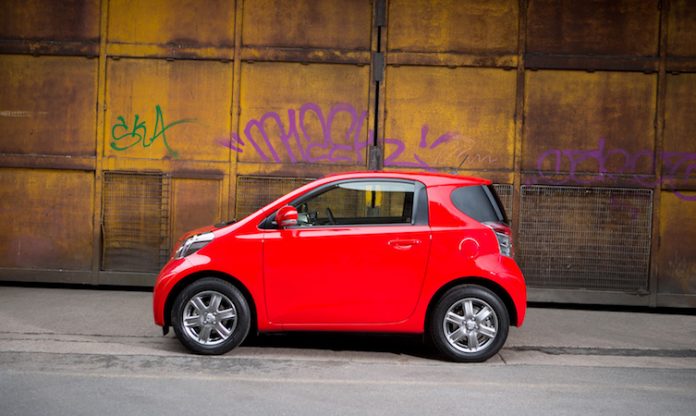 Dimensionally, the car’s nearest rivals were the two-seat Smart ForTwo (just 2695mm long but a strict two-seater) and the Smart ForFour (four seats, but considerably longer at 3752mm), but neither had the design sophistication, build quality nor equipment levels of the Toyota. In the UK the iQ was offered with a choice of two petrol engines, either a 68hp 1.0-litre VVT-i or a 98hp 1.33-litre VVT-i. The former laid down another industry benchmark: with CO2 emissions of just 99g/km, it was the first time a petrol-engined four-seater had broken the 100g/km mark.

The iQ’s distinctive styling gave it an energy and an instant identity all of its own. It was less than three metres long, but with a width of 1680mm and height of 1500mm, the iQ clearly followed the Japanese aesthetic design approach of ‘Perfect Imbalance’ (today, perhaps, we might call it ‘disruptive’). Its proportions forward of the B-pillar aped those of cars from a segment or two above, and yet from the trailing edge of the doors to the tail-lights, the car appeared abruptly truncated – and yet the design was at once harmonious and satisfying.

Toyota iQ: behind the wheel

To sit in and to drive, the iQ offered an almost bewildering contrast of contradictions. For the driver and front passenger, the cabin presented a near-optical illusion of space within an impossibly small silhouette. Thanks to the generous overall width and aided by ultra-slim seats and an innovative thin door design, front-seat shoulder room was plentiful and apparently at odds with the iQ’s exterior dimensions. Compared with the ostensibly larger Aygo, the iQ’s cabin was a full 140mm wider inside. 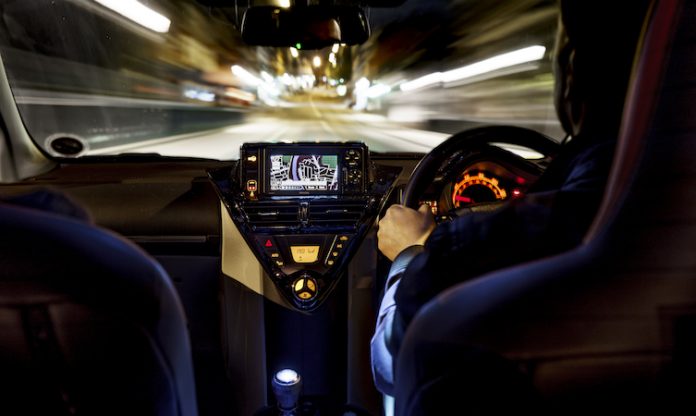 Ahead and to the side, the cabin offered a view akin to that of a fully proportioned car in the A- or even B-segment. But a glance over the shoulder turned that impression of space on its head, with an improbably compact rear cabin and a rear window quite literally within touching distance.

Once on the move the contradictions continued. Thanks to that compressed wheelbase, wheel-at-each-corner stance and a turning circle of just 3.9 metres, the iQ was as agile and nimble in tight city streets as its stature suggested. But at higher speeds and on the motorway the it remained refined and stable despite the dimensions. 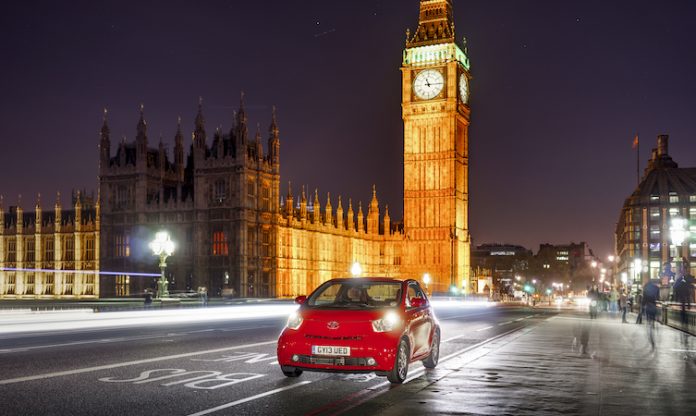 Somehow, too, the cabin was kept well insulated from the unsettling bump intrusion typical of so many short-wheelbase cars: ordinarily, when a compact car’s front wheels hit a large bump or pothole, the front suspension is still working to recover from the impact when the rears strike the same obstacle, which leads to passenger discomfort. But the iQ’s cleverly optimised front MacPherson strut and rear torsion beam suspension minimised such intrusions, and the cabin remained impressively undisturbed.

Every element of the Toyota iQ was engineered and packaged to save weight and space. The asymmetric design of the dashboard, with an ultra-compact air conditioning unit and a detachable glovebox, created enough space for the front passenger seat to be moved forward to free up rear passenger space. Under the bonnet, the differential was mounted ahead of the engine and the steering gear adopted a centre take-off design, both of which freed up cabin space while allowing shorter front overhangs. And an ultra-slim 32-litre fuel tank, which used a special fuel pump that addressed the issues of gradient-induced fuel starvation and level accuracy usually associated with thin, flat fuel tanks, was mounted under the front seats. 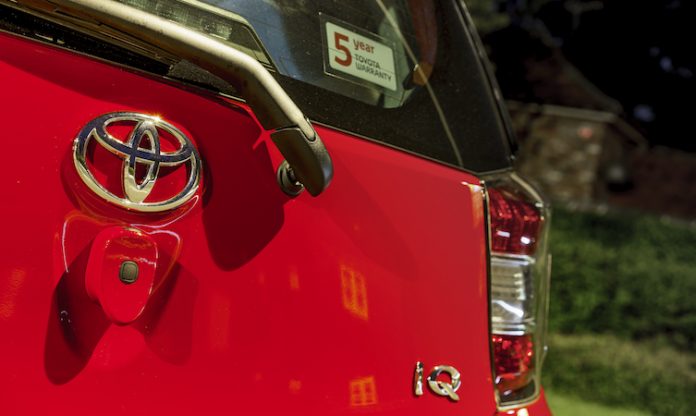 And yet the iQ was about more than nuts-and-bolts innovation. That interior was almost jewel-like in its execution was key to a deliberate strategy of altering consumers’ opinion of small cars and attracting new customers to the Toyota brand. Richly coloured trim materials adorned a cabin laden with stylistic flourishes that created an environment of urban sophistication. The ‘techno-organic’ design of the V-shaped centre console and the door armrests are actually mathematical emulations of the graceful, ocean-going manta ray, while the seamless integration of the audio unit and control functions enhanced the iQ’s premium feel.

At its launch the Toyota iQ was universally praised for its incredible packaging, deceptive big-car feel, dynamic handling and motorway stability. The car’s unique appearance and stylish design inspired a range of customisation option packs featuring eye-catching exterior decals and interior design flourishes, and there was even a high-performance version. The GRMN-tuned iQ Supercharger prototype, revealed at the 2011 Tokyo Auto Salon, was powered by a supercharged 1.33-litre VVT-i engine producing 128bhp and had a six-speed close-ratio gearbox, sports suspension, a full bodykit and 16-inch alloy wheels. 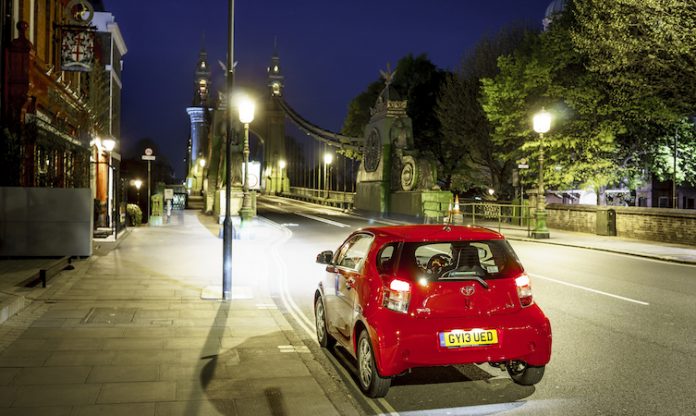 True to the iQ’s environmentally friendly agenda, there was even a battery-powered version, at least in pre-production form. The iQ EV Prototype appeared at the 2011 Geneva motor show. It was powered by an 11kWh battery pack (cleverly hidden beneath the front seat in place of the fuel tank), it could reach a top speed of 78mph and would travel up to 65 miles on a charge.

UK sales of the Toyota iQ stopped in 2014. Unfavourable exchange rates between Europe and Japan hampered sales, and alterations needed to meet upcoming EU emissions regulations would have further increased the model’s price. The model went out of production for other markets in 2015.

Despite this, the iQ remains a benchmark for engineering innovation, and the environmental message that drove its development has never been more relevant than it is today.