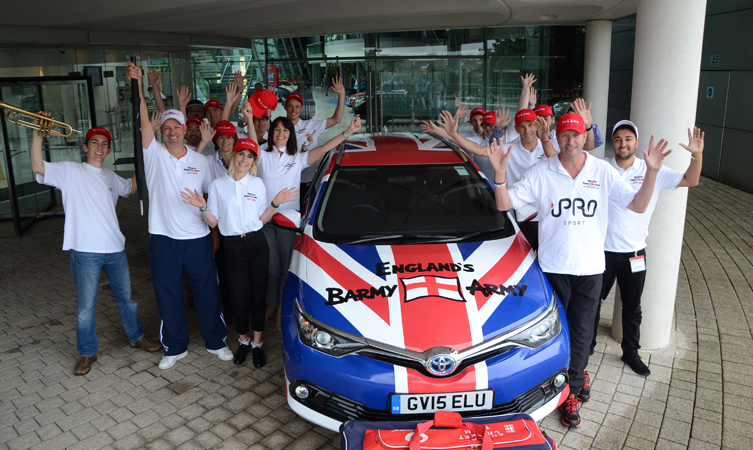 Because we love cricket here at Toyota GB, we have gone another step further with our support, but this time on the other side of the boundary line. Toyota GB is now helping the legendary legion of cricket fans the Barmy Army by lending them a British-built Toyota Auris Hybrid Touring Sports to support their charitable activities.

Collecting the car last week from Toyota GB’s Surrey headquarters on behalf of the Barmy Army were Managing Director Paul Burnham, along with Iain Millan, Steve Smith and Matt Nichols.

In typical fashion a trumpet solo accompanied the handover (to the hymn Jerusalem) with the Toyota GB cricket team on hand to lend their voices and support.

The Auris will be used to help the Barmy Army supporters with their nationwide charity cricket and golf tour, BAT2015, which has been created to help raise money for the Lord’s Taverners, and to celebrate the Barmy Army’s 20th anniversary.

As well as at the cricket and golf clubs hosting BAT2015, it will also be appearing at each of the remaining Test venues this summer as England continue their drive to win back the Ashes from Australia.

Commenting on the car, Paul Burnham said; “We are very thankful to Toyota for their support of BAT2015 and our travels throughout this summer. The Auris is a pleasure to drive and we are delighted, along with Toyota, to be supporting British manufacturing and hybrid technology.

The car will be at each one of our events, as well as every England Test match that we attend so keep an eye out for it!”

For more information about Barmy Army events for the rest of this summer, please visit www.barmyarmy.com.

The 2015 Toyota Auris, is now on sale and available with hybrid as well as new petrol and diesel powertrains. Visit Toyota.co.uk for more information on the Toyota range.