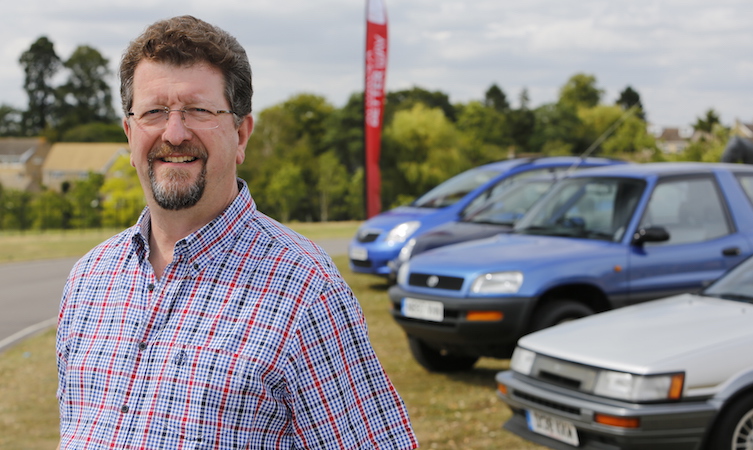 In 2015, Toyota is celebrating 50 years of selling cars in the UK – and it’s come a long way since the 1965 Toyota Corona and a four-car showing at the British Motor Show.

Read on to learn how a family connection brought him close to Toyota as soon as it arrived in the UK, what TMUK was like when it first started, and where he sees Toyota in the future.

Toyota Blog: Hi Tony. Toyota has been in the UK since 1965, and producing cars here at Burnaston since 1992. How would you describe Toyota’s progress since those two landmarks?

Tony Walker: It’s enormous. We started with cars being brought in by a small importer called Pride and Clarke in the 1960s and now Toyota Great Britain is a really major business in the UK.

It’s actually a very small world – my father had a small civil engineering business in Croydon and he knew John Pride. He was making the first import facility on the Isle of Sheppey, which was built on reclaimed ground that had to be stabilised, and my father did that work and put down a surface to store the first vehicles that arrived. They then built an office as a training centre in Croydon and my father did the work for that too. So I’ve always known about Pride and Clarke and Toyota.

It’s a huge development coming from Pride and Clarke, which was a small motorbike importer, to the Toyota GB we see today with a national chain of retailers and Toyota Manufacturing UK, one of the first Toyota plants in Europe.

We employ 3,500 people across the two plants, last year we made 172,000 cars and 225,000 engines. In total, we’ve made 3.1 million cars and about the same number of engines, and I think we’ve contributed significantly to the renaissance of the British motor industry.

The majority of the cars made in the UK these days are made by Toyota, Nissan and Honda in plants that were not here 30 years ago – the old British motor industry has been transformed. We’ve not just transformed car production, we’ve tried to really develop the British supply base as well.

TB: How has Burnaston changed since it started producing cars back in 1992?

TW: We started making a car called the Carina E on one line on one shift. We got investment a few years later for a second model, the Corolla, and we built a second assembly plant.

We now make Auris and Avensis on one line, and we produce 155 major variants (which we call katashiki), so there’s huge complexity to what we do. We have a highly motivated and engaged work force and in all of the time we’ve been in operation we’ve never had a single minute of industrial action – which for a car plant in the UK is a huge transformation from what British car plants were like in the 1970s.

TB: Has your approach to working with the Members who work at TMUK changed since 1992?

TW: I think the fundamental basis of the relationship between the management team and our Members has remained the same.

We’ve always put respect and trust at the centre of everything we do, as is the Toyota way. It means always sharing the business situation, and on a more daily level on the shop floor, allowing every member to contribute their best through sharing their problems, ideas and suggestions.

TB: How is production of the new Auris and Avensis going, now you’ve been up and running for a few months?

TW: We’re working flat out which is a good thing. We’re running overtime on every shift, doing two Saturdays a month and we are making sure that our colleagues on the sales side have all the vehicles they need for the showrooms in each country – and it’s a good place for us to be.

TB: Can you give us any insight into new processes or projects that you’ve introduced alongside the new cars?

TW: In terms of big changes that have come with the new Auris and Avensis, the biggest things are that we have had to fit new diesel engines supplied by BMW and put them inside the package of our car and also we have the new pre-crash avoidance system – Toyota Safety Sense.

Our members were involved in early prototype builds of the cars, and those who did that became master trainers. We also had a lot of new suppliers and had to make sure they were ready both technically and in terms of quality – we didn’t have a single problem for the dual start of production, and that’s almost unheard of for a car factory starting work on a new model.

TB: Is TMUK going to be introducing a model that uses Toyota New Global Architecture?

TW: Yes. The next Auris will be on the new TNGA platform, which will be very exciting. It’ll be the first full implementation of TNGA ‘C’ platform. We’ll be taking the opportunity to introduce new simple, slim, flexible production facilities as well.

Find out more about TNGA here

TB: One of the benefits of TNGA is the flexibility to produce a variety of models on a production line. Are there plans to introduce additional models when you introduce TNGA?

TW: We’re always looking to do more and to develop, and looking to the future for models that could be made at Burnaston – but we have no plans for that at the moment.

TB: Looking back, what did you think about Toyota before you worked here?

TW: I actually worked at Ford before Toyota and we looked at Toyota’s practices quite closely and tried to emulate a lot of their successes in Japan, so I was very pleased when I had the chance to work for the company.

I think the first car I really remember was the 1980s Celica with its pop-up headlights, and the Supra. The Land Cruiser was also a really well-known car that had that reputation of being able to go anywhere and cope with anything.

TB: What was your first Toyota company car?

TW: I think it was a Carina, one of the Japanese imports before we started making the Carina E, but I had one of ours built in Burnaston as soon as I could.

TB: What do you drive now?

TW: I have a RAV4, and my wife has an Auris Hybrid from the plant. We’ve not got a new Auris yet as the dealers are selling plenty and asking for as many as we can build at the moment!

TB: Where do you see Toyota in 50 years?

TW: I think we will be leaders in ultra-low emission vehicles and I’m sure we will be successful in developing hydrogen technology, so that’s where we would like to be in the medium term. We’re seeing the Mirai come through now, as a totally new technology. As with all new technology, the price will eventually come down and become accessible and an option for everyone.

On top of that, I think things will happen that we couldn’t possibly imagine – innovation knows no limits. I’m sure there will be more flexible transport solutions, and we’re already starting to see autonomous vehicles, but personally I feel there will still be a place for personal ownership of vehicles – partly because I enjoy it so much that I can’t think others don’t too. But equally there will be people who see no need to own a vehicle themselves and Toyota will provide them with a mobility solution too.

TW: We will have investment for the next Auris at both Burnaston and Deeside. Beyond that, I think it’s natural for us to aspire to become a supplier of a premium product. The UK is a great place to make premium products and so I hope we would continue to have something at the top end of the Toyota range.

That said, we’re first and foremost a plant that has to compete and perform, and deliver quality every day. That will always be critical for us – so really our plan is to keep doing what we’re doing and getting better at it.

TB: Thanks for your time, Tony.