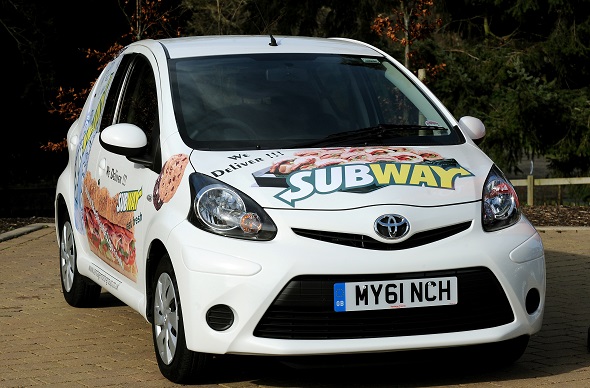 Since 2005, over 700,00 Toyota Aygo city cars have found homes across the world; it seems for many, the funky model is the best thing since sliced bread.

Now, Panmario Bordesley Green Ltd, the company which holds the franchise for SUBWAY® stores in the West Midlands has joined the Aygo fold, and has created a four-strong Aygo fleet to deliver customer orders from its store in Bordesley Green and, in the near future, from six other branches.

Each car is ready to earn its crust in full SUBWAY® livery, with one benefitting from an extra garnish in the form of a personalised MY61NCH registration plate.

Aksar Khan, Panmario Bordesley Green director, said: “Being able to offer our customers the option to enjoy their favourite made to order Subs and Platters from the comfort of their own homes is an important next step for us. The Toyota Aygo is just the right vehicle for the job – small, economical and easy to drive through city traffic. We are also impressed by its reliability and the service we’ve received from the Vantage Toyota Birmingham dealership.”

With a tuneful 1.0-litre 3-cylinder engine that delivers up to 65.7mpg on the combined cycle, it doesn’t cost a lot of dough to run an Aygo, and this has remained key to the model’s appeal for retail and fleet buyers alike, since its launch in 2005.

Further information about the Aygo range is available on the designated section of the Toyota UK website.