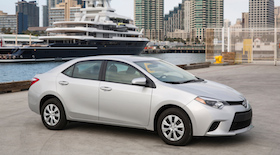 The Toyota Corolla has broken sales record for decades, and now it has a new accolade to add to the collection.

It claimed the title of the world’s best selling car in 2013, with internal Toyota data confirming 1.22 million recorded sales. It’s evidence of the enduring popularity of a name-plate that has been going strong since 1966, amassing a truly ming-boggling 40.72 million cumulative sales by the end of February this year.

It’s not just a single car that’s achieved this feat, but rather a model range that has changed with the times to give customers exactly what they want. The appeal of the latest generation Corolla is proving particularly strong, helping it post a five per cent year-on-year increase in sales across 150 countries and regions worldwide.

Even though the Corolla name has not been part of Toyota’s UK line-up since 2007 (it’s since been replaced by the Toyota Auris), more than half a million were sold here from the mid-1960s and almost 200,000 are still on the road today.

The 2013 figures have been calculated by Toyota Motor Sales in the USA using independent Polk new vehicle registration data from IHS Automotive, which captures 96 percent of global new vehicle volumes. The stats confirm Corolla is the world’s best-selling vehicle model for 2013 with global registrations of 1,098,524 units.

Do you have a Toyota Corolla? We’d love to hear your story – let us know in the comments below!