Our guide to all that’s new about the Toyota Auris lists the car’s main developments and improvements, below. 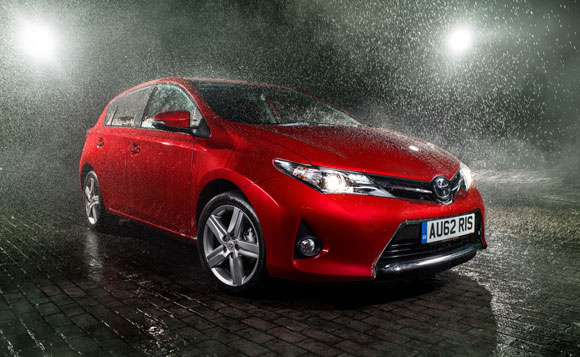 The Toyota Auris has an all-new look. At the front it displays the new family “face” of Toyota with new headlight units that emphasise the car’s width and its road-hugging stance. It sits 10mm lower to the ground than its predecessor.

The profile is stronger, too, with a steeply-raked windscreen and a pronounced “belt line” that rises from nose to tail. Blacked-out centre and rear pillars help make the window area blend with the sharply angled  rear pillar – adding another dynamic visual element to the car’s appearance. 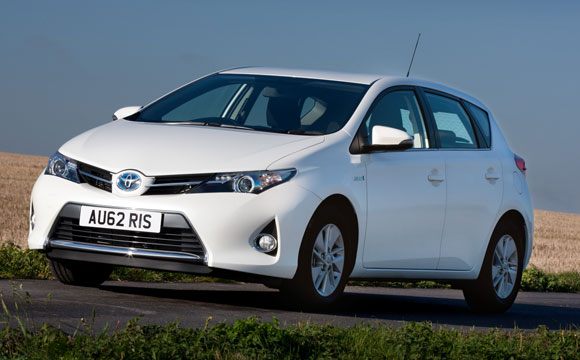 New Auris is 30mm longer than the outgoing model, meaning improved space inside.

New front seats offer a greater adjustment range, and there’s a wider angle of steering wheel adjustment. There’s more space in the boot – 360 litres with the rear seats in place. That goes for the new Auris Hybrid too, thanks to clever repositioning of the battery unit under the rear bench. To make loading easier, the tailgate opening is 90mm wider and there is a new dual-level adjustable deckboard.

Toyota is committed to building cars that are more rewarding to drive, a determination that has already delivered the new Toyota GT86 sports coupé. Similar design and engineering principles have been applied to new Auris, giving the car a lower centre of gravity and lower seating position for the driver.

Although Auris’s basic suspension geometry is unchanged, the arrangement has been tuned to deliver a better balance of driver feedback, responsiveness and ride comfort. The electric power steering has also been improved with a quicker steering ratio – a key element in giving the driver a more engaging experience at the wheel.

New Auris marks a significant drop in the model’s average CO2 emissions, the figure falling 13 per cent compared to the previous model, to just 109g/km for the European model range.

Toyota has achieved this by taking a total vehicle approach to reducing emissions and improving fuel consumption, while at the same time improving drivability and dynamic performance. All the petrol and diesel powertrains benefit from Toyota Optimal Drive adjustments to improve performance, and the hybrid system, too, delivers even lower emissions than before – down to 87g/km for the Icon model.

The Auris Active 1.4 D-4D returns combined cycle fuel consumption of 74.3mpg and generates 99g/km – an improvement of 15.4mpg and 29g/km compared to the current Auris diesel (which does not use Stop & Start technology). This brings the diesel Auris below the UK’s 100g/km benchmark for zero annual road tax (VED) and exclusion from the London Congestion Charge, with further beneficial tax ratings for company car users and operators.

The 1.33 Dual VVT-i petrol engine returns combined cycle fuel consumption of 52.3mpg with 125g/km CO2 emissions, a substantial improvement on the 48.7mpg and 135g/km performance of the current model.

There are improvements from the 1.6 Valvematic, too: with manual transmission and 16-inch wheels the unit returns combined cycle fuel consumption of 47.9mpg and generates 138g/km CO2 emissions, compared to 42.8mpg and 153g/km for the current model.

This automatically shuts down the engine when the car comes to a halt and the driver moves the gear shift to neutral. Restart is within half a second when the clutch pedal is pressed. Toyota’s technology even allows the system to operate when the air conditioning is running, although it will not intervene if it detects that the cabin is yet to reach the selected temperature.

The 1.6-litre Valvematic petrol engine is available in new Auris for the first time with Toyota’s Multidrive S transmission. This constantly variable transmission (CVT) can be driven as a full automatic with seamless gearshifts, or the driver can switch to Sport mode for stepped, seven-speed sequential shifts, using the gear lever or paddles on the steering wheel.

Auris’s petrol and diesel engines save on fuel by using a new Charging Control System, which governs the amount of power the alternator takes from the engine. When the car is slowing down, power generation voltage is increased to maximise battery charging; at other times the load on the engine is reduced.

A new Intelligent Park Assist system is available, fitted as standard to Excel models and an affordable option for Icon and Sport versions.

The system, which comes with front and rear parking sensors is simple to use, and has been made more versatile, being designed to cope with “non-standard” parking spaces, including those on bends.

It will take account of objects on the other side of the road that might affect a parking manoeuvre, such as other parked cars or obstacles in narrow streets. It also minimises the degree to which the car steers out to the opposite side of the road in order to enter a space.

Auris introduces a new Toyota grade structure in the UK. This starts with the entry-level Active trim, and progresses through Icon and Sport to the top-of-the range Excel.

The 1.33 Dual VVT-i engine is available in Active and Icon grades; the 1.6 Valvematic in Icon, Sport and Excel; and the 1.4 D-4D in all trims. Auris Hybrid is offered in Icon and Excel versions.

The new, British-built Auris will go on sale at the end of this year, priced from £14,495.

Auris’s new styling extends to new-design 15, 16 and 17-inch alloy wheels. There’s a wider choice of exterior colours as well, with the introduction of the new Zenith Blue and Avantgarde Bronze metallic shades.