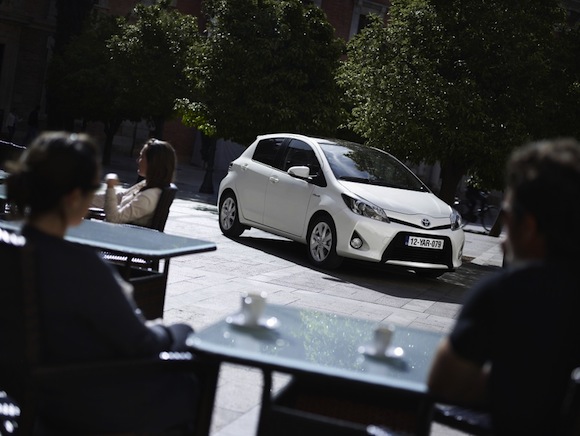 Here’s a sample of the reviews published so far.

Jesse Cross of Car Magazine awarded the Yaris Hybrid a score of four stars in his review, after enjoying the refined and quiet nature of the car:

“The powertrain is refined and in EV only mode, virtually silent. There’s nothing happening at rest either, so all-in-all the Yaris Hybrid delivers a serene driving experience ideal for urban commutes.”

He also commented on the impressive economy:

“Does it deliver? In a word, yes. The combined consumption figure is 80.7mpg and with two blokes in the car we managed a best over one route of 78.5mpg, which is a lot closer than you get to official figures in some cars.”

“The Yaris Hybrid is such a clever package and promises genuinely frugal motoring… it’s roomy and relaxing to drive and is the ideal urban commuter or second car.”

Phil Lanning in The Sun gave the Yaris Hybrid’s styling his seal of approval:

“The rest is a shrink-wrapped Prius — an engineering feat in itself. Crucially for a supermini, they haven’t lost cabin or boot space. The interior is a quality affair, nicely finished with a classy media/navigation system.“

“Once on the move, it also drives like a Prius.”

Lem Bingley at greenmotor.co.uk was impressed that the Yaris Hybrid doesn’t require compromise in terms of space. He said:

“Toyota is unique in fitting such a complex hybrid system to a supermini – the Honda Jazz Hybrid is similarly priced but not nearly as sophisticated nor anything like as economical.“

“And Toyota has squeezed all the components in without visible compromise – the 286-litre boot is unaffected, although the fuel tank has shrunk from 42 to 36 litres, to make way for the hybrid battery. But the excellent economy should still see as much as 500 miles between fill-ups.“

“If you want a relaxing, economical and refined hybrid supermini there really is no other choice.”

The team over at Autocar have now had the chance to review the new Yaris Hybrid on UK roads. How did our newest hybrid fare in the hands of road tester Tim Watson?

“Driving the Toyota Yaris Hybrid is effortless and its cabin is a superbly quiet place to be,”  says the opening line of the review.

Avoiding the obvious route of focusing on fuel economy, it’s the all-round package that stands out:

“Toyota has done a terrific job with the ride and handling. The chassis is direct, steering light and car stable, even in the strongest of winds and heaviest of rain.”

“Supermini hybrids are still rare, but they make strong sense – and this is a good one.”

To read the review in full, visit Autocar.co.uk.

The Toyota Yaris Hybrid launches in the UK in summer 2012 and is available to order now – visit Toyota.co.uk to find more.