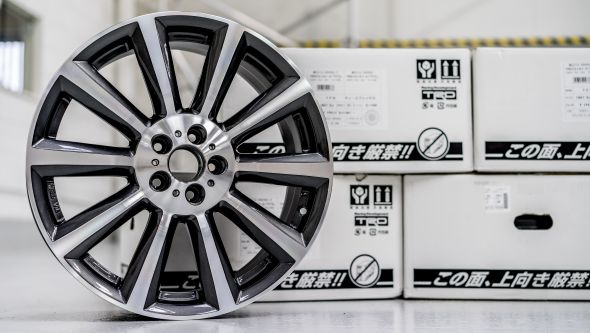 Sales of Toyota’s hybrid vehicles are rising exponentially as people discover the numerous environmental and emotional benefits of this dual-source powertrain.

In view of this, we thought it would be appropriate to demonstrate our own love for hybrid in a new and quirky way – by building a Toyota Racing Development (TRD) version of the ultra-low emission Prius Plug-in.

As far as we are aware, a project like this has never been tackled in Europe. So we thought we would share the experience through six build chapters, each of which will be published weekly in preparation for a special challenge revealed in July.

Below is the first chapter, which concentrates on the dramatic new wheel and tyre package.

As the sole connection between ourselves and the road, we knew the choice of wheels and tyres for our TRD Prius Plug-in project had to continue to play its vital role in the safety and efficiency of the whole car.

Together the original wheels and tyres have a rolling circumference of 1,994mm, a figure that must be maintained in order to retain the accuracy of the speedometer. While there are online tools available to help people work out the overall circumference of any wheel and tyre package, TRD helpfully removes all doubt from the equation by recommending tyre sizes for the variety of approved wheel upgrades marketed for all current variations on the Prius platform.

The design we chose is the attractive, diamond-cut TRD ‘TF6’ wheel, a version of which is also found on the TRD GT86. It is supplied with significantly larger 7.5×18″ measurements and an offset (the distance between the centre of the wheel and its mounting face) that allows it to fill the bodywork more aggressively without running the risk of fouling the wheel arch returns.

TRD specifies a 225/40 R18 tyre to accompany this particular TF6 but leaves the make and model to the end user. Our final plan for the TRD Prius Plug-in will involve some circuit work (more on that later) but we knew it would not be necessary to buy tyres with a super-sticky compound that would deliver a dramatic increase in grip at the expense of a decrease in fuel economy.

Instead, we studied the new coding regulations and bought a set of Goodyear EfficientGrip Performance tyres with the lowest possible rolling resistance, lowest noise production and most efficient water dispersion characteristics.

New centre caps and stainless steel valves were supplied by TRD to go along with the new wheels, the former featuring a bolt-in rather than pull-in design that uses less space within the shallower tyre profile.

One final item that had to be purchased separately was a new set of wheel nuts, so we pushed the boat out on slim TRD branded nuts with a unique hex pattern.

Installation and balancing of the tyres was handled by a technician at our top secret press fleet garage using high quality machinery. Indeed, so accurate is the balancing machine that imbalance is measured across the whole rolling assembly, indicating how much the tyre should be rotated around the wheel to minimise the need for additional weights. Two of the wheels needed no balancing whatsoever, so these were fitted to the front of the car to keep the steered end as pure as possible.

Look out for the second build chapter next week, when we tackle the front suspension.

We use cookies on our website to give you the most relevant experience by remembering your preferences and repeat visits. By clicking “Yes, I Agree”, you consent to the use of all the cookies.
Cookie settingsAccept All
Manage consent

This website uses cookies to improve your experience while you navigate through the website. Out of these, the cookies that are categorized as necessary are stored on your browser as they are essential for the working of basic functionalities of the website. We also use third-party cookies that help us analyze and understand how you use this website. These cookies will be stored in your browser only with your consent. You also have the option to opt-out of these cookies. But opting out of some of these cookies may affect your browsing experience.
Necessary Always Enabled
Necessary cookies are absolutely essential for the website to function properly. This category only includes cookies that ensures basic functionalities and security features of the website. These cookies do not store any personal information.
Functional
Functional cookies help to perform certain functionalities like sharing the content of the website on social media platforms, collect feedbacks, and other third-party features.
Performance
Performance cookies are used to understand and analyze the key performance indexes of the website which helps in delivering a better user experience for the visitors.
Analytics
Analytical cookies are used to understand how visitors interact with the website. These cookies help provide information on metrics the number of visitors, bounce rate, traffic source, etc.
Advertisement
Advertisement cookies are used to provide visitors with relevant ads and marketing campaigns. These cookies track visitors across websites and collect information to provide customized ads.
Others
Other uncategorized cookies are those that are being analyzed and have not been classified into a category as yet.
SAVE & ACCEPT
Powered by