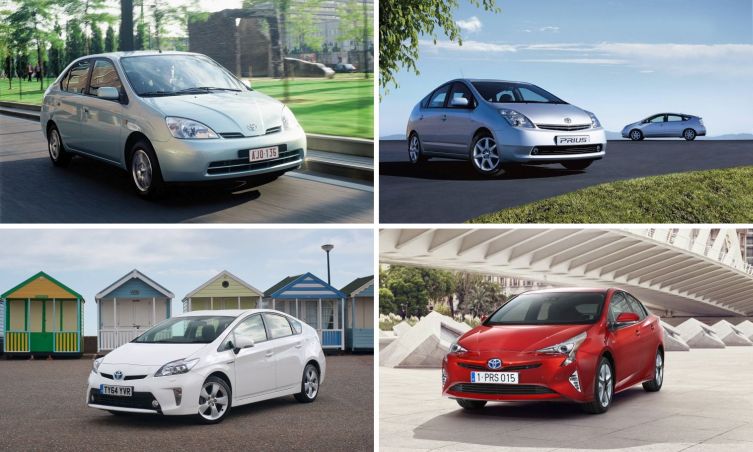 Think you know all there is to know about the Toyota Prius? We’ve trawled through our extensive back catalogues to bring you a selection of fascinating, didn’t-know-that-before facts from all four generations.

1) The first-generation Prius helped conserve energy through extensive use of heat insulating material in the body surrounding the cabin so the air conditioning system didn’t have to work as hard.

2) The flattened floor and centre console of the first-generation Prius was designed to allow the driver to easily exit the vehicle from the opposite door when parking in tight spaces. In addition, the front door hinges were placed on a slant so they could open wider.

3) The 1.5-litre Atkinson cycle engine in the first-generation Prius was a low-rev machine that redlined at just 4,500rpm. Because of this, Toyota was able to optimise fuel efficiency by using lighter moving parts, a smaller diameter crankshaft, less spring in the piston rings, less load on the valve springs, and by significantly reducing internal friction.

4) Thanks to its comprehensive system of emissions reduction – focusing on CO2, HC, NOx and CO – the first-generation Prius was able to position itself as the world’s cleanest car in terms of both CO2 and harmful emissions.

5) Toyota employed a number of methods to reduce the weight of the first-generation Prius, including extensive use of high-tensile steel and rear window glass that was thinner than normal. The upper portion of the rear screen was also coated with a ceramic sunshade material to reduce the amount of heat entering the car and protect rear passengers from direct sunlight.

6) By the time the Prius became officially available in the UK, Toyota had sold more than 43,000 Prius cars since its 1997 launch in Japan. That was already more than the total number of electric vehicles sold throughout the world since 1960.

7) Compared with the outgoing model, the second-generation Toyota Prius offered more of everything, except in two vital areas – fuel consumption and emissions.

8) The electric motor in the second-generation Prius offered a greater level of output to weight/volume than any other motor before it. It was more powerful than most 1.0- to 1.2-litre internal combustion engines and offered more torque at low revs (0-1,200rpm) than a V6 diesel.

9) The new Prius was the first vehicle in the world to simultaneously comply with strict emissions regulations in three separate continents, comfortably exceeding requirements in Europe, Japan and the U.S.

10) Chassis components of the second-generation Prius were derived from contemporary Toyota models. The MacPherson front struts were developed from units fitted to the Avensis and the rear torsion beam set-up was shared with the Corolla. European models were tuned with thicker anti-roll bars and stiffer suspension than their US equivalents.

11) The higher voltages created by the batteries and converter of the second-generation Prius enabled Toyota’s engineers to equip the car with more drive-by-wire technologies than any other car at the time. Connected by the first application of CAN Multiplex wiring, this included the world’s first all-electric active safety package and the first fully electric brake-by-wire system.

12) The distinctive aerodynamic shape introduced with the second-generation Prius was officially described as ‘triangle monoform’ and played a significant role in delivering the car’s class-leading drag coefficiency figure of Cd 0.26. The long-roof silhouette with raised rear deck initiated a new crossover concept that aimed to merge saloon and estate car styles.

13) Toyota designed a new world-first electric air conditioning system for the second-generation Prius that deleted its dependency – and therefore its fuel draw – on the petrol engine. Powered now by the hybrid battery, it also meant the interior could continue to be cooled when the engine was shut off.

14) The engine of the second-generation Prius offered the world’s highest level of thermal efficiency. Despite the clear fuel efficiency advantages of combustion on the Atkinson cycle, Toyota remained the only manufacturer to use this engine cycle in production cars.

15) By the time of the launch of the third-generation Prius, Toyota had sold 1.7 million hybrid vehicles throughout the world, over 70 per cent of which had been Prius models. By the end of production, this model had accelerated that combined figure to over 3.5 million units.

16) The third-generation Hybrid Synergy Drive unit was 35 per cent more powerful yet 23 per cent more fuel efficient and 25 per cent cleaner in terms of CO2 emissions than the first. It remained the only full hybrid powertrain available in the mass-mobility market.

17) Within the family car market, the Prius was the only car to combine the fuel consumption levels of a small city car with a cruising range of almost 715 miles – 93 miles more than the second-generation car despite having the same size fuel tank.

18) Now air-cooled, the electric motor in the third-generation Prius was lighter in construction and 20 per cent more powerful than before. Its maximum revolutions had been more than doubled to 13,000rpm.

19) Enhancements to the aerodynamics of the third-generation Prius (now Cd 0.25) included a new flip-up design along the back edge of the bonnet to minimise disruption to airflow over the windscreen wipers. The washer jets were also located beneath the bonnet line for the same reason.

20) The surface grain of the upper instrument panel is exclusive to Prius and reflects its environmental credentials with a design inspired by leaf vein patterns. This was appropriate because the third-generation Prius was the first model to feature Toyota’s new ecological plastics – injection moulded plastic derived from plants – in the interior trims.

21) The solar-powered ventilation system available in the third-generation Prius could reduce cabin temperature by up to 35*C before passengers returned to the car. Similarly, its world-first remotely operated air conditioning system could run for up to three minutes before the car is occupied.

22) No drive belts are used in the powertrain of the third-generation Prius, a world first that improved reliability and reduced maintenance costs. The efficiency of the brake regeneration system is also kind to brake pads. So much so, in fact, that by the time of the launch of this generation, only 8.7 per cent of all Prius models sold in Europe had required new brake pads.

23) The stand-out design of the latest Prius is both functional and distinctive. The guiding concept was for it to ‘fold in the wind’, controlling airflow by effectively wrapping the car in a single veil of air. Using a new wind tunnel, millimetre-size changes were applied on an unspecified number of full-size models to hone the perfect body.

24) The fourth-generation Prius delivers the biggest step-change between any generation of Prius, achieving improvements of more than 20 per cent in fuel economy and CO2 emissions.

25) In all, there are 22 sensors available around the fourth-generation Prius. They are designed to add to the feel-good experience by reducing stress, particularly in urban traffic.

26) The air conditioning system adjusts its performance according to outside temperature, the amount of sunlight, and how many people are occupying seats in the vehicle. Airflow is minimised around any empty seats.

27) Thanks to its ability to draw more on its electric power, the new Prius is the first to be able to pull a trailer. The braked and unbraked towing capacity is now 725kg.

29) Faster steering racks have been installed on the fourth-generation Prius. Outgoing models on 15-inch wheels used to have a relatively slow 17.6:1 ratio, whereas equivalent models zip from lock to lock with a much more responsive and sporty-feeling 13.4:1 steering ratio.

30) The new Prius is the first Toyota built on the new adaptable TNGA platform. Its specific variation is known internally as GA-C and will underpin future models.

31) Toyota continues to use nickel-metal hydride batteries in the new Prius. This suits Prius’s global market needs, but because battery technology has progressed Toyota has been able to make the pack smaller, more powerful, faster charging and longer lasting.