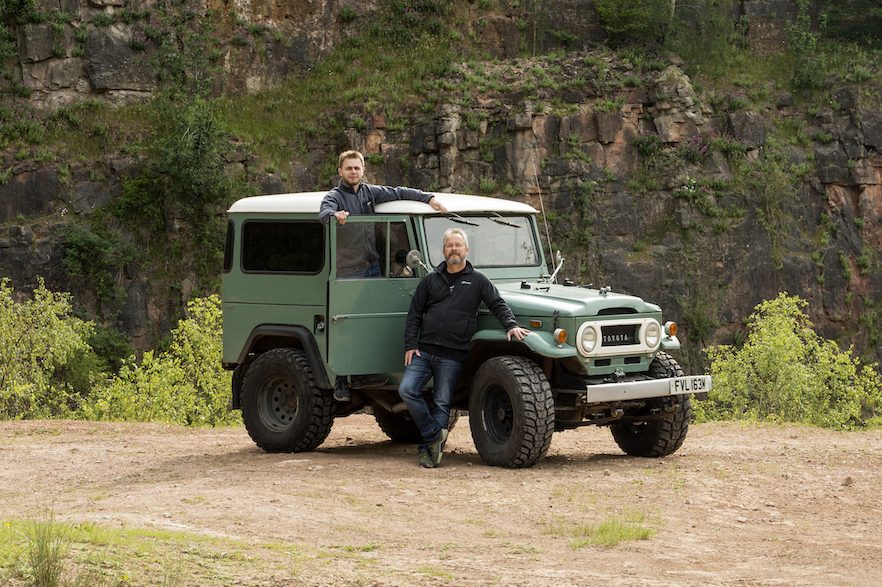 With four different Land Cruisers in his collection (FJ40, an HJ60, an 80 Series and a 100 Series 50th Anniversary), Jon Beynon definitely knows a thing or two about our durable off-roader. But the undoubted jewel in the crown is his rare FJ40 Land Cruiser. His passion for Land Cruisers is so infectious that even his son, Alfie, is now the proud owner of one. We spoke to both of them about why they are so passionate about Land Cruisers.

What started your love for Land Cruisers?

Jon: “It started a few years ago, I had spent a lot of time on the German car scene and my business partner recommended getting a Toyota Land Cruiser instead, so I went out and found one and have been driving one around for the past 15 years. They are some of the most trouble-free cars I’ve ever owned which is a massive positive for me.”

Would you say you have been converted to a die-hard Land Cruiser owner now?

Jon: “I never say never but the Land Cruiser is my all-time favourite model and, especially some of the older ones, they are just so iconic to me, and I think they are such a great car and a rare sight to see driving around on UK roads.”

Is that what has drawn you to your FJ40 Land Cruiser?

Jon: “As a young man, there were only two cars I wanted to own, one was a Porsche 911 which I was lucky enough to own, and the other was an FJ40. I tried to find one in this country, and it proved extremely challenging as it was never officially sold in this country. Eventually, I found one on eBay for sale in Australia for about 6000 Australian Dollars (roughly £3000 at the time) and one night I hit the button and bought it. I had it shipped all the way over and eight weeks later it was here.”

What sort of condition was the FJ40 Land Cruiser in when it finally arrived?

Jon: “It needed some love and care. I can remember when I first picked it up that the pins for the axles weren’t in the leaf springs and one of the axles had been pushed forward, so it needed to be ratcheted straight and then put onto a trailer and brought home. It didn’t originally come with the 1F engine but a Chevy V8 instead, which was common practice in Australia.

Sadly, the Chevy V8 didn’t last too long so I replaced it with another Chevrolet engine. Around this time, I had purchased another Land Cruiser (diesel) and after running it non-stop for a weekend’s off-roading, I realised that what I needed to do was stick a Toyota engine back into the FJ40. I managed to purchase a 3B engine, which is a rare engine in the UK and slotted it and converted the gearbox to a five-speed manual to bring it up to the 21st Century and that is how it has been running, untouched, for the past five years and it has been faultless.”

Is that the biggest modification that you have done to the FJ40 Land Cruiser?

Jon: “It is the biggest conversion I have done to any of my Land Cruisers, I like to try and restore all the Land Cruisers I have back to their original condition, and any modifications that I do end up doing are the type that can be reversed. The FJ40 is the only one that has had its engine changed, first to the V8 and then back to a Toyota unit. It was when I was on Parkamoor bouncing around and the Chevrolet engine kept cutting out, despite being tuned by a specialist to make sure it was running properly, that I decided I needed to put a Toyota engine back into the FJ40.

The 3B is an ultra-reliable engine and is known as the million-mile engine and will undoubtedly see me out so this will be the final engine modification I’ll do. I’m quite happy going 60mph because speed is not what my voyage of ownership is all about. For me, it’s about getting there and back in one piece.”

Does this mean you are happy with the FJ40 Land Cruiser as it is?

Back to standard is really want I am aiming for, putting it back to what it was supposed to be, I believe the term is resto-mod. The most important thing is that anything that I do to it is for my own personal reasons, not because the car needs it.”

Is the FJ40 Land Cruiser the favourite out of your collection?

Jon: “It’s like choosing between your children. The FJ40 is the most fun to own in terms of how it makes other people feel. It is a long way away from a modern Toyota with its leaf springs, no foam on the seats. It has a very back to basics type feel to it, which is because it is. It is essentially a truck from the 1970s. The HJ60 is my favourite one now, I like how boxy the design is but my go-to car every day is the 100 Series. It is very comfortable, it’s automatic and it’s powerful. The 80 Series is basically an off-road touring rig that is built for a purpose.”

Alfie, what made you decide to buy your dad’s car?

Alfie: “I’ve had a couple of cars before, Toyotas and a Lexus, and never really had any issues with them but I have always loved the idea of owning a Land Cruiser. They are easy to work on if they ever do go wrong and I’ve always just been a huge fan of the model, plus dad has always had them for the past 15 odd years so they have always been in my life.”

Jon: “It was Alfie who badgered me to sell the BJ74 to him, it wasn’t me forcing something onto him. And the beautiful thing for me with Alfie owning it is that I still get to see the car every day. I’m just not responsible for taxing, fixing or insuring it.”

Are you going to follow your dads’ path and keep it stock?

Alfie: “I’m not sure at the moment, if I do modify it then I want to make sure I can reverse it as all the modifications on it currently are easily reversible.”

Jon: “One of the great things about the BJ74 that Alfie owns is that from the factory, it has cable lockers, it has a PTO winch, it has a heavy-duty leaf-sprung suspension so it has all the mods that people would want. So apart from driving it and have fun, what other mods could you do to it? A new radio or something but out of the box, it is the perfect car. If you are happy to do that speed and not race anybody off the lights, then it is an ideal car.”