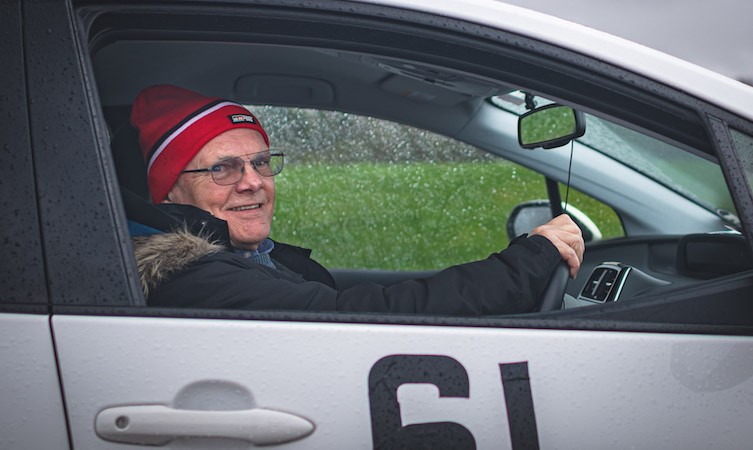 The Toyota Parallel Pomeroy Trophy attracts an eclectic mix of motors united under one common banner: the Toyota badge on the bonnet. But at this year’s event, held at Silverstone on 15 February, one car stood out as a particularly incongruous entrant: a gleaming white Prius Plug-in hybrid.

The petrol-electric plug-in hatchback mates a 1.8-litre VVT-i petrol engine with an electric motor and an 8.8kWh battery pack for outputs of 121bhp and 184lb ft, a 0-62mph time of 11.8sec and, if you’re light-footed enough, an electric range in excess of 25 miles. None of which marks the Prius Plug-in out as an obvious entrant in any form of motorsport – even one as friendly and low-key as the Toyota Parallel Pomeroy event. But that wasn’t going to stop Frank Griffin.

Frank, 75, from Hemel Hempstead, is a petrolhead through and through, with a back-catalogue of past motors that puts most of us to shame. Remarkably, though (well, we think it’s remarkable), for a man who has owned well in excess of 100 different cars, the Prius Plug-in is his first Toyota.

TGB Blog: Tell us about all these non-Toyotas you’ve owned, Frank.

And yet after that lot, the Prius Plug-in is your first Toyota. What took you so long?

“That’s right. It’s fantastic how eventually you come round to the one that you should have had in the beginning. About 18 years ago we bought a Honda Civic Hybrid. It was a nice car and we had it for 16 or 17 years. After that I started looking around for the next one and thought, ‘Hybrids? That’s Toyota’s area’. 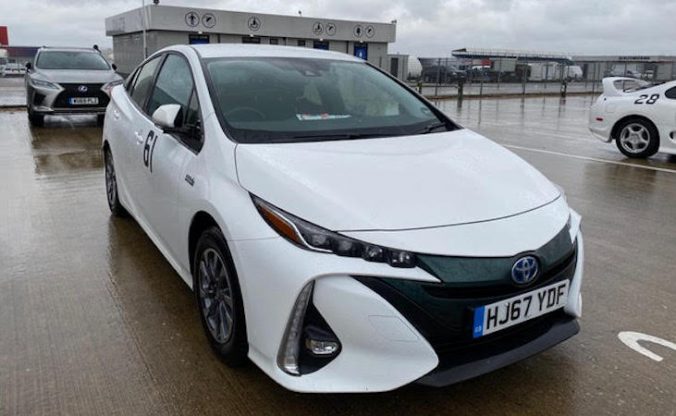 “We looked online and saw the Prius Plug-in. It looked really quite aggressive, which appealed, and of course it’s a plug-in. Obviously we’re going as green as we can – I’m a petrolhead but I appreciate that we all have a part to play. We were on holiday at the time, so we visited Westover Toyota in Bournemouth, who gave us a test drive.”

“I cannot tell you how lovely they were. We just walked in off the street and asked for a test drive and the sales manager couldn’t do enough. We were so impressed with Westover. Since then we’ve had it serviced at our local Toyota dealer, Steven Eagell in St Albans, and I’ve been very impressed with everything.”

Did you do your homework beforehand to decide if a plug-in hybrid would work for you?

“I wanted an electric car, but at the time we bought the Prius [late 2017], the range on most electric cars was a bit silly. From our point of view the Prius Plug-in is an in-between step to an electric car – if we run out of electricity we still keep going. And the car is magnificent, I love it.”

What’s it like to drive? There’s a lot of technology packed in there – did you find it easy to master?

“It’s a limousine, in the sense that it’s very easy to drive. You don’t have to think about anything as far as the engine management is concerned, and of course the economy is very good. At first I thought it’s a lot of effort to have a battery that only does 29-30 miles on a charge, but actually that covers most of our local journeys. I’m very impressed with it.

“At first there was so much to take on board – I’ve never had so many things at my fingertips! Yes you can change to Eco mode or Power, but I don’t normally do that, I just let it do everything itself. The cruise control is adaptive and I’ve never had that before. I’ve been a hands-on driver all my life and it’s a bit daunting to let the car do what it says it will do; it just takes a while to get the confidence to use it all.”

What brought you to the Toyota Parallel Pomeroy Trophy?

“It was the Toyota Enthusiasts Club. I always join the member’s clubs because it gets you more au fait with the car. I do get a little bit enthusiastic and I like to get as much as I can out of my cars, go on meets, do things like the Parallel Pomeroy Trophy. That’s how I got to know about the event: it looked fun, I applied and I got included, which was great.”

How did you get on at the event?

“I came 26th. There were around 70 entrants so I was roughly in the middle. It’s the first meeting of that type I’d done. I couldn’t visualise the Toyota logo in the cones so I made a few muck-ups there. But it’s all fun. It was a good crowd and there was also that lovely element of youth who take this sort of thing all very seriously. The event was great, it gave me a lot more confidence in the car. Steering madly around bollards and braking like mad just proved that the Prius Plug-in is even better than I had come to realise on the road.”