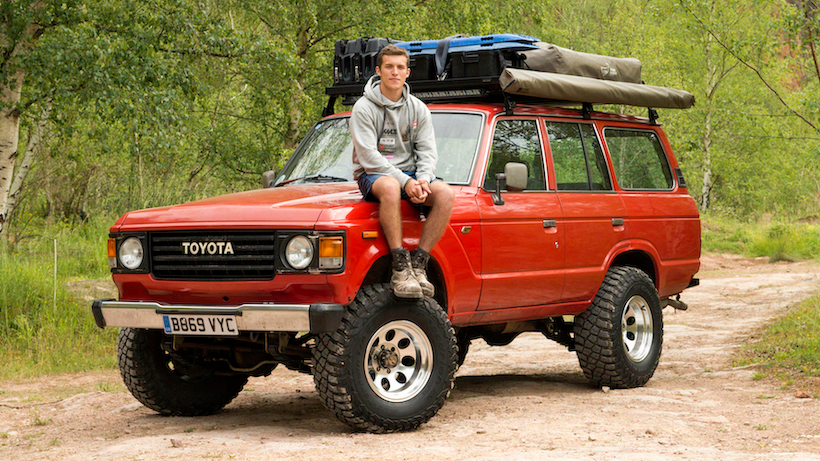 When you think of automotive influencers you often associate them with exotic supercars. However, 25-year old Callum Otter is bucking that trend with his rare HJ60 Land Cruiser. Combining his love of Overlanding and his unique 1970s 60-Series, Callum has become an ‘Overlanding Influencer’ and giving his beloved car its time in the spotlight. We spoke to him about what it means to be an influencer, his trips and most importantly, his HJ60.

What attracted you to this particular HJ60 Land Cruiser?

Callum: “I’ve always been into old-school trucks. My original plan was to try and get a 40-Series but couldn’t get hold of one. I went up to a friend’s workshop, and he said he had a Toyota for sale, and saw the HJ60 underneath a shelter. I took it for a drive and that’s when I knew I wanted it. So I ended up buying it and then I had a plan to turn it into an overland old-school retro truck. I bought all the accessories and added a roof rack, tents, tires, and a lift kit to make it perfect for an adventure at the weekend, but still capable to do all the off-road stuff that you want to do and keep up with the newer trucks. I love Land Rovers to bits and I’ve got one, but there’s always a bit of a rivalry between Land Rovers and Toyotas. I know a lot lot of off-roading enthusiasts who have started with Land Rovers, but seem to gravitate towards Toyotas eventually because there’s something a bit different about them. The HJ60 is particularly unique because it’s so rare.”

Have you always loved utilitarian vehicles like Land Cruisers and Defenders?

Callum: “I was never into the Toyotas when I first started, it was always Defenders because they were so iconic. But once you learn more about other trucks out there, you get to know which ones are reliable and which ones are well made and Toyota is one of the best. Most of the Land Cruisers, they’re in the Middle East or out in the middle of nowhere and they’re still going around, some of them with a million miles on the clock, which shows just how tough and durable they are. I’ve always loved Defenders but I am also developing a real liking for Land Cruisers, too. The Defender is great off-road but I prefer the Land Cruiser for camping trips because it’s more comfortable.”

How does the Land Cruiser compare to your Defender?

Callum: “They knew how to build a truck back in the day and they are building them even better now. The old school trucks like this HJ60 just keeps going and going and going. And it’s very basic, you know there’s hardly any electrics on it. It’s got a basic four-speed gearbox with low and high range and then you got your locking hubs so it’s very simple. The engine is pretty much bombproof and cast iron so it’s pretty tough and can cope with all the hot climates. If there was a trip to Morocco I would probably take the Land Cruiser instead of the Defender.”

You might be considered a bit of an anomaly: someone who likes both Defenders and Land Cruisers rather than one or the other.

Callum: “Having got both, you realise which one’s good at certain things and which one you would trust to do certain trips. The Land Rover was always first on my list because it was something I always wanted, it was my dream truck. But now I feel like this Land Cruiser has grown on me more and more since I’ve been driving it every day. I’d rather go out at the weekend or go and do the shopping in the HJ60, but for the tough lanes and really gnarly stuff I’d go in the Defender.”

What would you say are the strengths of your HJ60 Land Cruiser?

Callum: “I’d say reliability, I mean it’s very basic and hardly anything to go wrong. The engine and gearbox are very strong with hardly any electronics. You can pretty much fix anything with a spoon – you don’t need any specialist tools, and the engine is very simple in that you don’t have to be very mechanically minded to fix it. Parts are very simple to source if needed. It’s a very old school basic truck.”

Now restrictions are starting to lift, have you got any future trips planned with your HJ60?

Callum: “I’m planning a big trip to Greece for maybe September this year, restrictions allowing. The plan would be to go over for three or four weeks and drive through France and go across Albania, Croatia, get to Greece, and then come back through Italy. Other than that, I have a few weekends planned in the UK. I find that I am away most weekends now going camping with friends. I just love it so much. Everyone works Monday to Friday and you just want to try and escape and enjoy yourself. At the end of the day, it’s just fuel and food, so it doesn’t really cost that much money. So, as long as you’ve got a full tank of fuel, you can do whatever you want, can’t you really?.”

How do you decide when and where to go when planning your overlanding trips?

Callum: “Sometimes it’s planned, and sometimes it’s totally unplanned. It could be Friday night, and you’re sitting there at 6 o’clock in the evening and you go, “I might go camping,” you send a few texts around, or you might arrange something which is months ahead. It’s very flexible, sometimes a big group can go or sometimes I might go by myself. You can go to a wild camping spot and end up pitching up with a complete stranger you’ve never met before and, by the end of the weekend, you’re best mates. Going abroad is the same really, the language barriers aren’t really too much of an issue. If you pull up in your Land Cruiser and they have one too, they might not speak English and you might not speak Spanish or French, but you’ve got this communication with just sign language with the trucks and pointing bits out, crawling underneath, popping the bonnet. The love of camping and the trucks becomes a universal language.”

What is the ultimate aim for you with this HJ60 Land Cruiser: restore it back to original or modify it for overlanding?

Callum: “I think I will try and keep it as retro as possible. I will make a few modifications such as a drawer system in the boot, with a fridge. I need to keep those drinks cold when on my long trips! It would be great to have somewhere designated for utensils and cooking gear as well as a battery system so I can run external lights. I’ll add a winch, sidebars and steps then possibly take the engine and gearbox out as I want to put the 12 HT engine in, which is slightly bigger and comes with a five-speed gearbox. In the future, depending on how long I plan to keep the HJ60 Land Cruiser, I might try and buy an LS3 engine and drop that in. But other than that, I’d keep pretty much everything inside the same, maybe give the radio an upgrade as it currently doesn’t work.”

How did you get into overlanding?

Callum: “It started when I was younger. My dad always had Defenders, which is how I developed my love for trucks. Then I started going off-road occasionally and really enjoyed it, and it spiralled from there. I began learning the green lanes and the byways and the codes, but there’s only so much you can do in the UK, so I wanted to go exploring abroad, and that’s when you start getting into overlanding and buying the different kit that you need and all the different accessories.”

Would you call yourself an ‘overlanding influencer’?

Callum: “Yeah, I would say so. It all started from nothing, and then it’s grown and gradually more and more people like what they see. Other influencers might not be completely honest about certain products or reviews whereas I like to just say it how it is. If it’s not good, it’s not good. I like to put the gear through its paces and be as honest about it as I can. But being an influencer for me personally has been great, growing from nobody to somebody who has been invited to some amazing places like California and Peru for the Dakar rally.”