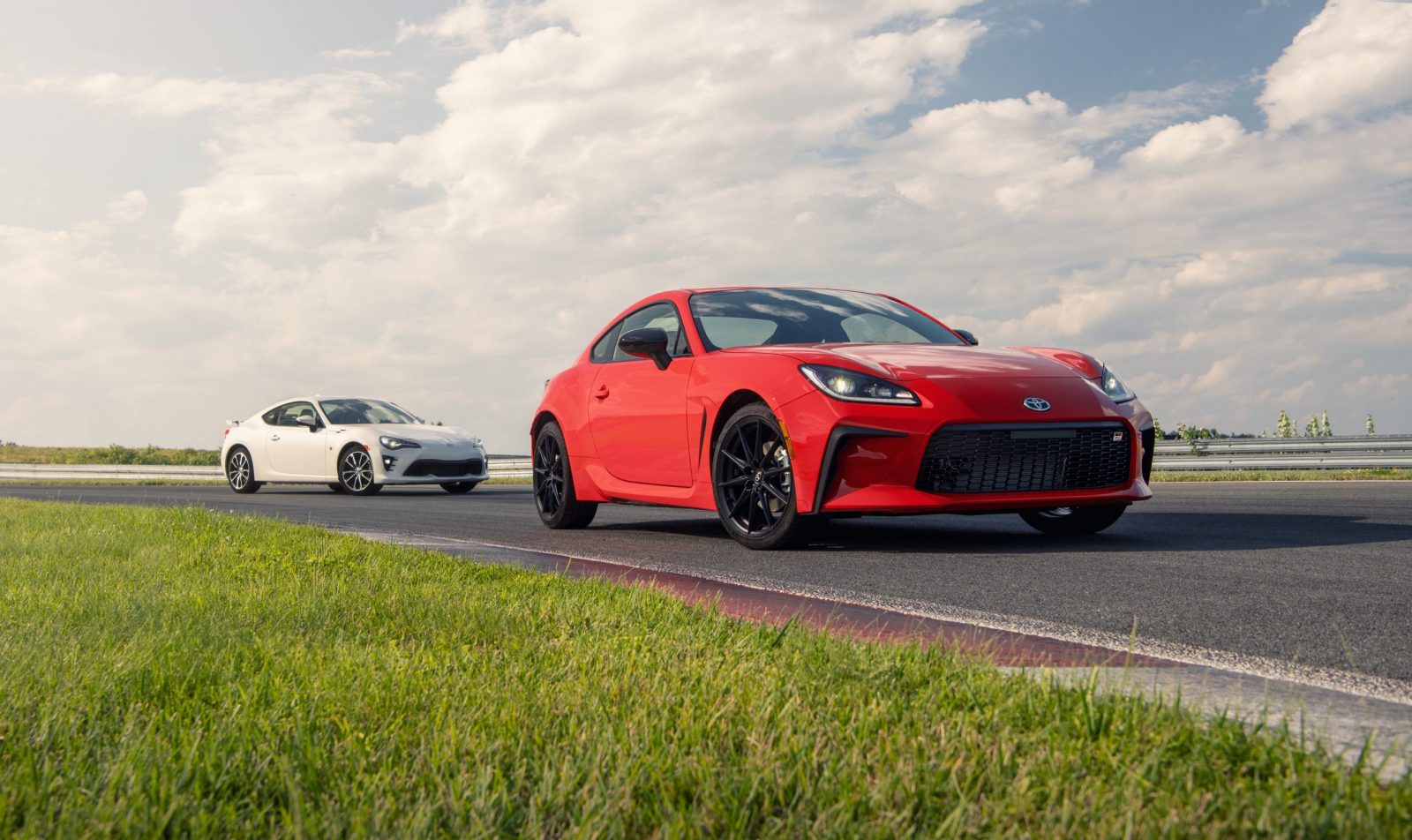 The replacement for the GT86, the GR86 has a more powerful engine than its predecessor (2.4 litres over 2 litres). It also has a far stiffer chassis, making for a more responsive driving experience. Like the GT86, the GR86 has the quintessential hallmarks of a sports coupe – a long, diving bonnet, the front windscreen is raked, and the roof sweeps backwards to meet a dynamically angled rear windscreen. In addition, a range of attention-grabbing design features give the Toyota GR86 a more muscular appearance than the GT86, reflecting its improved performance and handling.

To the side, a sharp crease emerges from the front wheel arch and accelerates rearwards over it, conjuring a touring car aesthetic. An eye-catching highlight forms above the crease, darting all the way to the front door. Together, they provide musculature over the front wheel area, reflecting the responsiveness of the GR86.

Behind the front wheel is a large functional air vent, a reminder that the GR86 has better performance than the GT86 and is designed to be driven hard. The vent connects to a sill that punches outwards just beneath the door shut line, creating a strong highlight. Visually, this highlight lowers the centre of gravity of the GR86, widening the car body, and making the vehicle look stable and athletic. The sill has a sharp crease that creates a shadow beneath it – this contrasts strongly with the highlight, forming a dramatic three-dimensional feature that is far more confident and brawny than the sill of the GT86.

Around the rear wheels, a number of design elements work together, creating a vivid reminder that power is delivered through them. Firstly, the sill rises dramatically behind the door, generating a sense of explosive acceleration. This leads to a haunch that sweeps over the rear wheels. The GR86’s haunch is far more defined than the GT86’s, letting us know that the new model benefits from more power coming through the rear wheels.

The design of the rear again tells a story of a car with greatly increased capability. The spoiler is seamlessly integrated into the boot, emerging from just above the rear lights to accelerate rapidly upwards towards the centre of the car, creating a poised aesthetic. Beneath the edge of the spoiler is a downward-facing surface that reflects the road as the GR86 speeds past, creating vibrant pools of reflection. As well as this, the boot bulges outwards forming strong shadows and a three-dimensional effect, providing the impression that the GR86 is being pushed at great speed from the rear.

The rear lights too have a strong three-dimensional presence and their outmost edges define the sides of the rear end, giving the Toyota GR86 design a commanding stance. Lower down, large twin exhausts are set within a prominent rear diffuser. The diffuser has beefed up ridges designed to accurately direct airflow coming from underneath the car, completing the story of a vehicle with improved power, handling and capability.