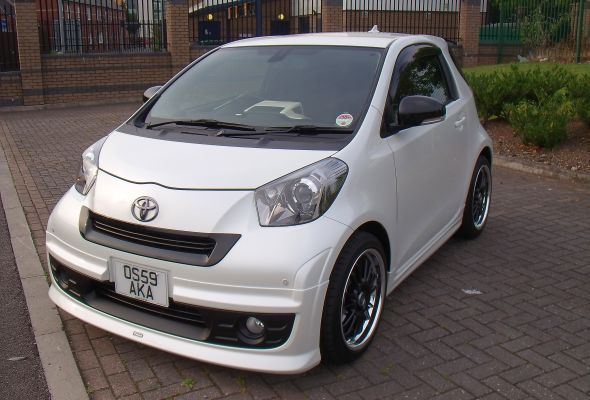 Towards the end of 2013 we published an article entitled Toyota iQ: Have-a-go hero, which highlighted a number of ways that Toyota’s pioneering city car inspired creative thinking among its delighted owners. At the end of that article we put the call out for readers to supply further evidence in support of iQ’s status as a master of diverse disciplines. Among the replies was an email from an independent garage in South Wales called Osaka Toyota Specialists about this interesting modified Toyota iQ.

Inspired by the Osaka team’s annual visits to the Tokyo Auto Salon, its modified Toyota iQ benefits from a number of official and aftermarket accessories originally developed for the Japanese domestic market. All parts had to be privately imported.

From an external perspective, the fitment of official Modellista bumper extensions meant the additional sourcing of a Japanese specification front bumper to cater for the square number plate recess, as well as a centre-exit exhaust system to fill the rear cut-out.

Visual punch is also delivered to the modified Toyota iQ by a set of chunky 17-inch PIAA alloy wheels, snugly housed within the arches thanks to Modellista lowering springs. Meanwhile, the headlights and rear lens units were sent to a specialist in Japan to be separated from their housings and fitted with attractive new ‘angel eye’ and LED components.

Under the modified Toyota iQ’s stubby little bonnet lies a Power Enterprise supercharger conversion, which significantly increases performance by propelling compressed air through the 1.33-litre engine. A commensurate increase in fuel is supplied by new injectors controlled by an additional computer piggybacked into the standard ECU. This combination has made a world of difference to the way speed is piled on through the CVT gearbox to match the revolutions of the engine.

Moving inside, the squeezing effort of the supercharger is monitored through a Defi boost gauge mounted to the left of the instrument cluster. However, its prominence is somewhat diluted by new colour-coordinated trim around the centre console, door pulls, steering wheel and gear shifter. A premier surround sound system and a complement of parking cameras and sensors round out the luxurious interior specification.

So enamoured was the Osaka team with this little modified Toyota iQ that an additional project was undertaken on a Lexus IS, which was also supercharged for improved performance. We’re sure that this brand enthusiasm rubbed off on the company’s clients too.

The details of this article were correct at the time of publication in 2014.