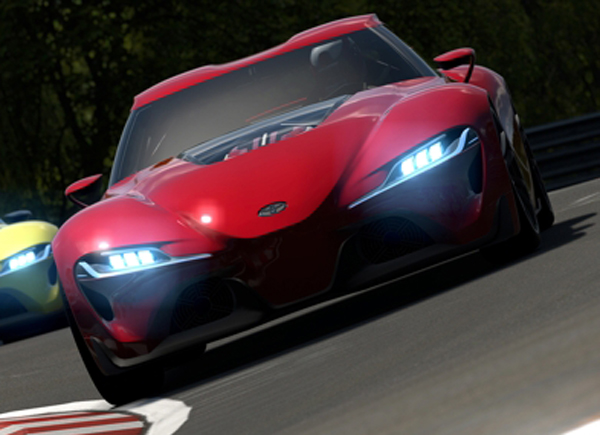 When Toyota took the wraps off its FT-1 sports car concept at the North American International Auto Show in mid-January, two questions were on everyone’s minds: ‘Can I have one?’ and ‘What’s it like to drive?’ The answer to the first question came the following day when a virtual version of the Toyota FT-1 concept was released as downloadable content on the PlayStation 3 driving simulator Gran Turismo 6 (GT6).

As revealed at the unveiling, the FT-1 was born in the virtual world of GT6. Before presenting the concept proposal to Toyota management in Japan, the maker’s Californian Calty Design Research studio collaborated with game developer Polyphony Digital to use the GT6 game environment to digitally render the high-performance FT-1 concept. When Toyota president Akio Toyoda lapped Fuji Speedway in the virtual FT-1 faster than he has lapped the real circuit in his own Lexus LFA, he gave the go-ahead for the real-life FT-1 concept to be built in model form for Detroit.

To find out the answer to the second question – what is it like to drive? – we fired up the Playstation 3 and settled in for an evening of hard driving. After selecting one of nine available body colours, our first in-game look at the car was extremely positive – the bold, aerodynamic design looks amazing as the light is rendered across its curved surfaces, particularly when watching race replays. It is just as impressive inside, where the driver’s view gives gamers a fantastic insight into what it might be like to climb behind the multi-function steering wheel and look through the FT-1’s fighter jet-inspired head-up display.

Obviously there are some aspects of the virtual FT-1 that are firmly in the realms of fantasy. Performance statistics aren’t supplied, and one shouldn’t read too much into the distinct turbo hiss present in the engine note, nor the presence of a boost gauge in the on-screen display. That doesn’t really matter, as the in-game driving experience is totally immersive. There’s no doubting the FT-1’s credentials as a high-performance sports car as you go head-to-head with established, real-world supercars.

The concept’s handling is precise and responsive, and can be set to your personal preference via GT6‘s ‘Garage’ mode, although this is mainly limited to tyre compound and brake adjustments. With a moderate level of traction control enabled, the FT1’s grip levels are phenomenal, with barely any wheelspin from a standing start and very little oversteer for what you judge to be a powerful, rear-wheel drive sports car. Dial the driver aids back a little and the FT-1 becomes more tail-happy, drifting through corners in controllable powerslides in a manner reminiscent of the MkIV Toyota Supra.

As Toyota, particularly through its TRD racing division, has a wealth of experience in aerodynamic design and Polyphony is a master at rendering the physics of real cars in a digital environment, the collaboration has produced a realistic and thoroughly convincing representation of how the Toyota FT-1 might look, sound and feel. Calty’s ‘function sculpting’ design taps into Toyota’s racing heritage to give the FT-1 excellent aerodynamic stability, aided by a retractable rear wing that increases downforce at speed and stability under braking – keep an eye out for that in the replays.

All of Toyota’s rich sports car heritage, from the 1967 2000GT through the Celica and Supra to the current GT86, can be enjoyed in the simulated world of GT6, and the virtual FT-1 concept provides a glimpse of what the future may hold for Toyota’s high-performance sports cars. If you want to experience it for yourself, the Toyota FT-1 is a free download for GT6 until Tuesday, February 11th if you receive bronze or better in the FT-1 seasonal challenge at Laguna Seca, or you can purchase the FT-1 at the in-game Toyota dealership.

To see the high resolution FT-1 image gallery, head over to the Toyota UK Facebook page, or to view players’ in-game images of the FT-1 in Gran Turismo 6, visit Flickr. And if you’ve taken your own in-game shots of the Toyota FT-1, please share them with us on Facebook, Twitter , or Google+.

To stay up-to-date with all the information about the FT-1 sports car concept, visit our Toyota FT-1 information hub.