Skip to content
Home Garage and Track Can you drive to see the Northern Lights in Norway? 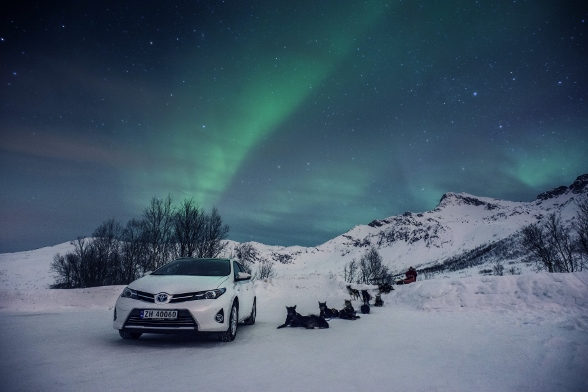 As a motoring journalist I often get to visit some cool places, but this trip with Toyota is pretty special, writes journalist Martyn Collins. In temperatures as low as -24C, I’m here to chase the Northern Lights in Norway in a Toyota Auris Hybrid Touring Sports, with a Land Cruiser as our support car.

We’re in Tromso, the largest city in the Arctic Circle and previously known as the Paris of the North. It also happens to be right slap bang in the middle of the Aurora Borealis zone and apparently, it is one of the key places to observe the spectacular light show otherwise known as the Northern Lights between September and April.

To make sure we get a prime view of the Northern Lights in Norway and bag the best pictures, we hire a local guide who turns out to be the human equivalent of a Swiss Army Knife.

On top of being an army reservist, Jan Erik is also an adventurer and builder. Thankfully, he has already marked out our route, taking us through this stark but beautiful landscape. With exception of the stunning starlit sky, it is pitch black and deathly quiet – it feels like we’re the only people on earth.

We’re heading out in the Auris along icy roads, visiting a number of the surrounding towns including Kattifjorddeidet, Grotfjord, Vasstrand and Sjurnes and I’m interested to know how the Toyota will deal with this extreme weather.

We’ve got the climate control and seat heaters working overtime, given we’re experiencing temperatures as low as -24C, and I’m relieved to say the Auris’s interior is warm and snug. The only obvious change to the Auris’s refined drive is a noticeably harder ride, the result of the non-standard studded snow tyres on the ice-covered roads.

Magical is the best way to describe the first time we spot the amazing curve of the eerie, transparent green of the Northern Lights, as it cuts the outline of the mountains in half. I feel very privileged to have the chance to see what has to be one of the great wonders of the world.

Considering the cold, the Auris Hybrid Touring Sports’ performance seems unchanged. Even in these Arctic temperatures, the fuel-sipping hybrid technology still delivers fuel consumption of 5.3l/100km, which is around 53mpg.

No surprise then that despite the cold, Toyota’s Hybrid models accounts for half of all its sales in Norway – although off-roaders, like our Land Cruiser, are still king in the most northerly areas such as Tromso.

So it’s time to switch cars and into the Land Cruiser. The 4×4 seems huge after its small-family brother, but it is no harder to drive even if the studded snow tyres make the steering overlight and lacking in feel. The Land Cruiser’s separate chassis and live rear axle equals unstoppable agility off-road that the Auris just can’t match.

Performance from the 3.0-litre D-4D engine with the automatic gearbox is more than adequate both on and off-road, but it likes to be revved to give its best and is a reasonably refined cruiser. Even with ice forming on the inside of the Land Cruiser’s windows, the heat kicked out by the climate control and heated seats is enough to keep things comfortable.

Two days and three nights later, we’re coming to the end of our Norwegian experience. Chasing the Northern Lights has been an amazing adventure and we couldn’t have chosen two more diverse Toyotas to do it in. Both the Auris and Land Cruiser have their different strengths. The Auris is an efficient and comfortable drive, while the Land Cruiser is more than capable off-road and together they make a formidable team.

To discover more about the Toyota range, click here.