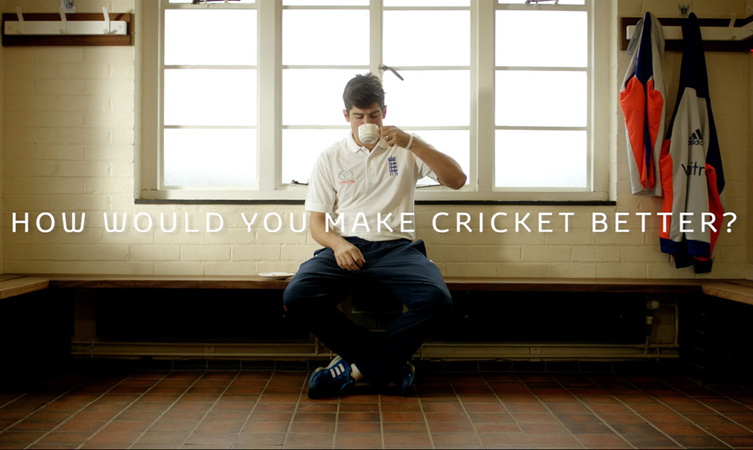 Cricket fans are being asked how they think cricket could be made better, with the best cricketing innovation in with a chance of winning a brilliant prize package. Toyota and the England and Wales Cricket Board are turning to the game’s supporters and players in the second phase of their Future of Cricket project, having been given some inspirational tips by younger fans and players last year.

The rewards for the person who comes up with best idea will include a cricket bat signed by members of the England team, a pair of tickets for England’s Royal London One Day International against Pakistan on 4 September and the chance to meet one of England’s international squad members*.

They will also have the chance to be involved with Toyota and the ECB in exploring how their idea might potentially be put into practice in the game.

The shout-out has been launched today with a video featuring Test skipper Alastair Cook and his fellow England stars Jonny Bairstow and Mark Wood, together with some members of the grassroots game. They talk about some of their own innovative ideas for making the game better, such as rotating cricket grounds for varied spectator views, balls that release a puff of chalk during training to help kids judge line and length and sound effects broadcast for fours and sixes: ‘Zap!’ or ‘Shazam!’

Alastair Cook said: “Last year we had some fantastic ideas from the kids, now we want the rest of you to let us know how we could make cricket better. My own idea is to have a ‘Snick’ machine that aids training by replicating the angles the ball flies off the bat to the slip catchers.”

“When we are playing, the crowds give us great inspiration and they are never slow in letting us know what they think. We want them to share their innovative ideas to improve the game we love.”

Toyota, the official vehicle partner to the ECB, has launched a digital hub for people to contribute their ideas at toyota.co.uk/bettercricket. Entries can also be made on Twitter by tweeting ideas using #bettercricket.

Entries will be accepted up to 16 June, after which a panel of independent judges will choose the three they consider to be the best. These will then be put to a public vote to determine the overall winner.

Toyota spokesman Stuart Sanders said: “Our Future of Cricket campaign has already produced some amazing contributions from children learning to play cricket through the Chance to Shine charity. Now we want the rest of the countries fans and players to have their say and potentially see their cricketing innovation benefit the game in the future.”