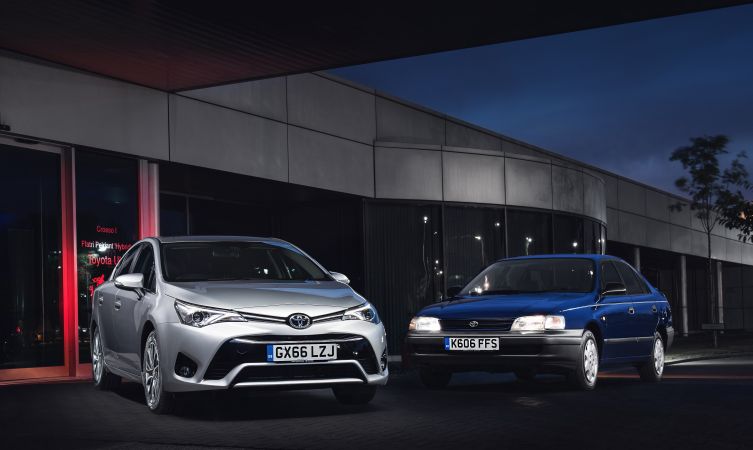 The first British-built Toyota Carina E rolled off the production line in Burnaston, Derbyshire, on 16 December 1992. And it was powered by a world-leading 1.6-litre petrol engine manufactured in Toyota’s similarly new engine plant in Deeside, North Wales. It means that this year, Toyota Motor Manufacturing UK Ltd (TMUK) celebrates 25 years of vehicle production.

The line-off ceremony was attended by Toyota’s then chairman, Dr Shoichiro Toyoda (above left), and all 1,143 members of the Burnaston workforce. It marked the culmination of an initial investment of £840 million and 100 man-years of personnel training across three continents. Ongoing investment in the two sites currently totals £2.5 billion, with TMUK being additionally entrusted as the first manufacturing company outside of Japan to build hybrid Toyota models.

Landmark anniversaries like this do not come around every year, and we felt this one deserved a celebration. So we devised a special road trip that connected Toyota’s Burnaston and Deeside plants using two models produced 25 years and four million vehicles apart: the pristine, original Carina E from our heritage fleet and its modern counterpart, the latest Avensis saloon in tempting Business Edition trim.

Would nostalgia for the analogue experience delivered by the Carina E triumph over the modern sophistication of today’s Avensis? We couldn’t wait to find out.

The spacious reception area at Burnaston marks the public entry to an immense, 580-acre site that encompasses stamping, welding, painting and plastic moulding facilities – in addition to final assembly, of course. Walking through the rotating doors you are greeted by two examples of the factory’s latest products – Auris and Avensis – as well as reminders of its numerous manufacturing awards.

Buried beneath the granite floor is a time capsule

But it is also worth looking down, because buried beneath the polished granite floor in front of the reception desk is a time capsule. Placed there to commemorate the ‘ground breaking’ first day of construction in the summer of 1990, the hatch will not be lifted and the contents of the capsule will not be revealed until 4 June 2090.

Patience is known to be a virtue but most of us will experience longevity issues before 2090, so we decided to create our own kind of time capsule by concealing a collection of six 25-year-old things within this photoset. How many can you identify throughout the feature?

The answers are listed at the bottom of the page. And who knows whether some of them will also appear in Burnaston’s time capsule…

25 years of TMUK: Burnaston to Deeside

Firing up the Carina E and Avensis to head west to Deeside, it struck us as to why we needed to jump in the cars at all. Why did Toyota decide to build two separate plants almost one hundred miles apart when the size and infrastructure of the immediate vicinity around Burnaston was already ideal for vehicle manufacturing?

Why did Toyota decide to build two separate plants?

The answer lies in forward thinking. In the short-term it would indeed have been easier if the two facilities had been placed side-by-side. But if this option had been chosen, Burnaston’s long-term capacity would have been compromised and the opportunity for both plants to expand in the future would have been severely restricted.

Instead, based on projected growth and the potential for further expansion, Toyota had been manoeuvring its operations to swiftly accelerate UK vehicle production from an initial rate of around 35,000 units a year towards Burnaston’s production capacity of 200,000 units. This increase would have been impossible from one central site, but it also opened the possibility of enjoying a pleasant blast along the fast-flowing, rarely interrupted dual carriageways and motorways to Flintshire.

Tempting as it is to exit the Toyota roundabout and head towards Alton Towers, the busy A50 points you in the correct direction. The road thunders along to the tune of countless juggernauts, some of which will be heading to Burnaston to meet a precise delivery slot in line with Toyota’s Just-In-Time production philosophy.

Approach the route with the mindset of getting it over and done with and you can arrive at the Deeside plant in less than two hours. This is usually the sort of in-a-rush route a modern satnav system will suggest. But after stopping at Keele Services on the M6 to consult a good old-fashioned printed map we thought it better to escape the superhighway and take in a more sinuous trail shadowing the Trent and Mersey Canal – the UK’s first long-distance canal route – and the charmingly rural Shropshire Union Canal.

Exiting on to the A500 provides an entry into Cheshire, where the gently rolling landscape skirting Shavington allowed us to cruise along on just a tickle of throttle. Without the need to shield out tyre roar from the motorway, it felt like the right time to activate the Carina E’s air conditioning system by winding down the window.

What a revelation! Unlimited fresh air, a perfectly placed elbow rest, and zero buffeting. It’s not the same in modern cars like the Avensis, which prefer to cocoon occupants in an artificially controlled climate.

Everything about our Carina E is manual. There is no ABS on this model and no automatic station retuning on the radio; you need to listen to the engine to know when to change gear and you have to reach across the car to adjust the nearside door mirror. At first, you welcome the simplicity, taking comfort in the fact that there is nothing to go wrong.

But then you begin to realise what you’re missing. In terms of driving feel, the steering of the Avensis is weighty and communicative, the cornering flat and composed and there is an abundance of lateral grip.

Meanwhile, refrigerated air emasculates the heat of the sun and the cockpit provides as much relief from the hubbub of life as the digital detox enforced by the Carina E. Multiple connectivity options mean you can choose your own music instead of enduring the inane chatter of daytime radio DJs.

Heading along the great Cheshire plain you notice the A51, Shropshire Union Canal and the high-speed London to Holyhead train line converging in Caveley, one of the primary production centres for Cheshire cheese. Turophiles may want to stop off for samples but we were on the home stretch, heading for Chester and the North Wales Expressway.

For those used to arriving in Wales via the majesty – and expense – of the Severn Bridge, the border dissecting the A55 is easy to miss. However, those after a bridge experience do not have to wait long as there are a couple of choices when it comes to crossing the River Dee.

Heavy haulage flowing through Queensferry is forced to use the nondescript crossing on the A494, whereas smaller vehicles can also access the bascule-type Jubilee Bridge on the Wales Coast Path, its bright blue cat’s cradle of supporting metalwork providing a more fitting entrance to Deeside’s industrial quarter.

From the western shore of the Dee Estuary at Connah’s Quay you get a grandstand view of the industrial park where Toyota’s Deeside plant resides. It’s hard to believe that 300 years ago the whole area was under water: the opposite shore was four miles away and Chester was one of the UK’s busiest ports. But when the main channel started to silt up, trade shifted to Liverpool, which allowed the broad waterway to be reclaimed for industry and agriculture.

Since then the area has transformed itself into a powerhouse of engineering and manufacturing talent, encompassing industries as varied as steel, aviation and motor vehicle engines. But while engine manufacturing brings to mind heavy-duty processes such as casting and machining – both of which are carried out on-site at Deeside – the Toyota plant also enjoys global status as a standard-setter in environmental methods.

Right from its inauguration in 1992, Deeside has delivered world-leading production engine technology. The 1.6-litre 4A-FE petrol engine in our Carina E is a prime example of this fact. In city driving and at speeds up to 87mph, the special lean-burn system can function at a remarkably lean air-fuel ratio of up to 23:1 – a significant improvement on the traditional combustion mixture of 14.7:1. This goes a long way to understanding the sentiment behind Toyota’s contemporary catchphrase, The Car In Front Is a Toyota.

Five million engines later and Deeside remains at the cutting-edge of engine manufacturing methods and technology. As well as producing all petrol engines and petrol-electric hybrid units (as above) for vehicles coming out of its sister site at Burnaston, Deeside also produces the latest generation petrol-electric hybrid engine for the Toyota C-HR.

Our after-hours arrival at Deeside had been arranged with security in order for us to get access to the factory’s entranceway for our concluding photography. Like Burnaston, this public area offers little outward indication of the high-tech goings-on inside. The only clue is some bright red lettering on the glass proclaiming it to be a Hybrid Engine Plant.

Bathed in artificial light for these images, the Avensis looks incredibly sophisticated and heavily sculptured compared to the gentle, rolling curves of the Carina E. Only now, under such intense scrutiny, does the Carina E begin to look its age.

Such is the charm of the older Toyota, however, that this was the car people wanted to talk about. One individual even made the effort to communicate across a crowded dual-carriageway to enquire if it was for sale. Our reply: ‘Sorry, this one’s a keeper.’

Did you spot all six items inspired by things that are 25 years old this year? We suspect you might have spotted five of them – the Wayne’s World baseball cap, the Aladdin movie on VHS, the Euro Disney guide book, the Super Mario Kart T-shirt and even the pop star Selena Gomez.

The sixth item is more tricky to identify, although evidence of it has been staring at you all along. It’s the familiar JPEG file format that compresses and codes digital images so they can come alive on screen. Just like the Carina E, it, too, was first introduced in 1992.