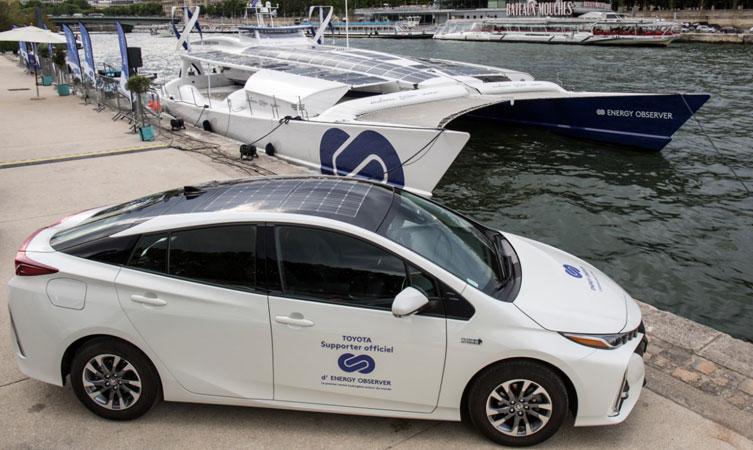 Toyota’s mission to help build a future hydrogen society has taken to the waves with support for a ground-breaking journey by Energy Observer, a boat which aims to become the first to produce its own hydrogen fuel while at sea and in harbour. The ship will act as a floating smart grid system, drawing power directly from nature in the form of solar, wind and wave energy.

The experimental science vessel has embarked on a six-year journey that will see it visiting 101 ports in 50 different countries. The project is supported by Toyota France, which has provided the team with two Mirai fuel cell saloons and six Toyota hybrid cars.

Victorien Erussard, Captain of the Energy Observer, said: “We are very happy to have Toyota, a leader in hybrid and hydrogen, as our official supporter. Toyota carries the same drive to fight global warming and air pollution. The goal of Energy Observer is to unite all natural energies, but also the ones of our society. We want the expertise of companies such as Toyota, as well as laboratories, start-ups and institutions united around our boat.”

Didier Gambert, President of Toyota France, said: “We are proud to be part of such an ambitious project for the good of our planet. It shares the same ecological values and eagerness for energetic transition as exemplified by the Toyota Environmental Challenge 2050.”

This initiative is led by Erussard, an offshore sea racer and Merchant Navy Officer, and Jérôme Delafosse, an explorer and documentary director. It is sponsored by Nicolas Hulot, French Minister of “Transition Ecologique et Solidaire”, and Florence Lambert, Director of CEA-Liten*.The team is determined to create a tightly-knit community engaged in contributing to a sustainable future.

The Energy Observer is due to visit Cherbourg from 26 August to 3 September and Nantes from 9 to 17 September. It will then travel around the Mediterranean before heading for northern European and the next leg of its journey.