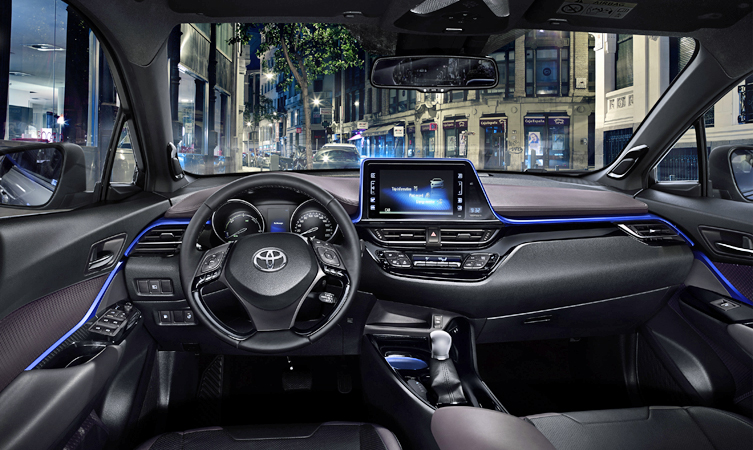 The Toyota C-HR (coupe-high-rider) is designed to stand out within both the Toyota line-up and its market segment, and represents Toyota President Akio Toyoda’s determination to allow greater stylistic freedom and promote engineering creativity that will deliver eye-catching designs and enhanced driving pleasure.

The Toyota C-HR remains remarkably true to the general features of the concept cars that attracted so much public attention in Paris in 2014 and in Frankfurt in 2015. Its coupe-like lines are testimony to its designers’ resolve to create a style that stands out in the Toyota range, and to establish a new direction among mid-sized crossovers.

If you want to find out more about the Toyota C-HR, sign up to our latest news alerts

Toyota is targeting a clear and singular customer profile: people whose decisions are mainly based on emotional considerations, who want individuality and to be the first to try new experiences and products. Style and quality are essential in any purchase they make, and their car represents an extension of their personality.

Inspired by what he learned from meeting these customers, C-HR Chief Engineer Hiroyuki Koba focused on their requirements throughout the development process, setting high demands for design and perceived quality.

The Toyota C-HR’s unique character demonstrates the flexibility that the TNGA (Toyota New Global Architecture) gives to vehicle developers in the three key areas of design, powertrain and dynamics, enabling them to deliver a new and fresh take on the increasingly commoditised crossover segment.

A new departure for Toyota, the interior styling represents a new ‘Sensual Tech’ design concept combining high-tech functionality with a sensual and fashionable style. It is interpreted in a driver-focused area that forms part of an airy, expansive cabin.

The interior’s warm, welcoming ambience is created by the seamless layered architecture of the instrument panel, which flows through to the door trim and features stylish ornamentation and a piano black panel. It offers a contrast between sensual surfacing and crisp lines to create a fresh, comfortable environment.

The area around the driver incorporates innovative details and intuitive, user-friendly high technology. All the switchgear and the eight-inch display touch-screen for the Toyota Touch 2 multimedia system are slightly oriented towards the driver.

In conjunction with the asymmetrical centre console design, this brings all controls within easy reach of the driver, while still giving the front passenger access to relevant controls.

Because the touch-screen stands proud of the instrument panel rather than being enclosed by it, the depth of the upper dashboard is kept low, helping maintain good forward vision for the driver.

A new, two-tiered front seat design combines a slender, sporting upper section with a more strongly bolstered and supportive lower area. This novel approach is emphasised by the use of differing tones, textures and patterns within the upholstery design.

The Toyota C-HR’s interior represents the earliest involvement yet of the company’s European SQ team in the design process. Their work targeted class-leading sensory quality, in the knowledge that Toyota C-HR customers will also be considering models from competitor premium brands.

Working closely with the headquarters design team to maintain the original interior styling concept, the team focused on component quality and the consistency of grain, texture, shape, colour and illumination in every element, even the stitch groove radii of the seats.

Many switches use a similar shape, reflecting the diamond motif of the exterior body shell and reinforcing the link between the interior and exterior design. The same diamond theme is also evident in the door trim pattern, the headliner, the JBL audio speaker grilles and tweeter shape and even the needles of the driver’s analogue instrument dials.

A carefully considered choice of finishes is central to achieving the harmonious, consistent, one-piece look of the interior. There are three main surface finishes: leather-like for all background surfaces; a smooth Nappa grain for all touch surfaces; and technical grain for all functional elements, such as switchgear.

Decorative elements are finished in high quality piano black and satin silver trim, and the clear blue instrument and switchgear illumination has been fine-tuned to ensure consistency of hue, even on adjacent reflective surfaces of different colours.

Within the C-HR range, the interior will be available in a choice of three colour schemes: Dark Grey, Black/Blue and Black/Brown, depending on specification and grade chosen.

A new design direction for the crossover segment

The production vehicle remains true to the concept car’s exterior which was first shown at the Paris motor show in 2014, and which registered extremely well with target customers. It measures 4,360mm long, 1,795mm wide and 1,555mm high (hybrid version) and has a 2,640mm wheelbase.

Developed under the concept of “Sensual Speed-Cross”, it features a diamond architectural theme, with prominent wheel arches, emphasising strength and rigidity. The modulated structure combines a powerful lower body and raised ground clearance with the slim and sleek cabin profile of a coupe.

Viewed from any angle, the C-HR’s combination of faceted, gemstone-like shapes with fluid surfaces and elegantly integrated detailing creates a delicate balance of precision and sensory appeal.

The front represents a further development of Toyota’s contemporary design identity. The slender upper grille flows from the Toyota badge into the wing extremities of the headlamp clusters and wraps fully around the vehicle’s front corners.

The movement of the blacked out rocker panel towards the front and rear wheels, along with the shoulder axis that runs through to the front and rear, emphasises the fast-looking, ‘lift-up’ feel of the lean body.

The C-HR’s coupe-like styling is further expressed in rear door handles that are integrated in the rear pillar and, essential to the representation of speed in the design, the powerful projection of the sweeping roofline into a large, aerodynamic, skeleton-frame rear spoiler.

To the rear, the strongly tapered cabin culminates in a top-hinged tailgate, which contrasts with the pronounced flaring of the wheel arches that gives the vehicle a wide and powerful stance.

Prominent rear light clusters stand proud of the body and (on higher grade models) are equipped with LED lamp technology to give the rear view of the C-HR an equally expressive visual signature.

Equipment levels to suit the most demanding customers

The Toyota C-HR can be equipped with a wide variety of features, tailored to reflect the priorities of its target customers.

Because various elements of the interior such as the windows, sunroof and upholstery, as well as the rigidity of the body structure surrounding each speaker, can have a significant impact on sound quality, the system’s development has benefited from close collaboration between JBL and Toyota’s engineers from early in the design process.

The system’s design took into account in-depth customer analysis, which helped determine orientation of the speaker layout in the front cabin and the use of a precisely integrated, front pillar-mounted horn tweeter (a signature JBL system feature) to deliver crisp, clear sound.

As well the two 25mm horn tweeters and acoustic wave guides, the system also features two 80mm wide-dispersion units and two 17cm sub-woofers in the front of the vehicle, and, in the rear, two 15cm full-range speakers and a 19cm sub-woofer in a dedicated, 10-litre, ported enclosure.

A JBL premium audio package with lossless audio encoding is available, in combination with the Toyota Touch 2 with Go navigation system. The partnership between Toyota and JBL has been expanding successfully since its was formed in 1996. Trusted by music professionals, JBL audio systems are used in major concert halls, venues and stadiums throughout the world (80 per cent of live concerts, 70 per cent of all recording studios and 90 per cent of all THX-certified cinemas).

Quality is the common focus of both companies, which has resulted in the all-new, uncompromised premium audio system specifically tailored for the C-HR.

The Toyota C-HR is equipped with an engine range designed to deliver exactly the fluent, engaging driving behaviour its customers are looking for. This is most powerfully expressed by the segment-unique, range-topping, full hybrid version, the intrinsic characteristics of which guarantee a smooth ride.

Fitted with the latest-generation hybrid power plant, the C-HR generates CO2 emissions from as low as 85g/km, a figure unrivalled within its segment. The official combined cycle fuel consumption figure is from 76.3mpg.

The 120bhp (90kW) hybrid powertrain is not only more efficient and lighter than Toyota’s previous generation system, but also offers sharper performance. Detailed design changes to the engine have resulted in a thermal efficiency of 40 per cent, world-beating performance for a petrol unit.

Other hybrid system components have been made lighter and smaller, and have been repositioned for improved packaging, contributing to the car’s low centre of gravity.

The C-HR is also available with the 1.2-litre turbo petrol engine which debuted in the Auris range last year. Delivering 114bhp (85kW) 185Nm of torque, this unit generates CO2 emissions from 135g/km. MPG figures will be released later. It may be mated to either a six-speed manual gearbox or a Continuously Variable Transmission. CVT versions are available with either front or all-wheel drive.