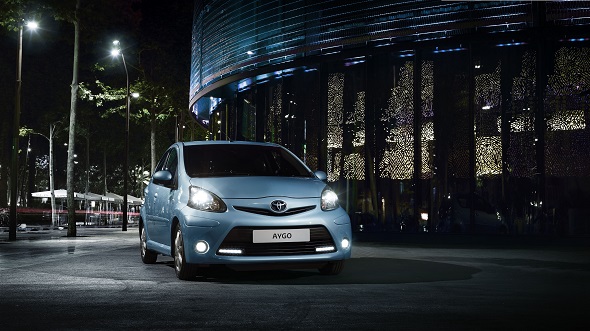 The Toyota Aygo is a compact and stylish city car that’s as capable around town as it is on the open road. It’s available in three- and five-door versions both of which offer buyers a strong blend of practicality and visual appeal. Available in six ascending model grades – Active, Active Plus, Mode,  Move, Mode with Air Con, and Move with Style – the Aygo is small and fun, with an economical 1.0-litre engine achieving 65.7mpg (manual models). It’s a bargain too – the Toyota Aygo is priced from just £7,995, attracts little or no road tax costs, and scheduled servicing is as little as £99 at Toyota Centres.

DRIVING
Toyota keeps things simple with the Aygo, equipping all models with an economical 1.0-litre VVT-i engine paired with a standard five-speed manual or optional MultiMode gearbox. The five-speed MultiMode (five-door models only) functions like an automatic gearbox, but the driver can also choose to select gears manually. The Aygo is a nippy performer at urban speeds thanks to the low-end torque from its three-cylinder engine, and is stable and responsive at high speeds thanks to its suspension design and speed-sensitive Electric Power Steering (EPS). EPS also makes it very easy to park in the smallest spaces and navigate the tightest of city street corners.

COMFORT
Because of its clever wheel-at-each-corner design, the Toyota Aygo is a surprisingly roomy car – the passenger cabin can seat four adults comfortably, even those over six feet tall, despite Aygo only measuring 3.4m in length. All six trim levels are well-equipped as standard, with air conditioning as standard on Move, Mode with Air Con and Move with Style models (optional on Active Plus). It is wide and light inside with innovative positioning of the instrument panel on the adjustable steering column so that it is easily seen by all drivers. Whether you choose the three- or five-door Toyota Aygo, the doors have been designed to give easy entry and exit from the front and rear seats.

PRACTICALITY
The Toyota Aygo makes the best possible use of its compact dimensions, making it the perfect choice for an urban runabout. It has 139 litres of luggage space in the boot, and an extra 25 litres of storage from a variety of pockets, trays and holders in the cabin. Updates in 2013 added 50:50 split rear seats to all trim levels from Active Plus upwards, making the Toyota Aygo even more useful.

SAFETY
Safety is of great importance to Toyota, so all Toyota Aygo models feature a strong, crash-resistant body structure and are fitted with several safety technologies. These include six airbags, a stability control system to prevent skidding on slippery surfaces, and anti-lock braking with the supplementary Electronic Brakeforce Distribution system to prevent Aygo’s wheels from locking under heavy braking.

RUNNING COSTS*
Cars don’t get much cheaper to run than the Toyota Aygo. Its 1.0-litre VVT-i engine is very economical, returning 65.7mpg on manual models and 62.7mpg for MultiMode automated manual models (combined cycle). The engine is incredibly low in emissions too, meaning that tax rates are correspondingly low – manual models qualify for zero annual road tax, and Aygo models with MultiMode transmission get the first year’s tax for free and will only cost £20 a year thereafter. Scheduled servicing costs as little as £99 at Toyota Centres, and is only necessary once a year or every 10,000 miles.

QUALITY
The Toyota Aygo is cheap to run and affordable to buy, but that doesn’t mean it skimps on quality. Rather, Toyota’s confidence in Aygo’s build quality is reflected in its five-year/100,000-mile mechanical warranty and three-year unlimited mileage warranty against rust and paint defects. The body is also protected by a 12-year unlimited mileage anti-corrosion warranty.

PRICES*
The Toyota Aygo is sold in six different trim levels, each one available as a three- or five-door body style. Prices range from a promotional £7,995 (usually £8,700 OTR) for the three-door Active model (manual) to £10,720 for the three-door Move with Style model. Five-door models are £400 more expensive, and the addition of the MultiMode transmission costs an extra £500 (five-door models only). Lastly, air-conditioning is available as a £500 option on Active Plus models, and included as standard equipment on Mode with Air Con, Move and Move with Style models.

Further information on the Aygo range is available on the Toyota UK website.

*Prices correct at time of publication