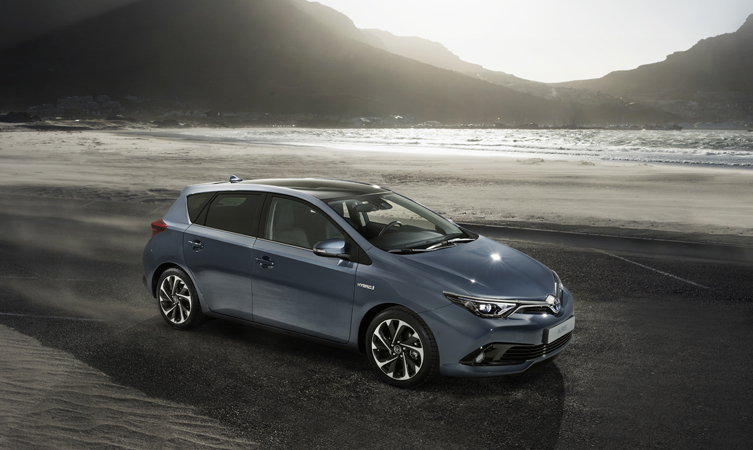 The 2015 Toyota Auris has been comprehensively redesigned front and rear, to give the vehicle the visual impression of a broader stance and lower centre gravity, and a more prestigious, sophisticated road presence.

At the front, a pair of chrome wings emerges from a new, more prominent Toyota emblem.

The powerful upper wings underscore the front lip of the bonnet, running the full width of the car. The lower wings are less prominent and sweep down into the upper surface of the bumper, holding the sharply angled inside edge of ne LED headlamp clusters, which include LED daytime running lights.

LED lamps have many advantages over conventional bulbs: the light they produce is closest to daylight (on the Kelvin scale); they use less energy; and they have a service life of up to 100,000 hours – almost the same as the vehicle itself.

The lower grille, set beneath a more prominent front bumper, now runs the full width of the car. It has a narrow centre section, underscored by a chrome accent on the lip spoiler, which widens into deep pods which house integrated fog lights, at the furthest edges of the new design.

In profile the new front and rear styling generate longer overhangs, improving the overall balance of the design and leading the eye in a sweeping line from the front Toyota emblem to the rear lamp cluster. A new shark fin roof antenna and 16 and 17-inch alloy wheel designs add further impact.

To the rear, the lower half of the car has been completely redesigned, again to add visual emphasis to the vehicle’s broad stance. The width of the deeper, more muscular bumper design is amplified by the location of reflector lamp housings at the furthest edges and by a thin chrome trim line.

The rear lamp clusters use LED light guide technology, giving Auris its own, distinctive lighting signature.
New exterior colours will be added to the range available for Auris.

The sensory quality of new Auris’s cabin has been raised with a reduction in the visual mass of the dashboard design, cleaner integration of the instrumentation (with more uniform illumination) and a more consistent shape and finish to grained surfaces and trim elements.

The driver’s instrument binnacle has a stronger, more sporting design with tubed tachometer and speedometer dials either side of a new 4.2-inch colour TFT multi-information screen.

The centre stack instrumentation is set within a more curvaceous dashboard. It has been integrated into a single, smooth surface, incorporating touch-sensitive switchgear with more consistent back-lighting. The dashboard’s upper surface and fascia are finished in the same soft-touch material, with a consistent grain pattern.

Many details, such as the air vents, doorhandles and gear lever surround, have been redesigned to give a crisper, high-quality appearance. The shape and finish of chrome trim features have been harmonised and new set upholstery designs complete the more premium quality cabin environment.