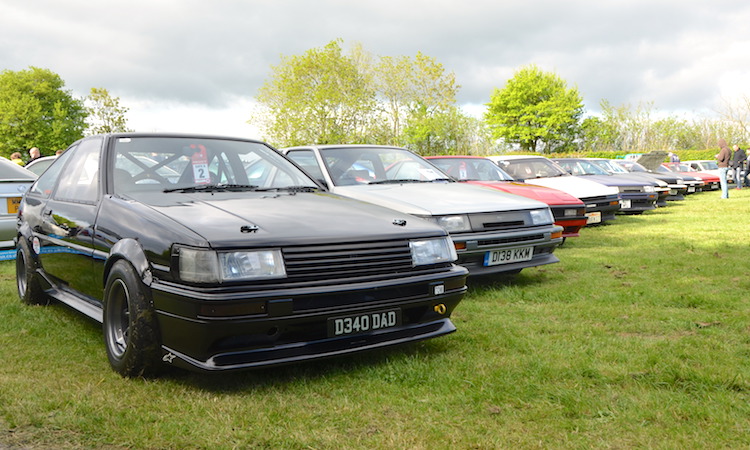 Toyota enthusiasts put in a strong showing at Japfest, Europe’s biggest Japanese car show, bringing together a mass showing of Toyota cars past and present – including one of the largest recent UK gatherings of AE86 Corolla GT Coupé models we’re aware of.

Thousands of Toyota owners, fans and members of clubs and online communities made the trip from across the UK – and even further afield – to the Castle Combe circuit in Wiltshire last Saturday for a one-day celebration of all things JDM.

An impressive 13 Toyota AE86s – including our own AE86 Levin model – were displayed on the stand shared by the GT86 Driver’s Club and the Corolla Brotherhood.

We added to the stand’s ‘new and old’ Hachi-Roku theme by taking a brand new Toyota GT86 Aero along too, which sat alongside 44 other GT86s ranging from standard-spec cars to some very highly modified examples, many of which took advantage of the event’s public track sessions and delighted the thousands of spectators who attended.

Other Toyota clubs in attendance included GT4OC – the Celica GT-FOUR owners’ club, MR2 owner’s clubs MR2OC, IMOC, and 2Brutal, UK Starlet Owners, YarisclubUK and many more. The ever-popular Toyota Supra was a common sight at Japfest, reflecting its long-held position as one of the premier choices of modifiers and fans of classic Japanese sports cars.

“It was great to have the Corolla Brotherhood along and it added a unique New & Old element to our stand. To have so many iconic cars in one place was a sight indeed. It was a fantastic day out with what can only be described as a close knit family of friends and enthusiasts.”

Take a look at some of the videos from Japfest below – or view more images on our Flickr.