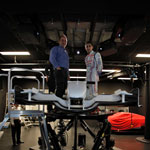 It looks like the world’s biggest and best arcade racing game, but don’t let the people from Toyota Motorsports hear you say it.

Suspended on six vast hydraulic rams sits a Toyota Formula 1 monocoque, the platform for what is one of the most sophisticated race car simulators in the world.

To them this is no game, but a deadly serious weapon in the fight to win this year’s World Endurance Championship.

Featuring a 200 degree screen, with pin sharp 1400 x 1040dpi resolution, the platform can not only move forwards, backwards, up or down by 0.6 metres, it can roll, pitch and yaw too, mimicking every move a race car can make. It reacts to each input in 4/100th of a second which, if you’re driving, feels as good as instant.

The Driving Simulator, or “Sim” as everyone calls it, has two distinct purposes. Perhaps surprisingly, its less important use is to allow drivers to learn cars and circuits without leaving the building.

Currently it has 19 laser-mapped tracks from around the world in its databanks. Developed by Toyota’s team of driving professionals, tracks are replicated with forensic accuracy – right down to the road surface and tree types.

One of the developers is 24 year old Red Bull F1 test driver and Toyota TS030 driver, Sebastien Buemi – who is here to show me how it works. Thanks to the Sim, at Le Mans last year he was third fastest in the first practice session having never visited the track before.

Its core function is to make the Toyota’s TS030 racing car faster. You can feed it wind tunnel data, the Sim will alter the car’s behaviour accordingly and the team can tell if the modification has been successful or not. No other sports car team has its own Sim while even in F1 all bar the top teams need to rent time in other simulators.

The TMG sim is controlled by Mathieu Le Nail who sits in the control room behind a bank of computers programming the £2 million machine.

I ask Buemi how close to the reality the Sim is. ‘Of course no Sim can replicate the G-force on your body,’ he says, ‘but for accuracy and feel, when it has been programmed properly, it is the same.’ The same.

You climb a ladder to reach the cockpit and then feed yourself into the F1 monocoque where you find one pedal for each of your feet. The clutch is on a lever on the steering wheel, just as it is in the race car. You use it only to move away from rest. Suddenly and even with headphones clamped to my ears, my head fills up with sampled sounds of the TS030’s electrically assisted 3.4-litre V8 motor. It really might as well be the real thing. I have to pull a paddle to select first gear, then progressively release the clutch to get the ‘car’ rolling.

Luckily, I know the track but the Sim is still damnably difficult to drive.

You get the same obscured view as the race drivers, and then there’s the TS030’s performance… you have to completely recalibrate your idea of what a car can do.

The acceleration is relatively easy to understand but the braking is ridiculous: the Highway Code advises a stopping distance of 94 metres for a car travelling at 70mph: I was braking at 130 metres to slow for the first gear hairpin at Mulsanne from comfortably more than 200mph. But most difficult to understand is the cornering power of the simulated TS030. In slow corners there’s actually less grip than you expect, but in quick curves it seems simply to defy physics.

That’s not all the Sim can do. It can replicate bad weather and provide different characteristics to simulate different compounds of tyres and how they behave when they start to wear out. In fact anything that affects the way the race car behaves can be accurately replicated on the Sim.

The Driving Simulator has changed the way Toyota develops its racing cars. Buemi calls it ‘one of the most useful tools we are able to use.’

Whereas in the past there was no choice but to test every new component and set up change, now a vast chunk of this work is done in the Sim. This saves not only time and money but the number of hours Toyota’s drivers are exposed to the unavoidable dangers of driving racing cars around tracks.

And if everything goes according to plan, before long it will also become instrumental in delivering to Toyota the World Endurance Championship.