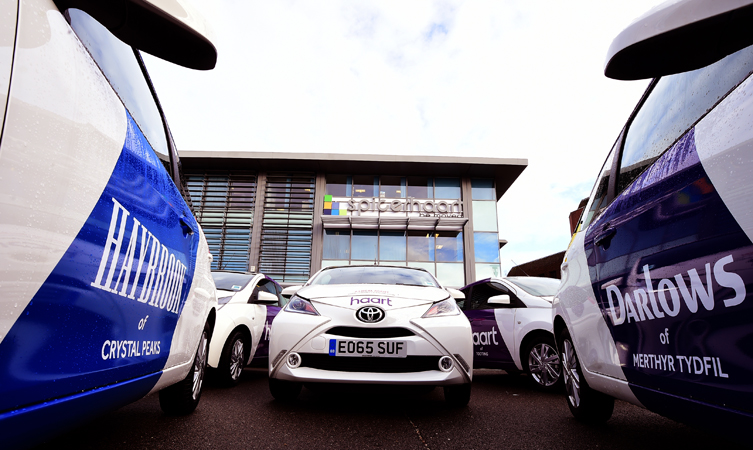 Each Aygo will be fully wrapped in the group’s corporate livery to give it a stand-out street presence. The cars, to be delivered over a two-year period, will be used by staff for travel between offices and client properties across the country.

Spicerhaart estate agents has its roots in the east of England, where the original Spicer McColl was launched with just three branches in 1989. Today it is an influential and trusted business, operating nationwide. Its steady growth has brought the development of an extensive portfolio of property services and the acquisition of other notable estate agency brands.

Chris Howell, Spicerhaart’s fleet manager, was pleased to add Aygo to the group’s fleet of more than 1,000 vehicles. He said: “We found the lower company car tax and lower CO2 emissions very appealing, and we also liked the fact we would be creating a fleet of very distinctive cars that will really help us stand out.”

The model chosen is the five-door Aygo x-pression, which attracts a benefit-in-kind tax rate for company car drivers of just 14 per cent in the first year. Official combined cycle fuel economy of 68.9mpg keeps fuel costs down. Like all Aygo models, the x-pression produces less than 100g/km of CO2, which means no annual road tax (VED) bill. Spicerhaart’s staff will be travelling in comfort and safety, with equipment features including air conditioning, eight airbags, height-adjustable driver’s seat, front fog lights and a handy split-folding rear seat.

Neil Broad, General Manager Toyota and Lexus Fleet Services, said: “Aygo is winning the hearts and minds of thousands of people nationwide who, like Spicerhaart, are impressed by its stand-out styling, impressive reliability and compelling day-to-day cost profile. We’re delighted Spicerhaart has chosen Toyota and are sure Aygo will deliver the performance, economy and individuality the business is looking for.”