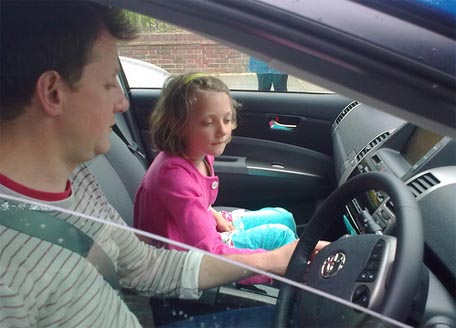 Earlier this week Tamsin blogged about our family day out in the Prius. She mentioned that I found the cruise control a real benefit in the city. This may have seemed a bit surprising, so I thought I’d explain why it worked for me at 30 mph.

I’m a reformed speed freak. Just not a very good one. While I’ve worked hard to master the art of cruising the motorway at 70ish, round town I still struggle. I’m a heartfelt advocate of the 30mph speed limit, and the 20mph restriction in residential zones also gets my vote. But while the spirit is willing the flesh is weak. It’s not like I don’t want to keep it slow, I’m just not at all good at it. I genuinely find it a real struggle to prevent that creep towards 40, as my heavily endorsed licence testifies. Which is why I thoroughly enjoyed my recent encounter with a Prius, and specifically its cruise control feature.

Cruise control is of course nothing new, but it’s something I’ve always associated with the indulgence of executive cars and high speeds – gobbling up the miles on the motorway without having to unduly trouble one’s calf muscles. But the Prius takes this age-old technology and co-opts it into the urban context, giving it a whole new meaning in the process.

Certainly the most fun I had with Toyota’s hybrid was around town, where I soon discovered the entertaining (and incredibly virtuous) game of striving for the highest possible mpg reading.  Cruise control is essential in this noble quest.  As soon as I hit 29mph or so on an open stretch (didn’t need to be very long), I’d flick the lever and hey presto, there I’d stay, pootling along in an utterly responsible and entirely satisfactory manner.

In this state the electric motor would hum into life with pleasing frequency and the car seemed almost to glide along of its own accord, freed from the forces of either man or petrol engine. The mpg count would climb pleasingly, while at the same time I sat, calves at rest, completely free from my ever-present internal struggle against excessive speed. It’s a genuine win-win, and easily the most relaxing driving experience I’ve ever had. And I love the fact, while the Prius is full to bursting with utterly modern technology, it takes a function that’s been around for donkey’s years to get the most out of it.