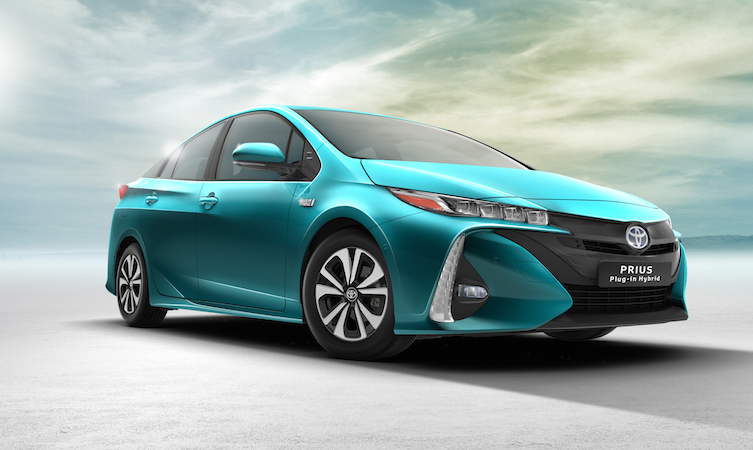 It’s set to follow to formula of super-efficient plug-in hybrid driving, while making significant steps forward in its EV performance in terms of driving range, power and maximum speed.

Toyota pioneered plug-in hybrid technology in Europe, paving the way for the introduction of the original Prius Plug-in in 2012 with a five-year vehicle leasing project.

The new model builds on the strengths of the latest Prius, which was introduced earlier this year, while having a distinctive design all of its own. It marks an evolution of the responsive, intuitive, quiet and refined hybrid system that can be found in seven other Toyota models.

Ideal for customers who want a hybrid vehicle and the benefits of extended EV driving, the new Prius Plug-in Hybrid will be available in showrooms worldwide (including the UK and Europe) from the end of this year.

The new model’s Hybrid Synergy Drive powertrain features a larger, 8.8kW/h lithium-ion battery pack, allowing drivers to enjoy the benefits of EV driving for longer periods and improving the potential driving range from a tank of fuel. It posts a substantial improvement in fuel consumption compared to its predecessor, with an estimated average figure of 202mpg, the best rating for any current plug-in hybrid on the market, while achieving a CO2 figure of just 32g/km.

Even when not running in EV mode, Prius Plug-in Hybrid will automatically favour its all-electric drive capability in situations where this can deliver higher efficiency than the petrol engine, most notably when driving around town and on shorter journeys.

The car is equipped with a Toyota-first dual motor/generator drive system, which uses both the electric motor and generator to produce drive torque, helping boost both acceleration and overall performance.

The new plug-in hybrid system further minimises use of the petrol engine, even when accelerating quickly or using the cabin heater, with the adoption of a new battery-powered heating system that improves efficiency in cold weather, and the world’s first heat pump air conditioning system with gas injection.

As a result of these advanced technologies, the new Prius Plug-in Hybrid offers responsive, class-leading acceleration and can be driven at speeds up to 84mph while still in EV mode. The potential EV driving range is more than 30 miles, around twice that of its predecessor. Charging the battery should only take around two hours 20 minutes, in spite of its increased capacity.

In common with all Toyota full hybrids, Prius Plug-in Hybrid can run on a seamless combination of power from its petrol engine and electric motor, or on its electric motor alone. Regenerative braking captures kinetic energy produced when braking or when the vehicle slows, converting it into electric power for storage in the battery, further helping reduce fuel use.

The double wishbone rear suspension adds to the improved handling quality, producing one third the level of shock when driving on uneven roads, compared to the current model. The MacPherson strut front suspension has also been revised to secure better handling with more direct response.

The new Prius Plug-in Hybrid displays a chiselled profile and edgy character lines, and has a more road-hugging look and a lower centre of gravity. Compared to the current model, it is 165mm longer, 15mm wider and sits 20mm lower to ground. As with the standard Prius, the TNGA platform has given the designers a freer hand to craft a car that has richer visual appeal, with lower lines overall and a more athletic stance.

The wind-cheating aerodynamic qualities of its styling combine with the low overall weight of its high-strength bodyshell to make a significant contribution to its exceptionally low energy consumption. Its 0.24 drag coefficient (Cd) is expected to be among the lowest of any production saloon, achieved with a number of advanced design features such as the “double bubble” tailgate glass and an automatic grille shutter which automatically closes when airflow is not needed to cool the radiator.

Weight has been kept to a minimum through extensive use of high-tensile steel in the bodyshell, aluminium for the bonnet, and in a first for a mass-produced car, a carbon fibre reinforced plastic (CFRP) tailgate.

Its status as an individual model within the Prius range is confirmed by a unique lighting signature, created with four-lamp LED projector headlights and LED tail lamps.

TNGA also helps define the car’s “peace of mind” interior. This captures the look and feel of a luxury coupe with its engaging driving position, high comfort levels and four-seat layout, built around a full-length centre console. The design is advanced but functional, inheriting the intuitive concept of previous Prius generations by consolidating the operational functions closest to the driver and the information functions further away.

The dominant centre cluster has a floating design, created using a sculpted, concealed rear mounting. The eight-inch touchscreen allows for easy operation of audio and navigation functions, including flick actions to scroll through the different displays.

The instrument cluster has dual 4.2-inch full colour TFT screens which display information with excellent clarity and sharpness. Their content can be changed using a menu control switch on the steering wheel.

Quietness has always been a distinguishing characteristic of Toyota hybrid vehicles and the new Prius Plug-in Hybrid extends this quality further, using a sound-insulating laminated windscreen and front door glazing to create an exceptionally quiet and calm cabin environment.

Ever since the launch of the original model in Japan in 1997, Prius has maintained its status as Toyota’s technology ambassador, an eco-car that regularly brings valuable next-generation technologies and innovations to the market place.

The technological achievements of the new Prius provide an impressive platform for Prius Plug-in Hybrid to go further, notably focusing on a safer and more comfortable experience for driver and passengers. Features unique to the model include LED projector headlights with vehicle speed-sensitive adaptive beam technology. It also has a new solar roof charging system, equipped with its own battery. This technology was first demonstrated on the Auris Hybrid Concept in 2010 and is now making its first appearance on a production Toyota.

The intelligent S-Flow automatic air conditioning system has been made smaller and lighter and uses less power. A new electric compressor provides quieter operation and the system automatically detects whether front and rear passenger seats are occupied, adjusting airflow accordingly to achieve the most efficient operation.

In Prius Plug-in Hybrid this system marks a world-first by using a heat pump with gas injection. This allows it to cool or heat the cabin when the vehicle is running in EV mode, without the petrol engine being brought into play.

Other features shared with the standard Prius include a wireless phone charging tray beneath the centre stack and a colour head-up display, presenting information such as vehicle speed, battery charge, hybrid system status and Toyota Safety Sense function clearly on the base of the windscreen, so it can be seen without the driver having to take their eyes off the road ahead.