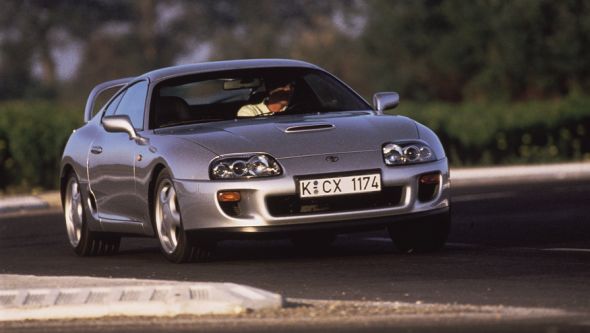 It’s celebration time here at Toyota, and everybody is invited to join in!

Twenty years ago, on 24 August 1993, the most powerful and exciting of all Toyota vehicles was launched to the world. That car was the fourth-generation Supra; a grand tourer coupe that combined hell-raising performance with supercar handling and continent-crushing comfort, yet was as tractable and easy to drive as any other Toyota.

Now that we’ve reached 2013, the Mk4 Supra (also known by its ‘JZA80’ chassis code) has matured beyond its teenage years. However, it is recognised as one of the most iconic and celebrated cars to have ever come out of Japan. Twenty years on, the Mk4 Supra remains the most powerful road car Toyota has ever put into mass production, while in the hands of aftermarket tuners its comprehensively over-engineered 2JZ-GTE 3.0-litre straight six engine has been proved to be capable of producing well over 1000bhp. It has also proved itself beyond question in the demanding world of motorsport.

Little wonder that the Mk4 Supra continues to enjoy enduring popularity among Toyota enthusiasts. Indeed, numerous owners’ clubs dedicated to the model have been formed throughout the world, many of which feature active discussion forums and busy social calendars.

Within the UK, the Mk4 Supra Owners’ Club is probably the most popular of these groups, and it is celebrating this milestone anniversary with a huge get-together at the Heritage Motor Centre on 26 August, details of which can be found by following this link. Toyota GB is sending representatives to cover the event for this blog, so look out for a report in a future post.

We’re also celebrating the anniversary of the arrival of the MkIV Supra with a retrospective look at the impact this most powerful and exciting of all Toyota vehicles had in the UK.

AN HISTORICAL PERSPECTIVE
What were you doing in 1993 when the MkIV Supra was launched? To help jog your memory, it was the year cinema-goers were transfixed on the vibrations of a glass of water in Spielburg’s Jurassic Park. The Maastricht Treaty took effect, formally establishing the European Union, and births of another kind occurred for three members of the boy-band One Direction. Buckingham Palace opened its doors to the public for the first time, while consumers had the opportunity to buy a bagless vacuum cleaner and computers boosted with Intel Pentium Processors.

WHAT LED UP TO THIS SUPRA’S ARRIVAL?
Though the Supra name has become synonymous with the fourth-generation Toyota Supra, the name was assigned to three preceding generations of sporting Toyota vehicles. These laid a foundation for the arrival of 1993’s most powerful and exciting derivative, as well as changed people’s perspectives of the performance potential within the grand tourer class.

Read more about the history and development of the Supra line in this comprehensive post.

WHAT DID TOYOTA SAY ABOUT THE SUPRA?
What official information was available to members of the press when the Mk4 Supra was launched in 1993? After being filed away for almost two decades at Toyota GB’s headquarters, we are delighted to be able to re-release the original press pack as a PDF download.

Original sales brochures for the Mk4 Supra command significant second-hand prices due to their rarity and the strictly limited numbers of vehicles that were allocated to the UK each year. Once again, having tracked down one example in Toyota GB’s archives, we are delighted to re-release the brochure to the public as another PDF document download.

WHAT DID THE MOTORING PRESS SAY ABOUT THE SUPRA?
Now that all of Toyota GB’s official information on the Mk4 Supra is available to digest, what did the independent motoring press have to say about the car? Below are a few excerpts.

MotorSport: “Wild and alternative, this is the brashest Supra yet… Two small air-intercooled turbos are operated individually or sequentially, depending on engine speed, so not only does the [engine] produce a useful 326bhp at 5600rpm, but 90% of the whopping 325 lb/ft peak is available all the way from a measly 1300rpm to 4500. Given its flat torque curve, the engine is, of course, supremely flexible. The power is immense, and at 100mph plus, when the aerodynamics play a more important role, the Supra just knuckles down and flies along with such impressive stability that it feels like half the speed. Bends throw up greater challenges to the ‘intelligent’ componentry. Switch off the TRC and, with such an abundance of power, brutal powerslides are possible – and satisfying.”

Autocar & Motor: “With a power-to-weight ratio of 210bhp per tonne (compared with the 149bhp per tonne of the old [Supra]), then-and-now performance comparisons serve only to speak ill of the dead. Performance, grip, chassis control, refinement, build quality and equipment” are the highlights. At the end of the article, the Supra was summed up as “a great engineering achievement”.

Road & Track: “The Supra’s grip is tremendous. Its balance through the slalom and resistance to roll mark it as one of the world’s best-handling cars. A Supra with this magnitude of road-rocket performance could be history in the making.”

MotorTrend: “The driving environment is similar to that of a sport/luxury [saloon]. The front seats are roomy, comfortable, and power adjustable. Noise is muted. Plus, its fold-down rear seat… adds an extra degree of passenger and cargo-carrying versatility.”

Road & Track: “No matter how you turn a Supra, it comes up performance. With a shape that looks to be in motion even at rest, and a performance envelope that more than backs up what that sexy sheet metal promises, the Supra… [has] no doubt given other sports car designers many restless nights.”