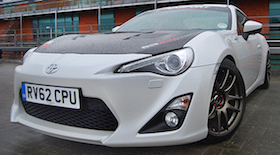 Complete with a turbocharger, lowered suspension, new wheels and modified carbon fibre body parts, Christian’s GT86 is one of the wildest we’ve seen in the UK to date.

The Rome native, aged 34, bought the car from Jemca Toyota in Bracknell in  December 2012, after a GT86 caught his eye in a car park. However, he’d owned the car for more than a year before deciding to modify it.

But why change a car that has won so many plaudits for its engineering?

“It’s part of my life, it’s one of my passions,” he says. “It’s not just an engine or a piece of metal, a car like this grows with you as you change it.

“By customising your own car, you can choose all the modifications and you can really feel the car because you have helped recreate it; but if you buy a supercar, it comes ready prepared. This car is 100 per cent my car.”

Christian took his extensive wish list to Toyota tuning specialists Fensport. He knew exactly the enhancements he wanted and the repercussions of making them – from fitting a larger radiator to cope with a higher performing engine to using the right oil. As well as the radiator adjustments, the clutch had to be reconfigured along with tyres, suspension, springs and cooler system.

As a result of the modifications, Christian needs to take a bit more care of his car. As well as using the specialist oil, which he provides to Jemca when it is in the workshop, he services the GT86 every 3,000 rather than 10,000 miles and the oil filters need changing more regularly.

As unconventional as the car he drives, Christian dresses top to toe in luminous green futuristic clothing and biker boots, with a blue Mohican hairstyle and two studs protruding from his chin – he says that his style is an extension of his personality.

He says: “My Italian employers wanted me to shave off my Mohican and dress in the way they wanted. So I handed in my resignation. They were making a judgement on how I look and not my skills or my knowledge. I haven’t found that in the UK.  I have always been different and I like to express myself in the way I look. I love my Mohican and blue is my favourite colour.”

He added: “I would really like to drive my car from the UK home to Rome, even if it does cost me around £2,000 in petrol!”

You can see a full gallery of pictures of Christian’s GT86 on the Jemca website.

Note: If you’re interested in modifying your Toyota, please bear in mind that doing so may invalidate its warranty.

It’s always best to speak with your local dealer before carrying out work. Don’t forget your insurance company will need to know too.